2019 was a good year for me. Any year without illness or (major) injury is a good year, although I do still experience symptoms of my bike accident. It would have been nice to run a marathon PR, but race day weather wasn't in my favor, and I know the training I did will be a strong foundation for future cycles. Running healthy and strong is my first priority and I did that! 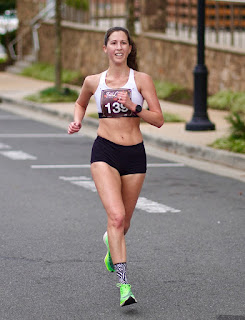 15 Races, 129 Race Miles
This is a typical number for me in a healthy year, particularly because I tend to run a lot of 5Ks in the summer. Here's the breakdown:

I should also mention my DNF at the Shamrock marathon. I got over that pretty quickly and moved on.

2,695 Miles logged
I set a new record for most miles ever logged in one year! I took 28 days off total, and my longest streak was 122 days in a row. 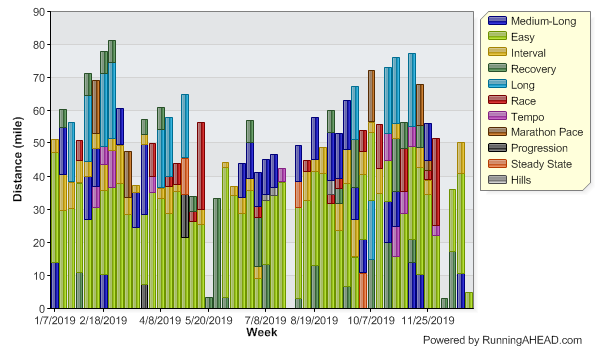 My highest weekly mileage was 81 when I was training for Shamrock. I ran 37 track workouts and 14 runs that were 16 miles or longer (not including the marathons). 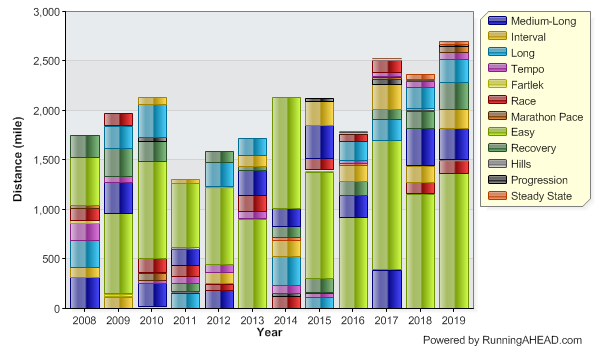 Looking at the yearly mileage graph, I'm happy to see that at the age of 41, my body is allowing me to do more training than ever. Not shown on this graph is the strength training I did. I followed a program from June to October, stopping once my mileage became really high and intense.

In terms of weather, my coldest run was 10 degrees Fahrenheit, when I drove into Arlington to find a non-icy surface. I bought a treadmill later in the year, so I might never run in 10 degrees again! I avoided the heat as much as possible, and my hottest run was 73 degrees-- the Leesburg 5K. The Sugarloaf Marathon wins the prize for the rainiest, with rain pouring down in what felt like buckets for the last 10 miles.

12 U.S. States and 6 Countries
I also set a record this year for the number of places I've visited and run in. I was able to combine two of my business trips with races!

Countries:
New Running Gear
I acquired a lot of new running gear and tools this year that have really helped with my training.
My Book
Finally, my book, Boston Bound, is still going strong. This year it sold about 500 copies, which is amazing for being its 3rd year in print, and I didn't do much to promote it.

Previous Years in Review
I'm running a New Year's Day 5K tomorrow, and I'm excited to see how it goes. Happy New Year to all my blog readers!
at 11:08 AM