The Glass is Half Full, Not Fully Empty

It's times like these that truly challenge me to think about the type of runner I am: Why do I run? What am I hoping to accomplish? What does my running say about me as a person?
I'm faced with this mysterious injury that was diagnosed as IT Band Syndrome, but I think it's some other sort of knee injury. It's my left knee, and my upper calf/outer shin is somehow also involved. Whatever it is, it forced me to cut back my mileage last week, including reducing a 17-miler down to 7.5 miles. I have not run since Saturday, and the chances of me completing a 20-mile training run this coming Saturday are slim to none.
It's not so much painful as it is awkward, and I can tell that something is strained or pulled or out of alignment. (They are draining my pool this week, so swimming is not even an option. . . but that rant is for another blog!)
So what to do about the Houston Marathon on January 13? Unfortunately, the race's deadline for switching to the half marathon is tomorrow-- over three weeks prior to the actual race. I would think that they would at least give us until Monday because then we could make a decision based on our last long run. When I ran the Miami marathon, you could actually decide to switch to the half during the race, and you could be scored as a half-marathon finisher, complete with a half marathon medal. With Houston, not only must you make up your mind so far in advance, but you are also charged a fee of $10 to switch, even if you are downgrading. So, switching to the half means paying the price of the full marathon, plus an additional $10.
But once again, I digress. . . The bottom line is that I had to make a decision before tomorrow's deadline. And this decision made me think about my core beliefs and goals as a runner. The likelihood of me setting a PR at Houston would be very low. Considering my only long run between Richmond and Houston would have been a half marathon on December 1, a PR would definitely be a stretch. So how important is a PR to me? Is it worth putting out all the effort to run a full marathon if I know, in advance, that I have almost no chance of attaining that goal? Would I be happy if I revised my goal? How much of marathoning is about setting and attaining goals, and how much is about the experience and the fun? Or knocking another state off my list so I can be one step closer to 50 marathons in 50 states?
I was faced with a similar decision for Chicago. I really wanted my next marathon to be sub 4:00, and I knew that I had missed so much training that it wouldn't be possible in Chicago-- well before anyone knew about the heat wave. I decided not to run Chicago because I didn't want to "half-ass" it. I like to put 100% of myself into everything I do, and I knew that Chicago would not be my best effort. I know that my streak of PRs at marathons has to end eventually. They can't all be PRs. But when that streak ends, I don't want it to be because I ran a marathon just for the sake of it-- fully knowing that a PR wasn't realistic. I still want to be able to say that I gave it my all.
I know that many runners would disagree with me, and would be happy just to have another marathon under their belt. I think that if I ran the Houston marathon, I would struggle in the last 6-10 miles, I would not be happy with my time, and it would lower my confidence as a marathoner. I don't want to run this marathon just because I can, I want to run it because I've trained properly for it and "earned" a finish time that reflects my hard work.
Therefore, I have decided to run the Houston Half Marathon. If my knee gets better within the next week or so (which is very optimistic) then I at least have a shot of getting a PR, or at least running a solid race. And I won't have the pressure of a full marathon looming over my head for the next few weeks, when I know that I am not prepared. I am typically excited and happy about upcoming marathons, but I think this time, I would be more scared than anything. This way, I can take it easy for the next week, allow my knee some recovery time, and then ease back into training.
If I am lucky, maybe I can work in a 10 or 11 mile training run two weeks prior. Just like Chicago, the Houston marathon isn't disappearing anytime soon. If I really want to run it, I can do so at a later date. That said, I wish this race was organized like Miami, where I didn't have to pay extra to switch to a shorter race, and make that decision so far in advance. Considering that Houston bibs are selling for over $200, I could have actually made money on this, had I dropped out completely!
After a great deal of reflection, I'm confident in my decision. I plan to continue to only run "quality" marathons. Other distances can be for fun and training, but until my marathon PR streak breaks, I will only run them when I think I can put forth my best effort. (I might revise this if I am somehow injured for London- I have to run that one no matter what!) I'm still looking forward to Houston, but more because I will get to see my friends than for the actual race.
at 4:50 PM No comments:

Frozen All The Way 10K

The name of the 10K I ran today was actually "Jingle All The Way" 10K, but I wasn't doing much jingling, as I opted not to wear the bells on the shoes that they gave me. The weather was about 36 degrees and misting rain. This race sets the record for the coldest race I have ever run. The windchill at the half marathon last week made that race seem colder at times, but when it wasn't windy, it wasn't that cold. And it's different when it's sunny and you're dry-- like last weekend. Today was a very dreary, cold, wet day. In spite of all this, I toughed it out in my red snowflake skirt.

Carlton and Michael Hayden came up to run the race with me this weekend. We're quite a team! Carlton was hoping to set a new personal record, and Mike wanted to run his fasted 10K of the year. My goal was to break 49 minutes. I definitely thought this was an attainable goal, given my current fitness level and my past races. However, the 10K has always been my worst distance. I am never sure how to pace myself. I can run negative splits at marathons and half marathons, and I can gun a 5K pretty well (usually) but I am still uncertain what the best 10K strategy is.

My PR for the 10K was a 49:55, which would have been a lot faster, if there hadn't been such a huge hill during the last mile. I can't ever seem to catch a break with the 10K distance. It's always too hot, too windy, too hilly, or too cold!

Mile 1
I think I went out too fast. Carlton disagrees, but a 7:35 pace was way too ambitious. I felt good during that first mile, but then slowed down shortly afterwards. I was thankful that I had warmed up because my legs were freezing and so was my face. If it hadn't been for the run from the car to the start, I would have been frozen solid!

Mile 2
There was a very slight hill here, but nothing really noticeable. Otherwise, the course was flat. And I had run most of this course during the Marine Corps Marathon. My nose was freezing. I managed to run a 7:46. Perfect! This was the pace I was hoping to maintain for the rest of the race.

Mile 3
During mile 3, I saw Carlton on his way back toward the finish line. I was really surprised to see him, because I fully expected Michael Hayden to be ahead of him. I was excited for Carlton, but wondering what happened to Mike. I saw Mike shortly after, and he was very focused. I felt like I was maintaing my pace, but I actually slowed down to a 8:00 pace for this mile. 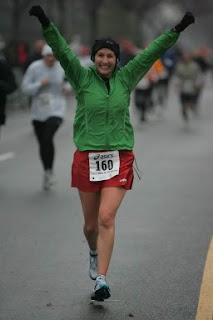 faster than my Turkey Trot 5K! I was psyched! After that, I think I got over-confident and felt like I didn't have to run as hard to do well. I slowed down again to yield a 8:07.

Mile 5
I was uncomfortably cold and I was struggling to maintain pace. People started to pass me. I was getting sick of the race at this point and I just wanted it to be over. I just wanted to maintain my pace and "survive" here. Pace for this mile was 8:08. I started to get mad at myself for slowing down so much. I really wanted to break an 8:00 average pace. I needed to gun the last mile.

The last 0.2
I decided to really give it my all at this point and makeup for my slower running earlier in the race. I felt like I was sprinting, but according to my watch, I was only going at a pace of 8:25.

Looking back on this race, I really wish I would have pushed harder. I pushed as hard as I could while Carlton was there, but I think I lost a lot of motivation and enthusiasm once I saw how much time I "banked".

I feel lukewarm about this. I was happy to PR, but I thought that my 10K PR was really not reflective of my running abilities at all. According to most running calculators, I should be able to come in well under 49 minutes. Baby steps, right? I don't know when my next 10K will be, but it might not be until June, when I run the Lawyer's Have Heart 10K.
at 3:09 PM No comments: