I try to be optimistic about my races if I believe I gave them my all, but this one was a flop! That's okay, we all have flops, even if we try as hard as we can. 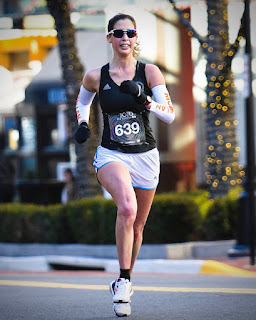 After 2016/2017 they stopped running that race which meant transitioning to New Year's Day from New Year's Eve. I could have returned to the Fairfax Four Miler to stay on the "eve," but that's a nighttime race and I don't see well in the dark. So on New Year's Day 2018, I ran a 5K in Ashburn. I didn't care for that race so in 2019, I ran the 5K in Reston. I also didn't care for that race, but there seemed to be no better options, so I showed up again this morning. Even though the course isn't great, it's a =PR= race, and they are always well organized with the awards being gift cards to their stores. And the same familiar faces show up so it's nice to see my friends!

When I ran this race last year it was warm and I was sick. My time was 21:35, and I figured I could beat that by a lot given that I wasn't sick today, and we had cool weather. I set a goal of 20:50. Yes, that's nearly a full minute shy of my 5K PR but I am not in 5K shape right now and this course is challenging.

Before the Race
The race started and finished in the Reston Town Center, where my office is conveniently located. After getting my bib, Greg and I went to my office where I attached my bib, put sunscreen on, used the bathroom, and laced up my shoes. Greg had decided not to run this race because he had recently set a huge 5K PR on Thanksgiving and he was satisfied with that. Plus, he had a new camera lens and he wanted to take photos of me.

The race started at 10:00am, so at 9:30, we left my office and I began my warm up. I decided to warm up on the W&OD trail where most of the race would take place. I do training runs on this paved trail all the time so I am very familiar with it. I mentally prepared myself for the 5 hairpin turns and narrow path that would lead down to the trail and then back up again afterwards. That path, which is about 0.2 miles each way, is the reason I don't like this course and probably won't do this race again.

As I was warming up, I saw Greg and my friend Cheryl getting ready to take photos. I also had a Maurten Gel about 20 minutes prior to the race start, which I washed down with a cup of water from the aid station. It was 41 degrees and sunny, which felt amazing. Aside from the 10 mph headwind during the 3rd mile, this weather was just about perfect.

After the 2-mile warm up, I lined up to start the race. I started chatting away with some people and completely forgot to get my Garmin ready to go. Before I knew it, the announcer was counting down "3. . . 2. . . 1" and I realized my GPS wasn't located. Oh well, I guess this meant I would use my Garmin as a stop watch rather than a GPS device. I would manually lap the splits at the mile markers.

Mile 1
Maybe it was for the best that I wouldn't know my pace until the first mile marker. I would simply run by feel. I think that's what I did last year since I was sick and I didn't want to push it. After about a quarter of mile, it was time for hairpin turn #1 to go down the narrow path with the tree roots sticking up. It was a nice long decline, which I could have gained a good bit of speed on if it weren't so crowded. It was nearly impossible to pass anyone and you had to be really careful with your footing to avoid tripping. I saw a few people trip, but they did not fall. 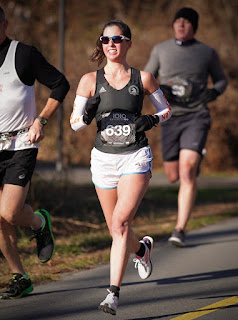 At the bottom of the path came hairpin turn #2 onto the W&OD trail. I was so relieved to be off that path. The trail itself is also quite narrow, but at least the pavement was smooth so I didn't have to watch my footing. My Garmin beeped for its autolap, and then I manually lapped it at the first mile marker. I added the numbers together for a first mile of 6:34. Not too shabby!

Mile 2
I knew to expect the photographers Cheryl and Greg shortly after mile marker one. Once I saw them up ahead, I realized I was in the middle of a pack and it would be hard for them to get photos of me. So I surged up ahead of the pack and I surprised myself with my ability to do so. That gave me confidence so I held that surge pace (or close to it) all the way down the incline. I glanced down at my Garmin and saw 6:27, and I was happy with how everything was going.

But then we turned around (hairpin turn #3) and ran back up the hill into a 10 mph headwind. The wind wasn't horrible, but it was enough to be an annoyance. At this point, I was running right next to my friend Hannah. I figured if I could keep up with her I would be in good shape. Mile 2 was 6:45. I definitely slowed down on the way back up the hill after the turnaround.

Mile 3
I was mentally prepared for this mile to be a killer. I told myself to stay with Hannah and do whatever she did. But she surged up the hill and I could not keep up. And then I felt dead. I questioned if I would be able to finish. All of sudden I felt extremely sluggish and like I had nothing left in the tank. 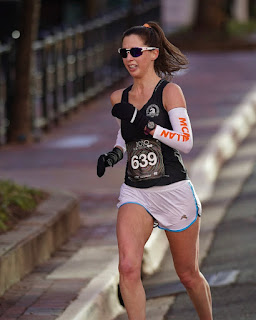 Just when I thought I couldn't feel any worse, hairpin turn #4 came and it was time to run the 0.2 mile back up the narrow path with the tree roots. I feel like being so careful with my footing while trying to push up the hill and watch out for other people was sucking the life out of me. That path seemed to go on forever. It seemed so much shorter on the way down! People were passing me, including women, which I didn't like, but I couldn't go any faster. I was crashing hard core. Hannah was no longer in site and my only goal at that point was to keep running and not stop.

Mile 3 split: 7:21. That's around my marathon pace! According to Strava, I did an 18-mile training run in October on this same segment and I was faster during the 18 miler. Yikes!

The finish
Once we were back on the road, I was able to really pick up the pace and run 5:44 average for the last 0.12. And it was uphill! It felt so good to be on evenly paved road that I hammered it.

After the Race
I felt like death after crossing the finish line. I had sprinted it in so hard. I hugged Hannah and then saw her husband Alex finish. Eventually I reunited with Greg and I told him how hard the race was. Brutal! I ran a 1-mile cool down and then met Greg back in my office building where he was transferring the photos onto his phone.

I learned that I won first place in my age group out of 82, which was nice. There are benefits of being 41! I was the 12th woman overall, and I think I was in 6th or 7th place at the turnaround point. As I said, I got passed a lot, which usually does not happen. I collected my award and then had brunch with Greg, Cheryl and Allison (who had shown up just for the brunch!) We also got to meet Hannah and Alex's baby Luna for the first time.

Final Thought and Takeaways
I would like to blame that narrow path with its hairpin turns and tree roots for my crash-and-burn, but my bonk started before the final path. I might have been able to recover some speed at that point if I had been on paved road, but I think that watching my footing so carefully robbed me of my mental energy that I needed to focus on pushing up the hill. I would say that next time I should be less focused on the ground and more focused on my running, but I'm a cautious person by nature so that would not happen. 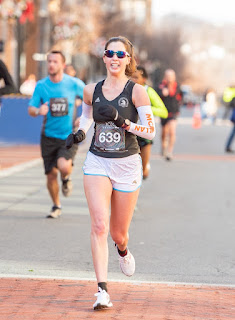 During the race, multiple people cheering me on when I was going "back" on the out-and-back. I don't know who they all were, but I assume they were Instagram followers. It was nice to have the encouragement and it did perk me up when I was feeling so crappy.

One person fell down and injured herself somewhat seriously. I think the W&OD is too narrow to accommodate a race of this size, and on the way back, I could see the runners on the way out jam-packed into one lane of the trail.

All in all, I did give this race everything I had, but I expended too much mental energy on that stupid path and the hairpin turns. I'm also coming off of a little break post-marathon so I am not as sharp or as fit as I would like to be. This is why I had a goal of 20:50, which is almost a minute slower than my PR.

This race fuels my fire for the 10K I am running in early February. I plan to run that a sub 6:40 average pace, which would be faster than this 5K pace. With a full month of training and a hairpin turn-free course, I am still confident I can do it!

I'll chalk this race up to a hard effort on the first of the year, resulting in an age group win. And brunch with friends. I'm not sick, so I'm already off to a better start than I was last year. 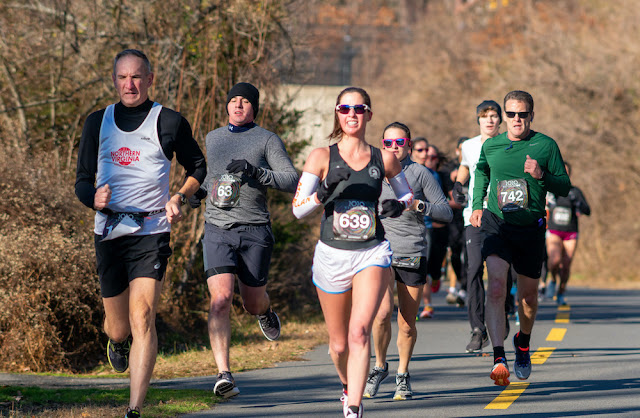