The day I ran faster than I drove

I ran the Wirefly National Half Marathon in Washington DC this morning. In its second year, this marathon is rapidly gaining in popularity. It drew people from 48 states!
Unfortunately, those people didn't get a very scenic or historical view of Washington. The only notable landmark that the course passes through is the Capitol, at the beginning of the race. Otherwise, the course goes through run-down neighborhoods of the city. No nice view of the Potomac river like in the Marine Corps marathon. No view of the monuments or the White House. Just dirty, run-down neighborhoods.
I ran this race with my good friend Lauren, who I referenced in a previous blog. Lauren and I headed out to the race just before 6:00 a.m. in my car. It took us approximately 25 minutes to drive to the parking area near the start line. It was dark and raining, with a temperature of about 48F. I had debated over what to wear, but finally settled on shorts and a heavy long-sleeved top with a quarter zipper.
Before the race started, we had some time to stretch and use the porta-potties. The rain tapered off a bit and I suddenly became very warm in my heavy top. I was worried that I would get too hot, and at certain points during the race, I wished I had chosen something lighter weight.
The race was relatively uneventful. There was very little crowd support, and I was surprised becausethere were about 5,000 runners (both full and half). It was nothing like the Marine Corps Marathon where tens of thousands of people swarm the streets and crowd the sidewalks to catch a glimpse of the runners. The lack of crowd support and dreary weather took a slight toll on my mood, so I didn't have the excited spirit as I typically do when I race.
My strategy was to begin at a 9:00 pace and then gradually decrease to an 8:20. My goal was to break my record of 2:00:25 set in 2005, when I ran my first half marathon. But I really wanted to come in under 1:55, because my training indicated that I was capable of doing so.
My first mile was 9:18, and I followed this strategy (somewhat) until mile marker 11, at which point the hills began to take a toll on me. I typically don't track splits on my watch-- I just let the timer go and remember my splits in my head, and I do the math. This was the first race where I actually used the split feature. The first ten miles were paced as followed, according to my watch: 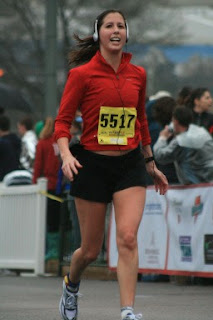 Mile 1: 9:18
Mile 2: 8:41
Mile 3: 8:51
Mile 4: 9:03
Mile 5: 8:46
Mile 6: 8:50
Mile 7: 8:32
Mile 8: 8:44
Mile 9: 9:07
Mile 10: 8:12
I was not expecting the last 5 miles to be so hilly: It was hill after hill after hill. And it really seemed that there were more uphills than down hills. Once I hit mile marker 11, I started to slow down. I usually increase my speed dramatically at the end of a race, but I simply could not do it today. I don't think I went out too fast-- if the course were less hilly I probably could have sped up.
Mile 11: 8:41
Mile 12: 9:22
Mile 13: 9:20
I ran to the finish line at a steady pace-- I didn't get my "finish line adrenaline". I think more crowd support would have helped. I didn't see any spectators during the last mile. My time for this race was 1:56:27, an average pace of 8:52. I think I ran a good race and I am satisfied with my time. Although part of me wishes that I didn't slow down as much at the end, and I could have come in under 1:55.
I have a week and a day to recover for the Cherry Blossom 10-miler. As far as rankings go, the resultson the Web site ranked the finishers according to gun time (as opposed to chip time), so it's not an accurate reflection of how I did. The competitive side of me hates that!
Lauren and I walked back to my car. As we left the parking lot, we were put onto this road the sent us off in the wrong direction. After getting a sense for where we were, we realized that the road closings from the race were causing major traffic backups. We left the parking lot at 9:20, and did not get out of the city until after 12:00. For about an hour of this time, we were just stuck on one road-- going so slow that I kept putting my car in park and stretching my legs. Just the fact that I could be taking photos while in the driver's seat says something about our immobility.
Once in awhile, we would actually get to move the car forward!!! Essentially, it took us nearly three hours to drive about 7-8 miles. We could have run faster! We could have driven to Philadelphia in that amount of time. And it's not like we could really get mad at the street closings because we actually ran in that race. Lauren and I had some good quality time to catch up, so the car ride wasn't too bad. 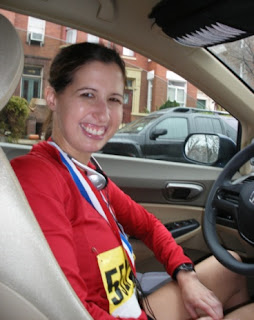 iPod Playlist highlights (in order):
30 Seconds To Mars, "From Yesterday"
Sheryl Crow, "Steve McQueen"
Dishwalla, "Counting Blue Bars"
Chris Daughtry, "It's Not Over"
David Gray, "Nos De Cariad"
Jason Mraz, "Can't Go For That"
The Fray, "How to Save a Life"
Eddie Money, "Take Me Home Tonight"
Nickleback, "Rockstar"
Incubus, "Dig"
Plus 44, "When Your Heart Stops Beating"
AFI, "Love Like Winter"
Red Hot Chilli Peppers, "Save The Population"
Anberlin, "Godspeed"
The Red Jumpsuit Apparatus, "Face Down"
Five For Fighting, "Policeman's Xmas Party"
The Killers, "Bones"
Jason Mraz, "The Remedy"
Anberlin, "There is No Mathematics To Love And Loss"
Red Hot Chilli Peppers, "Especially In Michigan"
Rise Against, "Ready To Fall"
Better Than Ezra, "Hollow"
Anberlin, "Readyfuels"
Incubus, "Anna Molly"
Fall Out Boy, "This Ain't A Scene, It's An Arms Race"
Update: I just learned that the course may have been 0.5 miles too long. This could explain why I slowed down so much at the end. What is up with me and these races that are too long???? This was a USATF certified course, so it shouldn't have been long. If this is the case, then my time for the half marathon dips down to about 1:51. I'll keep you guys updated on what I find out.
Added a few days later:
Today, I received this e-mail message from the Wirefly National Half Marathon race director:
We wanted to make you aware that due to a cone placement error this course was inadvertently .24 miles longer than the 13.1 official distance which race officials had mapped and USATF had certified. While your Official Time remains the same for the event, we are providing an amended section to the posted results.
A cone placement error? Geeze! I suspected that the course might have been too long, but since I didn't see the 12 mile marker, I had no way of measuring my exact splits for the last two miles. Plus, there were hills so I figured I must have just slowed down because of the hills.
As it turns out, I didn't slow down at all. It was nice that they adjusted the results to reflect this extra 0.24 on their Web site. My actual time was 1:54:18, with a pace of 8:43. This means I met my "OMG I am so happy" goal! If you recall my "This race was a success" goal was just to get under 2:00. But my goal that I really wanted was under 1:55, and I did it!
Interestingly PR pace for a half marathon is now faster than my PR pace for a 10-miler! but only by one second (8:44 vs. 8:43). 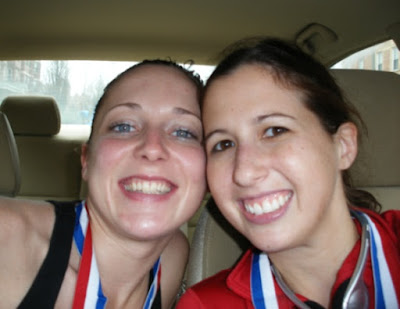 18 Miles on a Treadmill

I set a record today for my longest treadmill run ever. Prior to today, my longest had been 16 miles, when training for the Marine Corps Marathon.
The original plan was to run outdoors. I was going to park my car, run 9 miles to a location where I would meet up with my friend, and then we were going to run 9 miles back to my car. She is running a half marathon next weekend, so it would have served as her last long training run. Unfortunately, the wind combined with temperatures in the 40's made the idea of running such a distance extremely undesirable. Had it not been for the wind, I wouldn't have minded running in 45-degree weather.
I took a pack of Jelly Belly sports bean with me (I always feel so weird eating on the treadmill) and a bottle of water and started my run. I always wonder if other people notice how long I am on the treadmill and if they think I am just obsessed with running, or actually training for something. I had to reset the treadmill three times, because the maximum is 60 minutes. I decided to reset the treadmill every six miles-- here are my splits:
First six: 58:35 (9:46 average pace) including a walk break at the end of each mile.
Middle six: 57:35 (9:36 average pace) including a shorter walk break at the end of each mile.
Last six: 55:20 (9:13 average pace) just one short walk break at the end of mile 13.
I ran the last two miles at a much faster pace, and I felt like I could have gone even further. I got sort of bored and not wanting to run anymore at around mile 12, but once I hit 15, I got a second wind. My overall time for this run was 2:51:30, yielding an average pace of 9:31. Spread across a marathon, I would get a time of 4:09:48, which is what I am hoping for in New Jersey at the end of April.
My feet have shrunk. I have run all my marathons in Brooks Adrenaline size 6. My size 6's feel way too big now, and I am more comfortable in the 5.5's. I ran this run in my size 6's and I stopped several times to tie them tighter for more support. I am now debating which shoe size to wear during the marathon. Do I wear the size 6 like usual? Or the size 5.5? This could make a huge difference in how my feet and legs feel.
I wore a new sports bra. For me, the biggest running "gear" challenge is finding a supportive, dry-wicking sports bra that doesn't chafe (even with body glide). The sports bras designed for bustier women don't support me whatsoever and the extra wires that those bras have are painful. I've decided that the best approach is buy an Extra Small sports bra (despite my cup size) and just cram these things in there so they can't move. I tried it today with a new sports bra and it worked!
My schedule for the next few weeks is as follows:
March 24: 9 miles (if anyone thinks I could do more and not have my 10-miler suffer, chime in!)
April 1: Cherry Blossom 10-mile race
April 6: 20-mile training run
April 14: Running the last 10 miles of a 50-mile race with Michael Hayden
April 21: 8 miles
April 29: New Jersey Marathon
All you runners who are reading this, please feel free to offer advice on this plan. I haven't done much trail running, so I need to be very careful doing the last ten miles of that Ultra with Michael. If I feel like the hills and the terrain are too much, I will stop and just do a longish run on Sunday.
at 12:26 PM No comments:

Hills, Spit and a Mis-measured Mile

How to run a marathon: tips for race day