I ran the Cherry Blossom 10-miler this morning in Washington DC. I was really excited about this race for a number of reasons. First and foremost, since I DNF'ed the Shamrock Marathon, this had become my "goal race" for the spring season. With a soft PR of 1:10:24, I figured I could beat that by at least a minute, and probably dip under 1:09. All of my workouts indicated that a goal pace of 6:50 was appropriate and I was prepared to crush it. In the days leading up to the race, I felt awesome. My legs felt strong and peppy, with no lingering fatigue from high mileage marathon training. I slept well and I had a relaxed mindset. The life stress that I had mentioned prior to Shamrock had somewhat subsided, so I was in a good spot both physically and mentally.

The only question was the weather. The forecast called for 54-58 degrees with around 90% humidity. Thankfully the skies were overcast. I decided that I wasn't going to adjust my pacing or strategy for the weather. I was still going to shoot for a 6:50 average pace. However, any warmer or sunnier and I would have likely made an adjustment.

For many runners, these conditions would be ideal. For me, I run best when it's in the upper 30's. In fact all of my current PR's were set in temperatures below 40 degrees! I always say that if I'm not wearing gloves, I'm not PRing. BUT, once again, today's conditions were by no means "bad". They just weren't ideal for me. I knew this, but I still wanted to shoot for a 6:50 average pace because I didn't want to set limitations on what I could do. I didn't want the weather to become a self-fulfilling prophecy.

Before the Race
Even though I love the Cherry Blossom 10-miler, I do not love the packet pickup situation. In years past, the expo opened at 1:00pm on Friday, and I was able to go during my lunch break. But this year, it didn't open until 3:00pm, which meant trying to leave the city during Friday rush hour. And that could take well over an hour.

So Greg and I drove into the city yesterday to get our bibs. It took us about an hour to get in, maybe 30 minutes to get the bibs, and about 45 minutes to get out. Not horrible, but if the expo had opened earlier on Friday, we would have saved a lot of time and hassle the day before the race.

I slept relatively well last night and woke up refreshed this morning and ready to race. Greg and I ate our typical bagels + peanut butter, and brought Generation UCAN with us to drink 30 minutes before the start of the race. We left the house at 6:00am, and arrived in the city by 6:35. Not bad at all!

We parked about a mile from the start line, warmed up, went to the bathroom and got into the corral about 10 minutes prior to race start. Large races in DC can be logistical nightmares, so it was a relief that everything had gone smoothly with regards to parking and getting to the start on time.

My pace goal was 6:50. Greg didn't really know what to shoot for. He just PR'ed his marathon 5 weeks ago, but then took some time off and hadn't done much speed work since. He also didn't do a ton of speed work during his marathon training cycle due to an ankle issue. We knew his endurance was solid, but we weren't sure where his speed would land him.

Miles 1-3
The race started and I felt amazing. Of course, the first half mile is mostly downhill, so it's easy to start off really fast and feel good doing it. I fell into this trap and noticed I had been running a pace of 6:41 for the first half mile, and needed to dial it back some. The mile then ends on an uphill, so that brought my average pace in line with where I wanted it to be. At the same time, I didn't want to be a slave to the watch. I've run enough 10-milers to know how it should feel, so I wanted my body to be my guide.

These miles were crowded. Only at Cherry Blossom and Boston do I find myself running in such a crowded pack! I tried not to weave through people and focused on running the tangents. Because there are so many people, it's difficult to know where the tangents are, but I think I did a great job of finding them.

These miles felt great, and I knew I was tracking toward a major PR. I had a smile on my face and I was enjoying the experience. I knew that Greg was tailing me pretty closely because I could hear him. Since we run together so much, I know exactly what he sounds like when he's working hard. He even caught up to me during an uphill portion, but then I sped ahead on the subsequent downhill. I tend to slow down a bit when going up hills and then charge back down.

Miles 4-7
The race started to feel like "work" starting at mile 4. But the "work" felt completely sustainable. I stayed focused and cruised through mile 4 and 5 pretty easily. I knew that mile 6 would be the toughest of the race. There's a hill that's not too steep but every time it just seems to take something
out of me. I think it's because of where it is during the race.

Greg caught up to me right around the mile 6 marker and then passed me just before we crossed the 10K timing mat. I was really impressed with how well he was doing, given that he had only done speed work twice since his marathon five weeks ago. And. . . it was a bit demoralizing too. As I said, mile 6 is tough, and at the same time, I started to feel less peppy and more fatigued. I told myself "just wait until you get to Hains point-- it will be all flat with no turns and you will feel much better." But that didn't happen. In any event, my official 10K split was 42:43, and I was really excited about that. It's my third fastest 10K ever.

Mile 7 felt WAY harder than mile 6, and this was not a good sign. And even though the forecast showed virtually no wind, I still noticed a bit of a headwind during miles 7 and 8 as we went around Hains Point. It was minor, but given how I felt, it really drained me.

Miles 8-10
All I wanted during mile 8 was to turn around and not be running into the wind. I know, I know, the wind was VERY LIGHT, but it felt so hard. In actuality, the problem was not the wind, but the rising temperature. It was probably around 57 degrees by this point and humid, and my body does not like even a hint of warmth. Regardless, I pushed and pushed and pushed.

I wondered how I would even finish. I kept feeling like "OMG I need to stop right now!" but then I would convince myself to keep going no matter what. I seriously entered a pain cave and I was in a world of hurt. I was barely looking at my watch because I didn't want to get discouraged. All I wanted to do was to finish and be done with the torture.

During mile 9, I noticed that my chest was starting to hurt. OMG- was I having a heart attack? Was I pushing myself into the danger zone? I wasn't sure, but I kept doing it!

People were passing me, but I vowed not to let that get to me. I was doing great. I was going to finish.
I was still in the game and I could still PR. I remembered the 10 mile race I ran last October. I literally stopped for 20 seconds during the 8th mile because my foot was numb. And yet my time was still pretty decent. So today there would be no stopping and my time would be even better.

Finally, we were out of Hains Point and there was about half a mile to go. And it was pretty much all uphill! But I knew that if I let myself fall apart now, I wouldn't PR. And I was NOT going to fall apart in the last half mile of the race. I was too close. Not only did I have to push hard to stay on track to PR, but I had to push hard UP HILL.

So, I did what I always do when I'm racing up hill. I focused on a point about 20 feet ahead of me up the hill, and I ran as had as I could until that point, and then found another point 20 feet ahead of me and ran as hard as I could until that point. And another, and another. This way, I didn't have to look up to see how steep/long the hill was and I just focused on the next 20 feet. It works for me every time and it worked today. 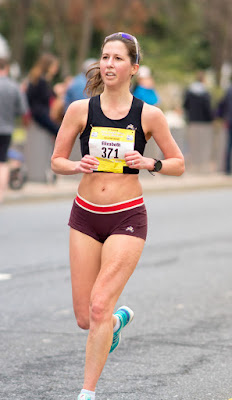 After I crossed, I felt soooooo bad. I met up with Greg (who finished about a minute ahead of me) and it took me about five full minutes to be able to communicate properly. I was a wreck. I was dry heaving. But, I had my sub-1:10.

After the Race
I saw a few friends at the finish line but I could barely talk to them. I was in such bad shape. But ultimately, I started to feel more normal and Greg and I walked back to our car and drove home. I immediately got into an Epsom salt bath and Greg made us coffee. Usually racing suppresses my appetite, so I wasn't hungry for lunch until about two hours after finishing.

Final Thoughts and Takeaways
To simultaneously bonk and PR in the same race speaks volumes about my fitness. And also about my mental strength. So, I'm pretty happy with that. My coach said this:

You're amazing Elizabeth! Most athletes would have given up when your body was starting to turn against you, but you fought so hard and came away with a PR... in conditions that normally destroy you! You should be so proud of yourself; I actually think this is one of your best races because you fought against the thought of stopping but continued to get a PR.

He's right! This is one of best races. Racing is not about running the absolute fastest time in ideal conditions. It's about getting the best out of yourself no matter what and I got the best out of myself. This race was very close to becoming a disaster, but I refused to let it end that way.

Part of me feels like it's not a "real" PR because I ran the first 10 miles of the Houston Half Marathon faster. Of course, it was 35 degrees! All that means is that if I ever encounter a cold 10-miler, I can shave a good chunk of time off what I ran today. I know I had a 1:08:xx in me today, but the weather unfortunately didn't cooperate. Again, today's weather was ideal for many runners, but not for me.

With only six seconds under 1:10:00, I really owe it to rallying during that last half mile, reminding myself that I was still in the game, and believing in myself. If I hadn't done all that, I definitely would have not run under 1:10:00, and I wouldn't be nearly as satisfied.