I thoroughly enjoyed running the Marine Corps Marathon yesterday. The weather was perfect, the crowd support was unmatched by anything I'd ever seen at a race, and I felt strong throughout the entire run.
Everything went well. We got there on time, I wasn't too hot or too cold, my iPod didn't break, I had my lucky timing chip. I saw my friends and family where I expected them.
Before the Race
My friend Jenny, who ran the Delaware marathon and lives in Philadelphia, came down to run this race and stayed with me. The day before we carb loaded at the Pasta Mess tent and then had calzones and an "Apple Pie Pizza". If you add the Halloween candy and other snacks on top of that, I probably consumed more food on Saturday than I consumed in an entire week when I had been previously restricting calories. It felt amazing to eat whatever I wanted and not feel guilty about it.
The morning of the race, we took the metro, checked our bags, and walked to the start line. We run at different paces, so we didn't even try to stay together. But knowing that she was running the race along with some other friends made me feel more supported. I also met a really cool girl at the start line who was running her first marathon. 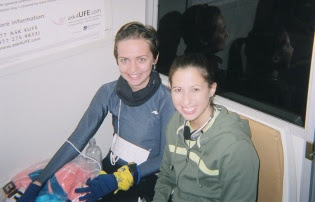 Miles 1-7
I started off wearing two pairs of gloves and a hooded warm-up jacket over my top. I quickly shed the gloves and jacket at mile 1. I ran the first mile in about 11 minutes, but I didn't worry because I knew I could make up the time later. Unlike a 5K or a 10K, if you go really slow at the beginning, you have plenty of miles at the end to compensate. The 2-mile hill at the beginning was not as steep or as bad as I 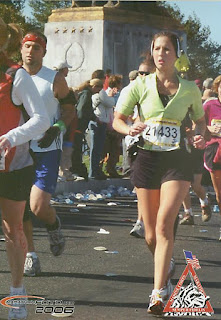 expected, and the downhill was a nice reward. I saw a shirt that said "I have been Carb loading for 25 years".
By Mile 5, the crowd thinned out and I was able to go at my own pace without having to worry so much about the crowd. I ran the first 5 miles in 52 minutes, and then decided to step up the speed a notch.
Miles 8-15
These were very strong miles and they went by very quickly. I passed my friend Mehan at mile 11, and she surprised me with a HUGE sign that said "GO ELIZABETH" in big bold colors. It reminded me of when we were in high school and she hand-made me cards for things. Like when I made the dance team or got into UVA. Mehan has always been very supportive of me-- and we actually met when running "the mile" in 9th grade gym class.
I had been predicting a pace of 4:28, so I was really excited to pass the halfway mark at exactly 2:14. I knew that I was running strong, and I told myself "Okay, just repeat exactly what you just did, and you will be fine!"
Miles 16-23
Someone who had run the Marine Corps Marathon before said "running around Hains Point at miles 17-20 is where most people hit the wall. If you can make it through there, you'll be fine." So, I kept telling myself that I would NOT hit a wall running around Hains point, and that I would enjoy being close to the water with the cool breeze. I actually zoned out and even forgot which mile I was on. I asked someone else and she said we were coming up on mile 19. Funny that I hadn't even recalled passing 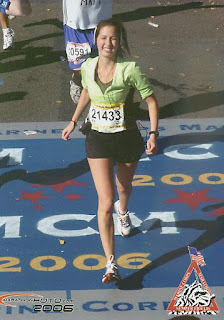 mile 18.
I became re-energized at mile 20 when there was a timing mat and I realized I was going faster than a 10-minute mile. Every time I passed a mile marker, I looked at my watch, and I held a pace of approximately 10:00 for most of the race. The crowd at this point was extreme and everyone was handing out food and candy. I crossed over the 14th street bridge and into Crystal City, where I knew my mother was standing at mile 23. She later told me that I looked like I was at mile 1 because I was so strong and energized, whereas almost everyone else looked like they were actually at mile 23. I was happy to hear that. She said I made her proud, and that made me so happy. When I passed her, she handed me a bag of skittles, which tasted extremely good.
Miles 24-26.2
My legs really started to hurt at mile 24 and suddenly, I really wanted the race to end. For the first time, I felt like running 2.2 more miles would be impossible. But I told myself that I had come this far, and if I kept running at my pace, I only had to survive 22 more minutes. But if I stopped, the wait would be much longer and I wouldn't be happy with my time. So, I pushed my way through these last few miles. 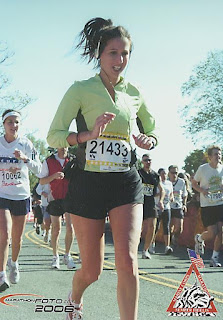 Mile 25 was probably the hardest mile of the whole race because the wind was going about 5-10 mph right in my face. I felt like it was making me run in slow motion. I was really, really tempted to stop, but I refused to let myself stop. I reminded myself of the Philly Distance run where those last two miles were so painful, but I just focused on the music, zoned out and went for it. When I saw the finish line, Igot so extremely excited and I made a sprint for it. I looked at my watched and realized that if I sprinted, I could get in under 4:25. So I powered past everyone, all the way to the right hand side of the course, and came in at 4:24:39. It felt awesome to have such a strong finish.
Interestingly, the VA Beach half marathon took much more out of me than this full marathon. I felt like I was in pure hell for the last 3 miles of the VA Beach half. But then again, the heat was very oppressive and my attitude during the VA Beach half marathon was pessimistic, and I also didn't have my iPod.
After the Race
I thought that the race had been well-organized until the end. Immediately after a marathon, you're supposed to keep walking. But this was impossible because everyone was crowded into such a small space and you couldn't even move. I made it through the food line, and then made my way toward the baggage check to get my things. I found myself on a bridge, packed in like a sardine. People weren't even moving, I was just stuck there.
I met a really nice woman and we started chatting. I didn't like the crowd at all. I felt like I was suffocating and I didn't have my own space to breathe. I don't consider myself to be claustrophobic, and I tolerated this crowd for about 10 minutes. But the longer we stood there without moving, the worse and worse my anxiety got. I calmly told the woman I just met that I thought I was going to have a panic attack. I asked her to please calm me down and re-assure me that there was no reason to panic. But I did anyway. Before I knew it, I was hyperventilating, crying hysterically and having a full-fledged panic attack. My heart was pounding and I couldn't even speak.
Two EMTs came and got me and pushed me through the crowd to an open area. I was still hyperventilating and breathing heavily. It was weird. I just felt like I really, really, needed some of my 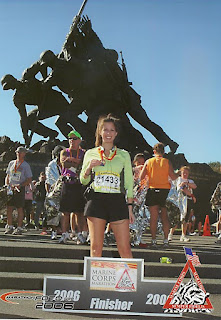 own space-- especially after just having run 26.2 miles. The EMT took my pulse. "You have a runner's pulse". He said. "Well, yeah," I replied. I calmed down and the EMTs walked me to the baggage claim area. That was much less crowded and I was fine.
Soon, Jenny came to get her bag, and we headed for the metro station. Eventually, we made it home, and got massages at a spa near me. We treated ourselves to Carvel ice cream, too. What an incredible high and an amazing day.
Mental Challenge
I strongly believe that a marathon is more of a mental challenge than a physical one. All throughout the race, I kept thinking of all the people that were tracking me remotely (Roderick, Sable, Bob, Ekrem, Tara, My Mom, Jenna, Crayton, Michael H. and others) I knew that you all were rooting for me, and that helped push me through.
During the run, I refused to let negative thinking get me down. I simply did not allow myself to feel weak, tired, or un-supported by friends. If I could do that all the time and not let negative thinking get the better of me, I would be a much happier person. I now realize that I do have the power to control my thoughts (and therefore my feelings) so I can prevent myself from having thoughts that are only going to make me feel bad.
Running never ceases to teach me things about myself and my life. That's why I do it. 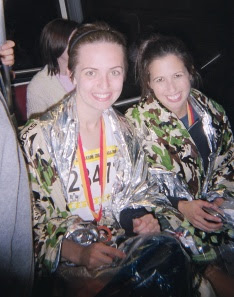