I ran the International Peace Half Marathon this morning in Alexandria, VA. This was definitely the most challenging race I have ever run, for the following reasons:
I ran the first half in just under 1:00. There were no mile markers, but there was a turn-around halfway through the course, so I knew I was half done by that point. I started out very strong. I think I was running a 9:00 pace, possibly even a bit faster. The amount of hills surprised me on the way out because the race director said the course was "mainly flat with two notable hills". I would say that 50 percent of the course was flat, 30 percent was slight hills and 20 percent was steep hills. 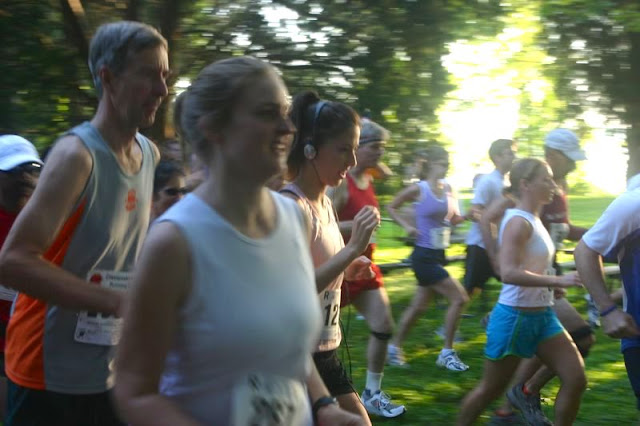 I was going strong for the first half, but I knew that going back would be difficult because of the heat and humidity. I was right-- the heat and humidity really slowed me down. The course was described as "completely shaded", and I would say that it was about 75 percent shaded. On the way back, the sun was shining directly into my face and it was nearly impossible to run. I would guess that the air temperature was in the low 80's, but it felt more like 90 with the humidity. It felt nearly 10 degrees cooler in the shaded areas.
It was such a notable difference that I had to walk during most of the sunny areas on the way back. I've never hit a "wall" during a race, but I certainly did this morning. I hit the wall at around mile 8. Miles 8 and 9 were a combination of run/walk, and then I resumed my pace at around mile 10. These miles are all approximations because there were no mile markers! Mile markers are always my saviors during races. I tell myself, "just get to the next mile marker, that's you goal for right now", and I didn't even have that, or the satisfaction of passing the miles as they came.
A major component of running a long race like this is the mental challenge. Without mile markers, it was very hard to keep myself motivated. Additionally, there was no crowd support. Even the finish line only had about 5 people standing there. Crowd support is extremely important because it provides accountability. It's really hard to stop and walk if there are tons of people cheering you along. It was always nice to go through a water station because the people there were cheering me on!
Even though I had to walk through parts of mile 8 and 9, I did a damn good job for running a race in that kind of heat, with all those hills, and without my motivators. My time was 2:05:40. I didn't have a goal time for this race, so I was very happy with that time. When I was at mile 8, I thought I would be lucky to finish under 2:10. I really pushed myself for the last three miles and I didn't stop once I got past the "wall". So, even though I am not particularly proud of my time, I think it's great considering the race conditions. I am very proud of the effort I put forth.
I was speaking to one of my friends on the phone this afternoon and I told him that this time was over 5 minutes slower than my previous half marathon (which was flat, had no humidity, with mile markers and 10's of thousands of people watching). His response to my time of 2:05 was "so you don't want to kill yourself because of that?" WTF?! Yes, I am usually very hard on myself if I don't get good race times, but with race conditions like these, I can't possibly be hard on myself for not beating my other half marathon time.
One of the things I liked best about this race was that it made me feel like a "real" runner. I talked a little about that in a previous blog entry. This was a race of about 300 people. It wasn't publicized, so you had to be following race calendars to know about it. It's not like the VA Beach half marathon where everyone knows about it and it's many people's first and only half marathon. I'll bet almost everyone who ran today has already run a half marathon and most of them have probably run full marathons. It was hard core-- no mile markers, no crowd, no timing chips, no splits. Just the course (which was shared with bikers because the trail wasn't blocked off for the race) and the runners. I think I saw someone taking photos, and if that's the case, I'll post mine when they get posted.
I probably finished in the lower half, whereas in larger races, I usually finish in the top 20-25 percent. Simply because I was running with people who are really amazing runners.
My main challenge in this race was fatigue. The sun and the hills were really exhausting me. The good news is that I had no pain! No pain in my legs, feet or hips! In the full marathon, my hips started to kill me at mile 5. A few hours after I finished, some calf pain kicked in and I am sure I will be feeling this tomorrow. But at least there was no pain during the race, just fatigue. The exact opposite of the full marathon, where I had loads of pain, but a low level of fatigue.
Afterwards, I was very close to passing out. I kept seeing black spots, so I kept having to sit down, drink gatorade and eat. I felt like I drank plenty of water, I had my Jelly Belly Sports Beans with me (which I ate at mile 7), but I guess the heat just really got to me. I felt this same way after a 21-mile training run last April.