This year was a mixed bag in terms of running. It started out well with a half marathon PR in Houston and my strongest-ever training cycle leading up to Boston. Boston went as well as could be expected given the high winds and heavy downpours, and I was happy with my performance. Then, I was sick for a good portion of the summer and unable to run. I was very cautious about returning to 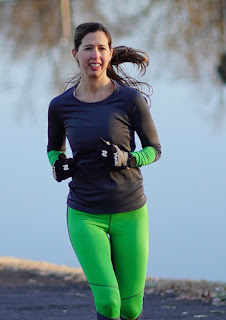 running, and ultimately was able to resume normal training by mid-August.

My first few races back were flops (a ten-miler and a half marathon), and then I bonked my first long run in over four years! This put me in a little bit of a mental rut. I turned 40 in November, which meant entering the Master's division for most races. Then, things quickly turned around for me when I broke 20 minutes in the 5K, and then set a 6-minute marathon PR in 3:15. So the year started and finished on high notes, with some struggles in the middle.

That's the Cliff's Notes version. In my Instagram story, I posted the best 5 and the worst 5 running moments of the year, and I received quite a few messages from people telling me how much they appreciated me talking about the worst moments.

Often on social media, we tend to sugarcoat things and only post about positive experiences. So I decided to focus my year-end blog post on three "lows" and what I learned from them, and how they made the "highs" so much more rewarding.

March 4th: The Rock 'n' Roll New Orleans Half Marathon
Original race report is here.
In this race, I was hoping to set a new half marathon PR. I knew I was in better shape than I had been six weeks prior when I set my Houston PR, and I thought I would be able to shave about a minute off of that time. After the first three miles, though, I realized that the heat and lack of cloud cover was going to foil my plans, so I purposely slowed down. After another couple of miles, the slow down was no longer by choice-- I was bonking. Despite that, I was able to hold a respectable pace in the 7:30's.

This race confirmed, for the ump-teeth time, that my body doesn't tolerate heat. It was only 60 degrees, which most runners found to be pleasant, but without any acclimation or cloud cover, I was baking. When I ran the Rehoboth Beach marathon in December, I ran both the first half AND the second half in almost the exact same time as this New Orleans race. So even though I was bummed in March, it made my marathon achievement in December all the more sweeter-- knowing that I ran that I ran two of those 1:37:40's!

April 8th: The Crystal City 5K Friday
Original race report is here.
I was just finishing off the strongest training cycle ever, having run 320 miles in the month of March, 7 days a week, averaging 72 miles a week. This included VO2 max work each week, so I felt like had 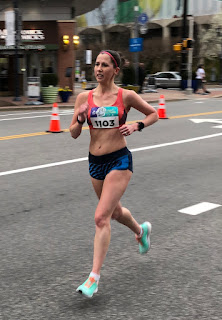 both endurance and speed. The weather for this race was not ideal (a little windy and warm) but since it was a short distance and I was in such great shape, I thought I could PR. That didn't happen. I bonked, feeling like crap during the final mile, and ran a disappointing 20:47, which was 30 seconds slower than my PR at the time.

I was down on myself but my friend Allison (who is always able to offer me a new perspective) suggested that running a Friday night race after a long, stressful day at work wasn't the ideal circumstance to PR. Some of my Instagram followers pointed out that it's unlikely to PR a 5K during marathon training, but I disagreed with that. I still maintained it was possible to PR a 5K during high-mileage training if you had been working on speed.

About six months later, I not only PR'ed the 5K, but broke 20 for the first time during marathon training. In fact, When I ran the Crystal City race, I was about 16 days out from Boston. When I ran the Turkey Trot in November, I was 16 days out from Rehoboth. I was at the exact same point in my training for both races. I learned that Allison's theory of a weekday night race not being ideal was spot-on, and that it was possible to PR a 5K in the midst of high-mileage training.

November 16th: A long run failure
Original blog post is here.
This run hurt. It was meant to be 22 miles, starting at a pace of around 8:00 and progressing to 7:35 by the end. The snow we had gotten the day before screwed up my original route plan, and resulted in a much later start than anticipated, throwing off my fueling plan. To top it off, it was a very windy day.

I could tell by mile 11 that I wouldn't be able to keep up my pace for the remainder of the run. I felt 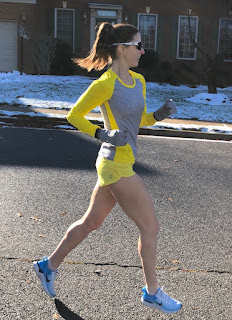 like I was exerting way too much effort for the paces I was running. I slowed down a lot in the 16th mile, and ran a very tortured 17th mile, culminating in me stopping completely. I walked a mile, and then did a very slow jog for another mile to get home. My legs were wrecked, and the next day I ran my slowest recovery run in years because my legs were in such a bad state.

The previous weekend, I had missed my goal at the Richmond half marathon. And four weeks prior, I had been way off of my goal at the Lower Potomac 10-miler. So, mentally I was feeling a little defeated. I did trust that I was putting in the work and that I still had a shot at a great marathon, but I didn't have any training runs to support that belief. Furthermore, the fact that this training cycle got a late start meant that I didn't have a lot of long runs under my belt. In fact, only an 18 miler and a 20 miler up until that point. And the race was three weeks away!

I learned a lot from this experience. First, bonking a long run doesn't equate to having a bad marathon. Although it certainly made me respect the distance and the effort level. Second, you don't need a lot of long runs if you are consistently running high mileage. I only had 3 runs over 15 miles leading up to Rehoboth Beach: 18, 20, 22.

I also learned that the treadmill is not my friend. The day before that long run, I had done my easy run on a treadmill. And even though I kept it to a pace of around 8:50, my legs started feeling sore and achy about halfway through it. I had run a very hard workout the day before, so instead of giving my legs the chance to recover, I beat them up even further on the treadmill, and then proceeded to tackle 22 miles the following day.

Other low moments and final stats
Getting sick over the summer with my mono-like virus was obviously a huge low. Thankfully (or not) I had come down with this summer illness multiple times in the past and I knew the quickest way to recover was to simply do nothing for a few weeks. No running, no walking, no going to work, no leaving the house. With this approach, I was able to go back to work after 4 weeks and I was able to resume normal running after 6 weeks. This is short compared to the 3 months I spent sick in 2012 and 2016.

My total yearly mileage as of today is 2,350. This is my second highest-mileage year ever, and it includes six weeks off due to illness. Last year I ran just over 2,500 miles.

Here are my weekly and monthly graphs for the year: