I ran a marathon!

I ran my first marathon yesterday. What an amazing rush! It was by far one of the best and most memorable experiences of my life.
I woke up at around 5:00 and started the day with a chocolate chip bagel. I got dressed in my racing clothes, double and triple checked that I had everything I needed and headed out of the hotel. I was well equipped with two iPods clipped to my shorts (in case one died), three packs of Jelly Belly sports beans, and a spare pair of headphones for John to hold in case mine died.
Music is so critical for me, that I can't bear to be without it even for a few minutes. The iPod Nano was set to go with a strategically arranged playlist of slower songs at the beginning and faster, energized songs at the end.
The marathon was 4 loops. The first loop was 7.3 miles and the others were 6.3 each. There were water stations at every mile, and the main crowd was gathered around the start/finish line. There were 600 runners, which is much smaller than any of the races I have ever run.
My friend Jenny, who I had met through an online discussion forum, was also running the race. In fact, 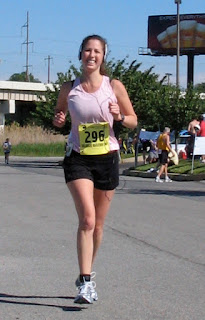 it was Jenny who found the race and suggested that I run it. We were both first-timers and had "virtually" trained together on our discussion forum. We didn't plan on running together because we needed to keep our own pace, and I wouldn't be able to talk to her with my iPod anyway.
The gun went off and I crossed the start line. I was wearing a stop watch so I could monitor my pace and time throughout the race. During the first loop, everything was new. The thought of having to see these exact same things 3 more times though, was a bit daunting. My fingers were numb for the first two miles, but it got warmer during the loop and I threw my jacket to John when I passed him after the loop.
The biggest challenge during the first loop was watching everyone pass me. I knew the pace I had to keep (slower in the beginning), and I knew I wanted to walk for one minute after each mile marker. Everyone was wizzing by me and I felt so slow. But I tried my best to ignore the other runners, and remind myself that I would probably be passing many of them at the end. Another challenge was the mile markers. They were staggered throughout the course, since the first lap made it so you'd reach different markers at various points (ie, you didn't see a sign for miles 5, 12, and 19 as one sign... it was staggered by .2 miles or so). So the challenge was being on mile 4 and seeing signs for mile 23.
I was trying to just focus on getting to mile-marker 5, but then I saw markers for all these really high numbers, and it was nerve-wracking. My strategy throughout the race was to keep an even pace that was slower in the beginning and faster in the end. And to focus only on the immediate goal of getting to the next mile marker.
Toward the end, seeing a mile-marker was a gift from God. When I came upon mile marker 25, I wantedto hug the sign! Instead of one big goal of 26.2 miles, I had 27 individual goals, so the "high" of accomplishing something lasted the entire race.
My hips started to hurt at mile 5. This worried me quite a bit. Usually when I run, my hips hurt the most but the pain doesn't kick in until 10-12 miles. I was in excruciating pain by mile 8, and I didn't think I'd be able to continue on for the rest of the race. It was a shame because everything else was perfect. My feet didn't hurt, my knees and shins were perfect. I was extremely energized and spirited. And yet, I had a really awful pain in my hips. I probably need to work on my stride. I always assumed I got this pain because the trail I train on is slanted. But this course was flat and the pain came much earlier than expected. So, most of the race was run in an extreme amount of pain, but that didn't prevent me from enjoying the experience.
My music kept me going and my determination to run the marathon was powerful. The hardest parts where running through the ghetto areas of Wilmington. Part of the lap was on the Riverfront and it was beautiful. There were a few bands and people cheering us on. But after that first mile, there were few people cheering us on and we were running through alleys and boring neighborhoods. It was so hard to find motivation to run quickly when the environment isn't stimulating. 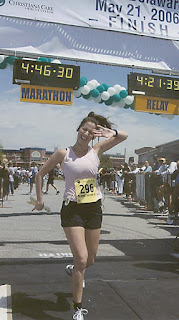 Since it was a relatively small race, at times, there were no runners around me or even in sight! On the first lap I wondered if I wasn't the very last person in this race! Those were the hardest times. I felt like I was running all alone. I think I prefer a smaller race to a larger one, but having people cheer you on really does contribute to the motivation and adrenaline rush. I think my fastest mile was mile 20. I had run a sluggish and painful mile 19, but then I passed the start/finish line, got psyched up and sprinted. I was so full of energy and the pain in my hips didn't stop me from running really fast. It felt like I was running an 8:20 mile for mile 20, and then I slowed down when I reached 21.
I didn't hit the so-called "wall" but the pain became more and more unbearable as I reached the finish line. Instead of a steady pace, I switched to sprinting and walking. I was highly energized, so it made sense to sprint rather than run slowly, because the pain wasn't worse at faster speeds. So, the last 3 miles were a sprint-walk-sprint-walk.
Throughout the race, I wasn't concerned with my time. My goal was to finish. So, I did what I needed to do to take care of myself during the run. I stopped to tighten my shoelaces three times. I stopped to go to the bathroom. I walked while I was drinking water. Not to say I had a "leisurely" attitude-- but I did my best to stay comfortable and I decided I would sacrifice an outstanding time to run a smooth and enjoyable race.
When I came upon mile marker 26 (which I had passed three times at this point) I realized that I was still not in sight of the crowd. How ridiculous! Here I am at mile 26 and there is no one watching! So, I sprinted the remaining 0.2 miles and crossed the finish line. According to John, I was the most spirited and most excited person to cross. I had a huge smile on my face, and I was singing to the Jason Mraz song on my iPod. My time was 4:46:09.
Although I achieved my goal of finishing, I was predicting a finish time closer to 4:30, based on past race results of my half marathon and 10-miler. But those races didn't have the hip pain that I experienced. When I run the Marine Corps in October, I will have a goal of 4:30.
Jenny, my friend who ran this marathon with me, finished about 10 minutes later, and she's registered 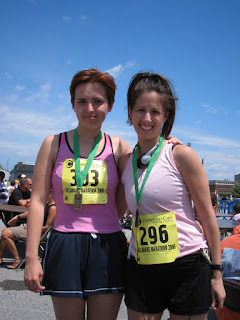 for the Marine Corps, too. Of course, there is Dane-- the guy who runs a marathon EVERY weekend for charity. He was there (although he lapped me!) and finished with a time of 3:13. It was nice having two people that I knew on the race with me.
Crossing the finish line was such a high! I still had enormous amounts of energy and I was so proud to be wearing the finisher's medal. I had trouble walking, but I was too happy to care. I really wish my hips hadn't hurt so bad during the race. My spirits were so high, the weather was perfect, I was well-hydrated, I had plenty of energy all throughout the run. In fact, my sister called me a few hours later, expected me to sound exhausted. But I was bubbly and bursting with excitement. I was surprised at my energy, level too. I was really exhausted after each of my long training runs, and I expected I'd be exhausted after this too.
On the car ride home, I was acting like an over-energized 6-year-old. Runner's high is a real thing! Especially when combined with crossing the finish line of your first marathon. I was so bouncy and I was acting all silly. I had the urge to jump out of the car and run all the way home. Hitting the DC-area traffic jam brought me back down pretty quickly, as you can probably imagine.
Today I am walking with a limp and a BenGay patch, but it's much better than yesterday. Here are the results:
Time: 4:46:09
Pace: 10:56 (seems so slow! I was expecting 10:30)
Division place: 15/19
Gender place: 110/171
Not bad for my first one!
SPLITS
Lap 1 (7.3 miles) 1:19:36
Lap 2 (6.3 miles) 1:08:34
Lap 3 (6.3 miles) 1:08:16
Lap 4 (6.3 miles) 1:10:28
I keep a steady pace! I would have kept it better the last two miles if my hips didn't hurt so damn bad. A fantastic day in every respect. Special thanks to those of you who have supported me throughout this.
at 12:23 PM No comments: