Sooooo many miles. I'm officially training for the Tidewater Striders BQ Invitational Marathon on March 27. That's four weeks away! I had been targeting Myrtle Beach, but they postponed the race, so thankfully I had a backup. This meant three extra weeks of training, which I think ended up being for the best. Typically when I train for a marathon I spend 3-4 weeks in the 70's and that's about it. But with this cycle, I've been running high mileage ever since the start of the year.

Here's a graph of my training since the year started. 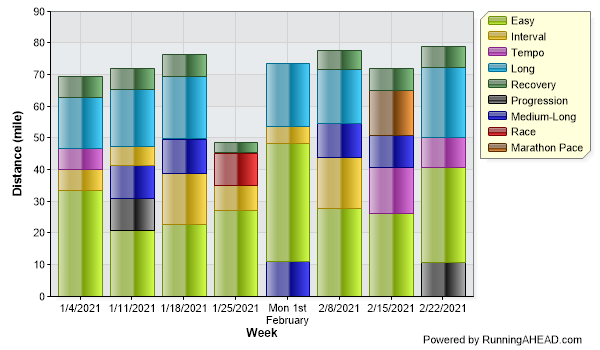 Current Run Streak
I'm on day 66 of my current streak, which started after I took a rest day on Christmas Eve. This run streak has averaged 9.8 miles per day! 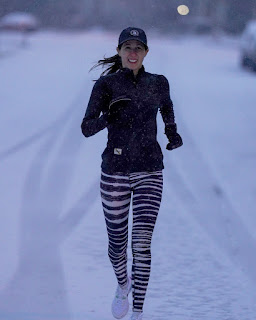 I don't streak for the sake of streaking. Rather, my body can handle running every day without getting injured, and if I feel like I need a day off, I take it. I've been working with the same coach for over six years now, and he knows me pretty well. He knows how to push me without breaking me, and that's always a fine balance to strike.

I logged 302 miles in February, which is more than I get in most months with 30+ days! Thankfully, everything is feeling good, although my legs have been feeling heavy these past few days.

Why, tho?
I often get asked why I run so many miles, and is it really necessary? If I want to run a 3:10 (or faster) marathon, then yes, it's necessary for me. Some women can run a 3:10 on 40 miles a week because they have natural talent. To get to the next level and have another breakthrough, I believe I need to run high mileage combined with strength training. This is all about seeing what I am capable of and getting to my lifetime peak. I'm 42 years old, so I'll probably start slowing down or plateauing soon. Now is the time to see what I can do in the marathon!

I've had to navigate around snow storms and icy roads quite a bit in February so I've adjusted my schedule almost every week! I don't mind doing easy runs on the treadmill, but I really think I need to be on the road to get the full benefit of some of these long, hard workouts. Here are a few breakthrough workouts I am super proud of.
8 x 1-mile with 2-minute recovery jogs (January 21). I had never done 8 mile repeats before; 7 was the
most I had ever tackled! I decided that the only palatable way to approach it would be to avoid the track and run on the road. There is a 1.4 - mile loop near me that has slight inclines and declines throughout which I thought would be a good substitute. That way, I would never pass the same spot during one rep, and all reps would start and end in different places.  I knew that the small hills would mean it wouldn't be as fast as the track but this wasn't a vanity workout—it was about doing the work and making it through the entire 8 reps. 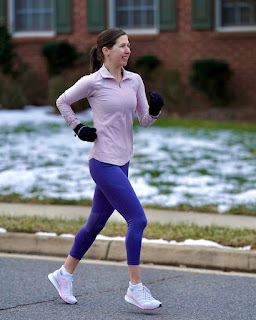 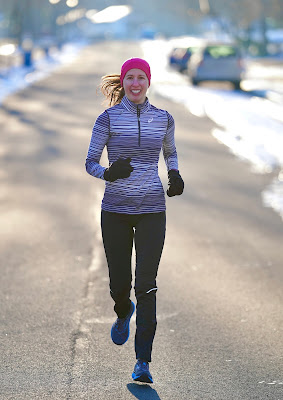 On Instagram, my followers frequently ask me about my eating habits and nutrition. I have answered this question so many times that I figured I should write a blog post with all the details.

In my early 20's, I developed anorexia. I restricted my calories down to about 800-1200 per day and then I also burned about 600 of those at the gym. It had nothing to do with being thin or my physical appearance. I was simply trying to eat more healthfully and all the articles I read in SHAPE and other magazines told me that the fewer calories the better. I received a free body fat assessment at my gym and even though I was at a healthy weight, I was told that my body fat was too high.

I could write many, many blog posts on eating disorders, but that is in my past and I have little interest in

it now. I gradually recovered in my mid to late 20s as I got into long-distance running. This shifted my focus away from food and weight and towards training for a goal. Much of the anorexia was driven by perfectionism and the desire to achieve, and I'd be lying if I said that I didn't bring that same mentality towards my running initially.

It wasn't until my mid 30s when I started working with a sports psychologist (which I have blogged about extensively and written a book about) that I truly freed myself from perfectionism and addressed the other issues that were fueling the eating disorder. The two therapists I saw when I was in the depths of my anorexia were not at all helpful and likely did more harm than good.

Because I was obsessed with food, nutrition, calories, and weight for many years, I no longer have an interest in it and so it's not something I talk about on my Instagram or in this blog.

My mindset regarding food
It's pretty simple: I eat when I'm hungry, stop when I'm full. I try to eat healthy foods by having them around the house, but not everything needs to be healthy. I obey my cravings, especially for sweets, so I am by no means the model of perfect nutrition. I snack frequently. I have breakfast, lunch and dinner. I sometimes eat out. I don't track/monitor/record my food intake like I did in my early 20s. I rarely weigh myself (maybe once a month). I don't try to gain weight or lose weight. I don't follow any specific diet or plan.

Overall, I grade nutrition a "B". Some days a B+ and other days a B-.  It's pretty good but it definitely could be better. I could eat more fruits and vegetables. I could limit my sugar intake. But I'd rather have a healthy mindset about food instead of being super rigid.

Dietary restrictions
While I don't have a ton of rules around food, there are plenty of foods I avoid for various reasons: 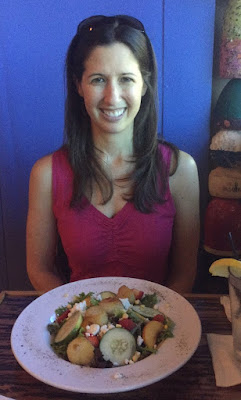 My eating schedule
I wakeup at around 5:00-5:30 and I am not hungry. I start running between 6:30-7:15 depending on the season, and I do not eat before I run. If I am running a workout that has 5 or more miles of speed, then I have half a scoop of UCAN energy powder. This usually only happens during marathon training. For long runs, the same holds true, although now I am experimenting with Maurten as opposed to UCAN.
They say that you are supposed to have protein shortly after a hard workout but I typically am not hungry. Running suppresses my appetite and I usually don't want anything to eat until about an hour after I finish my run, which is about 9:00. If I run an extraordinarily hard workout and put a major strain on my body, I have some cottage cheese immediately afterward for a quick dose of protein to help in recovery.
I usually have a small snack between my 9:00 breakfast and my 12:00 lunch. Then I will snack once or twice after lunch before having dinner at around 6:30. I usually have some form of dessert at 7:30 and then I am done eating.
I recently realized that this means I do not eat for about 14 hours, between 7:30pm and 9:00am, and this is what they tell you do in intermittent fasting. It's supposed to be good for you, but I don't know how much I believe that. My dinner is usually pretty big, I don't wake up hungry, and then running suppresses my appetite, so it's just a matter of not wanting food during that 14-hour stretch. I never get hungry while running, and I can't imagine wanting food while running.
Rarely, I have to use the bathroom mid-run and I hate it when that happens. I won't need to go to the bathroom before the run, but suddenly my stomach will hurt and if I don't find a bathroom within 15 minutes I am in big trouble. Thankfully I know where they are around my most common routes. Thankfully this hasn't happened recently but it can happen as often as twice per month. Our track has porta-potties which I have definitely taken advantage of.
Breakfast
My most common breakfasts are:
Lunch
My most common lunches are:
Dinner
Greg cooks dinner in our house and there are a few meals that we eat regularly, like 2-3 times per month. Typically we aim for a protein, a vegetable, and a carb. We love getting freshly baked bread and having that as an appetizer with a gourmet cheese. Here are the meals we eat frequently:
Common vegetables accompanying our dinners are Cauliflower, broccoli, spinach, Brussels sprouts, eggplant, peppers, squash, fennel, leeks
Dessert
I often have dessert after dinner which is typically something we bought from the grocery store like a pie or cake. Cookies and ice cream are also common.
Snacks
As I mentioned above, I snack a lot. Common snacks that I keep in the house, or that I used to bring to work when I went into the office:
Beverages
I mostly drink water because it's easily available and I need to stay hydrated for my runs. Here are some other things I drink:
Dining out & ordering in
Greg and I do not eat out nearly as much as we used to, but we still do on occasion. In an average week, we cook 5 meals, and the other two are takeout/delivery or going out. We have sushi a few times per month and have Thai food delivered about once a month.
When we go out to eat, we usually order an appetizer and/or dessert, plus the main course. I typically order fish, seafood, or chicken. I absolutely love French fries, so I treat myself when we go out! I'm a picky dessert eater in that I do not like tiramisu, anything hazelnut, whipped cream, or cheesecake. Nor do I like the chocolate/peanut butter combo. I go for ice cream, cakes, and pies. Greg and I always share the dessert.
Post-race and post long-run
As I said above, I usually do not want to eat anything until at least an hour after I am done running. Sometimes as long as two hours. I always follow my cravings, and my most common cravings for after the run are:
So. . . that's it! Nothing too complicated or fancy. I tend to think that I'm a generally healthy eater who enjoys her daily (or twice daily) dose of sweets. I will say that being married to Greg has helped a lot. I don't know how to cook most things, and when I was single I lived on boca burgers, veggie nuggets, and cereal. 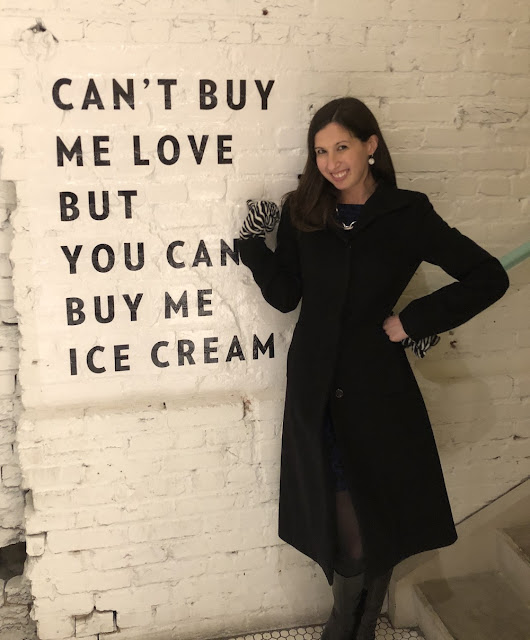