This morning I ran the Crime Solvers 5K, a race organized by Capital Area Runners benefiting a local charity.

This is my last 5K of the summer, and I'm really pleased with my decision to dedicate my summer training to speed and shorter distances. My past few weeks have training have been all about hills, and I have more hill work coming up this week. In addition to workouts that consist solely of hill repeats of various lengths, I've inserted hill sprints into tempo runs and mile repeats. This is a new challenge for me, particularly in the heat, and I have been embracing it. I've even found new terrain to train on, as my traditional hill wasn't long enough for the new workouts, nor was it near an area where I could run a tempo without having to cross intersections.

Needless to say, I've never been more prepared for a warm, hilly 5K race. This Crime Solvers 5K course is almost identical to the Fair Oaks Ambulance Chase course that I ran 9 weeks ago, with the only difference being that Crime Solvers was measured correctly. A slight course modification brought the race down from 3.17 miles (according to my Garmin) to 3.12 miles (according to my Garmin). I had actually talked to one of the race directors about this beforehand, who said she was working on getting the course USATF certified.

Because the course was virtually the same, I knew what to expect in terms of pacing, and I had a good benchmark. I ran a 6:57 pace at the previous race, with the second mile being the slowest due to elevation gain. My splits were 6:50, 7:08, 6:57, and the weather was 56 and sunny. The biggest difference in today's race was the weather. Instead of 56 and sunny like it was in May, it was 71 and sunny.

Before the Race
Having run so many short local races this summer, I've become a pro at my pre-race routine. I arrived at the race, pinned my bib on my shorts, warmed up, and lined up at the start line. My friend Chad was also at the race, only he was running it with a double jogging stroller carrying 5-year-old twins! I can't even imagine how hard that must be! Greg was there too, of course, and unfortunately he is still not able to run because of his ankle break from March. This is how I've ended up with so many race photos for all of my spring and summer races! He's a great photographer and cheerleader.

Chad lined up at the back with his stroller and I lined up toward the front. Before I knew it, we were off!

Mile 1: 6:47
I knew this mile would be mainly downhill and the fastest mile of the race. The first mile of a 5K is often challenging due to all of the weaving. Quite a few runners shoot out at a pace for the first half 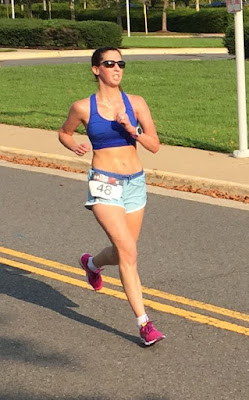 mile that is much faster than they can sustain, so I usually spend the first mile passing a lot of people.

Mile 2: 7:08
My strategy for the race was to push hard through mile 2 because it's the toughest mile of the race. I remembered back to the Reston 10 Miler from March when the whole race was hilly and the uphills were similar to the hills in mile 2. I kept repeating over and over again that if I did it during the Reston 10 miler, I could do it now. Chad also caught up to me with his jogging stroller at the beginning of this mile. I was super impressed that he was able to weave his way through all of those people and run so fast.

Mile 3: 7:03
I was relieved to reach mile 3 because I remembered that it was more downhill than up. I fully expected to break 7:00 based on my memory of the previous race, but somehow that just didn't happen. I was tired, the heat was getting to me and no matter how much I pushed, I wasn't able to squeeze a sub 7:00 mile, but I was close.

Last 0.12: (6:40 pace)
The race finishes on a bit of an incline, and as I turned the corner to see the finish line, I was really surprised to see that the clock was well under 22:00. I knew I was running almost exactly the same pace as I had in the previous race, so my time would be similar. Seeing that I would finally officially break 22:00 in a summer 5K motivated me to gun it for the finish.

My official time was 21:46, making this my 3rd fastest 5K ever, and the only "hot" 5K under 22 minutes. According to my Garmin, my pace was almost identical to Fair Oaks Ambulance chase, but because that course was slightly long for a 5K, my time there was 22:00.

When I compare the two races, I can see significant progress over the past 9 weeks of training. I ran the same pace on the same course in weather that was 15 degrees warmer. And I think I am more sensitive to the heat than the typical person.

I placed 2nd in my age group and was the 8th overall female.

When I compare this race to the Firecracker 5K from 4 weeks ago, my pace was almost exactly the same, but it was slightly warmer today, and the sun was out. It's hard to compare them as closely as the Ambulance Chase one, though, because the Firecracker course is different.

I'll continue to focus on hills next week and then move into half marathon training. My next planned race is the Columbus half marathon, but I will probably run a 5K or 10K as a tune-up for it. 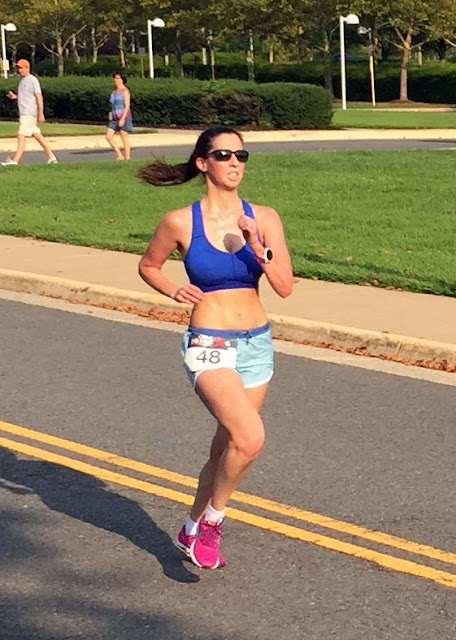 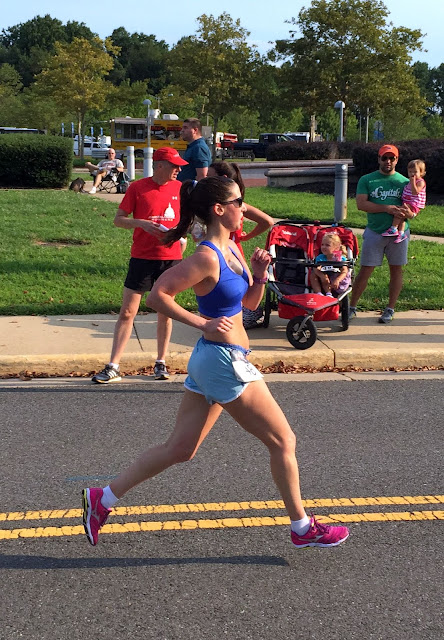