After living in the Washington DC metro area for over 28 years, I finally know why it's called "Capitol Hill" or simply "The Hill" for short. Why? There's a huge hill. And running up that hill sucks. It might be a great spot for such an important building as the U.S. Capitol, but it's certainly not the ideal place for the last mile of a 10K. Unless you're a masochist.
I ran the Capitol Hill Classic 10K this morning. I have often said that the 10K is my least favorite distance, and I find it the most challenging. I can sprint a 5K pretty quickly, and I am good at sustaining a fast pace throughout a 10-miler. But damn that 10K! Also, during the 10Ks I have run in, I have always peed in my pants. (Sorry if that is TMI). Always. I don't do it in any other races, just the 10K.
Today was no different. I peed during the race. I did go to the porta-potty beforehand, but I was leaking for most of mile 4. I don't know why this happens. It's completely involuntary, and it's like I'm just leaking with no control over it. It's so odd that I have never had this issue in other race distances, only the 10Ks.
My fastest 10K race was in June 2005 with a 53:09. But my "personal record" for the 10K distance was set during the Cherry Blossom 10-miler in early April, when I crossed the 10K mat at 50:59. My goal for this race was under 50:00, but I expected I would probably get under 49:00, based on my other races. Hell, if I can do a 8:08 pace during a 10-miler, I should be able to be well under an 8:00 pace for a 10K.
My friend Brianna picked me up at my house and she drove us to the race. There were about 2,000 people running. I wore my zebra skirt and a black tank. No pictures, but there were professional photographers there taking photos. I will post them when they are available. . . if they aren't hideous. 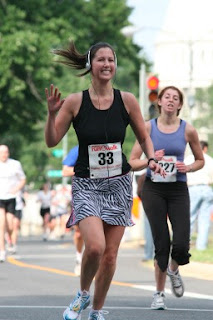 Let's just hope the pee doesn't show.
I noticed that I was one of the few people wearing headphones. Usually, about half the people have headphones. In this race, it was only about 15%. I was starting to wonder if I would be disqualified because of it, but I didn't worry too much.
Miles 1 - 2
I felt strong the first mile. I ran into "Freaky McRunner" (Katharine) who was wearing this awesome yellow tank. (Katharine, if you are reading, that was a great color on you.) We chatted briefly and then we continued on.
The second mile was a slight up-hill for most of the way. But I didn't slow down for it, which means I over-exerted myself. Since it was just a slight up hill, it was enough to take a toll on me, but not enough to cause me to slow down.
Miles 3 - 4
As a result, mile 3 was much slower as I recovered from the hill over-exertion. I actually stopped at the water station during mile 3 and walked for about 20 seconds. I ran into my friend Brianna at this point and we stayed together for the rest of the race. Only I didn't know it because I ran slightly ahead of her, and when I looked back, she was gone. It turns out she was behind me, but there were a few people in between us, so I didn't see her.
Miles 5 - 6.2
All was good until the second half of mile 6. There was this huge hill that was like 0.5 mile. It was major. I had to walk a few times during it. KILLER. I was pissed off about it and everyone was going at a snail's pace up that hill. And then the last 0.2 was flat to the finish. I was so tired. I wanted to walkduring that 0.2, but I didn't. My pace actually slowed during the 0.2. That's how much the hill killed me.
I didn't really enjoy this race. I kept peeing in my pants a little (uncontrollably) and my lungs/chest hurt. My back hurt. My legs were actually 100% fine. But my back. Ouch. Maybe from the hill at mile 2? The course was not scenic and there wasn't much crowd support. It was very similar to the half marathon I ran at the end of March.
Mile 1: 7:44 (feeling strong)
Mile 2: 7:46 (I took that hill way too fast)
Mile 3: 8:19 (recovering from the hill, and walking during the water station)
Mile 4: 7:55 (back and lungs hurting, peeing)
Mile 5: 7:37 (I think they mis-measured this mile being too short)
Mile 6: 8:52 (Huge hill, and I think they mis-measured this mile being too long)
0.2: 1:38 (which is an 8:10 pace, but includes a sprint at the end, showing how much I slowed) 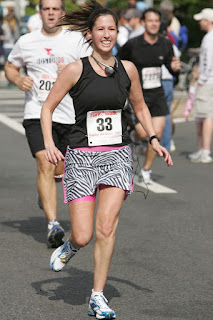 Average pace: 8:02
Finish time: 49:55
33 of 270 women in my age group
108 of 876 women total
I am satisfied with that. But if it hadn't been for the hill, I would have gotten under 49, and my average pace would have been much faster than 8:02. I have another 10K on June 9, so let's hope I can shave a minute off my time. Maybe it's good I got the time I did, because now I have a good goal for the next race.
Brianna finished just a few seconds after me. Since I didn't realize she was behind me, I was pleasantly surprised to hear her name announced as she crossed the finish. Now I can say I have truly experienced "The Hill" and all it's glory.
Next race: The Herndon Festival 5K on June 3.
at 2:56 PM No comments: