Sometimes in racing, things work out better than expected, and that was true for me today!
I ran the Reston Firecracker 5K, which has become an annual tradition for Greg and me. We ran the inaugural race in 2010 and most every race since. One reason I love running the same 5K year after year is to see improvements and set course PRs - even in the heat!
Since 2010, I have run this race every year except for the following: 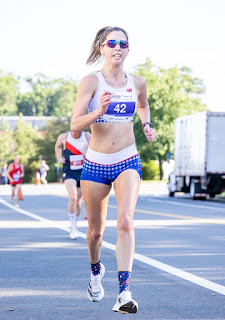 Looking at this makes me realize that mono has interfered with this race 3 times! And last summer I was coming off of an injury so it was more of a tempo run. So before I go any further I will say how thankful I am not to have mono this summer.
Why don't I have mono? I have cut back my weekly mileage into the low 40s. This is low for me, even in the summer. I am only running one hard workout a week and my long runs are no longer than 12 miles. I have been super focused on hydration and drinking water + electrolytes all day long. As a result, my immune system has been happy.
Given that my weekly mileage has been lower than it usually is in the summer (I tend to be in the low 50s) and I have not been running as many speed workouts, I was not too optimistic about running my fastest ever Firecracker 5K. I was definitely going to TRY, but similar to the 10K I ran last fall, I knew that if I was going to PR, it would mean recruiting a ton of mental strength. Being stronger mentally could mean a faster time, even if I wasn't as physically fit.
The time to beat was 21:16 from 2017.
Before the Race
I woke up at around 4:30 without an alarm, after having slept a solid 8 hours. My sleep was really great both last night AND the night before. My FitBit indicated that I got a high amount of deep sleep and REM sleep.
Two hours pre-race, at 6:00am, I had a Maurten Solid and some almond butter filled pretzels. Maurten Solid is a good pre-race breakfast because I am usually not hungry for much real food at 6:00am. I must have gone to the bathroom like 8-10 times (not an exaggeration). It's just amazing how my digestive system always knows that it's race morning and easily empties everything it has!
Greg and I got dressed in our matching outfits and left the house at 6:50. I wore my adidas Adios Pro shoes instead of the ASICS Metaspeed Edge that I had worn in my previous three 5Ks. Why? Because the Adios Pro was white and red, and the ASICS was bright orange and yellow! Matching was a priority for me today! We had picked up our bibs on Saturday so that was one less thing to worry about. We arrived at the race and started our warm up at 7:25. 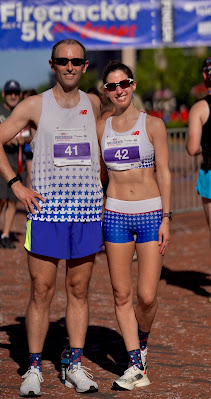 One thing I learned from the Lawyer's Have Heart 5K that I ran a few weeks ago was that I needed a substantial warm up. That race felt super hard to get into at the beginning, so we warmed up for 2.3 miles + a few extra strides. (The warm up for the previous 5K had only been 1.5 miles).
At 7:45 I took a Maurten caffeinated gel. I like to take these 15-minutes pre-race so the caffeine hits just when I need it.
Race Weather Scale
As for my race weather scale, this one is tricky. It was 71 degrees, sunny, with low humidity + a light breeze. Objectively, any race that is over 70 degrees would get a no more than a 3 out of 10. BUT - given that we are in the middle of the summer and it's almost always humid, we really lucked out. We couldn't have asked for much better weather on July 4th, so maybe it would be a 9 out of 10 given the time of year. So, balancing the 3 and the 9 - I give this race weather a 6 out of 10. At 71 degrees, it felt much better than my previous two 5Ks that were very humid with temps in the 60s.
Race Goals
My goals were:
Greg and I finished the warm up about 10 minutes before the race start. That gave us enough time to grab a sip of water.
Mile 1: 6:40
My plan was to go out hard, but not too hard. Since I wasn't planning on looking at my Garmin, I didn't have a particular goal in mind for this split. I wanted it to feel hard, but not all-out. I told myself before the race that in a 5K, mile 1 is supposed to feel really hard, so don't worry about bonking.
Thankfully, there was less weaving in this mile than I expected. It's a large race and usually people bolt out of the start line like crazy, and then I am passing tons of people halfway through the first mile. That didn't happen - most people seemed to be able to maintain the pace they started at with a few exceptions. Greg was way ahead of me, but that was no surprise. When my watch beeped at 6:40 I realized it was much slower than my first mile in 2017, but I didn't judge.

Mile 2: 6:28
This is a fast mile. The first and last miles of the race are net uphill, which means nearly all the decline in the race is during this mile. I was really good about not looking at my watch during this mile. I knew that a pace that looked too fast would freak me out and a pace that looked too slow would discourage me. And I didn't have a target. I just ran.
Mile 3: 6:44
Now it was time to rally. It already hurt so much, but I told myself I had less than 8 minutes to go and I could do anything for that amount of time. I had practiced this moment in my head several times throughout the past week. When you get to mile 3, be super strong. Run hard even when it hurts really badly. Since I had pre-conditioned myself to think these thoughts, they came easily. There wasn't any negativity.
I glanced down at my watch about a quarter of the way into this mile, before the hill started. The pace was 6:50. And that was on a flat surface. The goal was to run a sub 7:00 mile and the rest of the race would be uphill so I told myself that I could do it. I needed to rally. So I drew energy from the runners around me. As I ascended the final hill, which is about half a mile long, I repeated over and over again "strength, strength, strength!" I thought about all my strength training sessions and really focused on using everything my body had to push up the hill. I looked down at my feet and noticed I was "bounding" up the hill, so that also felt like a good work to repeat: Bound, Bound, Bound!
And before I knew it, I had run my fastest final mile ever on that course - a 6:44 up the hill!
The finish
As I approached the finish line, I could not believe my eyes. The clock read 20:xx. NO WAY! Could I actually get under 21:00? In the Firecracker 5K? Seriously? I ran my heart out once I saw the clock, finishing in an official time of 20:57. A course PR by 19 seconds! HUGE! 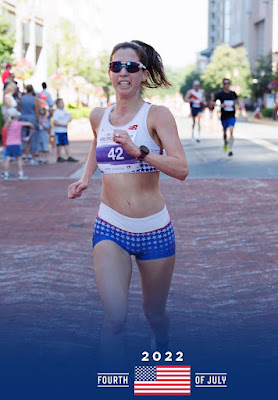 This is the feeling that motivates me every day in training. To feel the satisfaction of all that hard work paying off. Going into a race, giving it everything I have physically and mentally, and having it all come together. I would have been elated to shave just a few seconds off of the course PR, but a sub 21:00 on this course was not something I would have thought attainable today.
Greg ran a time of 19:50. He still had his marathon fitness in him and he ran a really smart race. We paced our races similarly, with the first and last miles being about the same, and the middle mile being significantly faster. I came in 3rd place in my age group and 22nd out of all the women. This race is super competitive. The top seven women finished under 19:00.
Final Thoughts and Key Takeaways
I am really, really happy about this! After having been disappointed with my previous 5K performance, this was a nice comeback. It's also a testament to going into a race really fresh. Low mileage, only one speed workout a week, lots of hydration . . . sometimes less is more. Particularly in the summer.
I was really happy about my final mile, too. I had never run that last mile quicker than 7:00 because of the hill profile. And when I looked at my Garmin early on in the mile, the pace had been 6:50, so I must have sped up as I went up the hill.
This course PR will be hard to beat in future years because we lucked out with the weather. But I was happy that I could take advantage of a nice summer morning to run really fast!
Firecracker 5K History 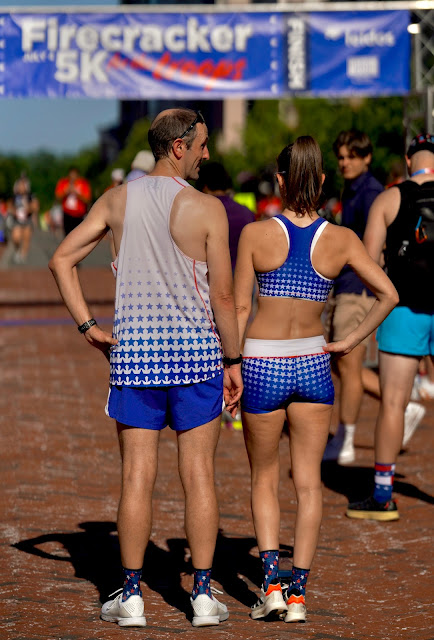