Large races are back, and so am I!

774 people came out for the Reston Firecracker 5K this morning. That's by far the largest race we've had locally since last March! It was a festive morning with beautiful weather, and I was extremely grateful that I was able to keep up with the tradition.

I've run this race every year since it started in 2010 with three exceptions: 2013 (injury), 2016 (mono), 2018 (mono). I even ran the virtual Firecracker last summer! It's hot and hilly, but a lot of runners come out for it so it's always fun! Thankfully I am far enough into my injury recovery to be able to run a 5K.

Before The Race
I had no idea what to expect out of this race. I knew that I was not going to run race effort. So far, the 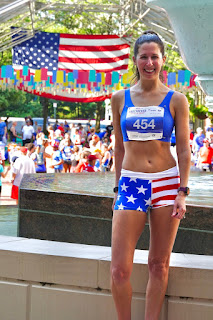 longest I have run without stopping for a walk break is 15 minutes. I have not run faster than an 8:00 pace since the marathon in March. I thought it would be a good idea to run it at a medium effort, increasing to a hard effort at the end if I felt good. And definitely no looking at the Garmin! The whole thing would be run based on feel.

Two hours before the race I had half a serving of the Maurten Drink Mix 160 to top off my carbs and electrolytes. I didn't eat anything. I foam rolled and used a massage ball on my glutes, quads and hamstrings. I made sure everything was really loose.

Greg and I arrived at the race shortly after 7:00. We already had gotten our bibs so there wasn't much to do other than use the bathrooms and walk around. At 7:40, I had a caffeinated Maurten gel and we started our warm up. I also did some drills and glute activation exercises. We ran into Hannah, Alex and their daughter Luna and it was nice to see friendly faces! The warm up was only 0.75 miles. After all, it would be a new milestone just to run 3.1 miles nonstop, so I didn't want to wear myself out during the warm up!

It was around 67 degrees with about 25% cloud cover and a light breeze. The low humidity made it feel heavenly and I was actually chilly before the race started. This was probably the nicest weather this race has ever had, and of course I was not in shape to really race it!

I was thinking I would probably run somewhere in the 25:00's. If I was having a good day, then the 24:00's were possible. I've been averaging around 8:30 for my training runs so with a little extra effort, I thought I should be able to get under that.

Mile 1
Greg and I planned to run the whole thing together, and I would set the pace. We started farther back in the

corral than we should have, so there was a lot of weaving in the first mile. I knew I needed to take it easy during the first mile, so I started out at what felt like marathon pace effort-- something I could sustain for a very long time. As we progressed through the mile things got a little harder, but totally manageable.

Mile 2
Mile 2 is mostly downhill. It's always the fastest mile of the race by far. I decided to coast along and let gravity do its thing. The effort level was a little harder than marathon pace as I gained confidence that I could push harder and still be ok. We passed many runners and nobody passed us. I made sure to stay focused on my form, to run with my glutes and to drive the knee forward.

Mile 3
This mile is always killer. From about 2.5 until the finish, it's one big long up hill! I had to really work to get up the hill without slowing down. And as we closed in on the final uphill stretch I gunned it and sprinted to the finish. It was so fun to be chasing down a finish line in a large race setting. Oh how I have missed that feeling!

I was shocked when I looked at the clock and I saw that the first two numbers were 22.  WHAT?! I had no idea we were going that fast. I totally expected to see something in the 24s!

When I finally looked at my Garmin I saw I ran a time of 22:37, which matched the official results. Good enough for 5th place in my age group, and I wasn't even racing at full effort! My splits were 7:15, 7:00, 7:06, and a pace of 6:51 for the last 0.18 according to my Garmin. I was really surprised, especially since I could have raced that much harder than I did. That felt like marathon pace for the first mile and then a tempo run for two miles.

We didn't do a cool down, but we did walk around the race for a little while and socialized with friends. We then had brunch with Cheryl who had been there taking runner photos. I have her to thank for the photos in this blog.

Final Thoughts and Key Takeaways
This was a really good run for me. And it's totally shocking that I could run that fast when I haven't run anything faster than 8:00 since March. Even more shocking that I did it without a ton of effort. It definitely wasn't easy, but it felt totally controlled and manageable.

I don't have any speed work on the schedule for the next two weeks and I am totally fine with that. July is all about building my base back up so I can begin marathon training by mid-August. The woman who has been my strength training coach for the past year is also now my running coach! It just made sense to have one person managing my running and strength. My previous coach was amazing and I advanced so much under him, so it was not an easy decision. But after 7 years, I figured it might be nice to change things up a bit and experiment with a different approach. She also coaches under Greg McMillan so I will remain a McMillan runner!

I'm very thankful that I had a pain-free run and that I continue to progress. This is all very encouraging. 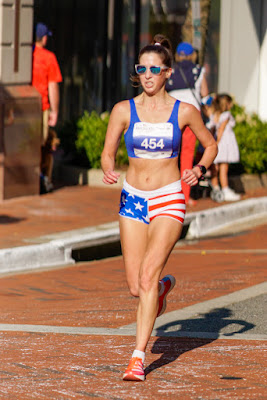