I ran the Lawyer's Have Heart 5K in Georgetown, Washington DC this morning. I have a very long history with this race. It used to be a 10K, and now they have both 5K and 10K options. It was my first race ever back in 2005 (unless you count the 2-miler at my college reunion). I had a streak going every year from 2005-2012, but then a beach trip came up in 2013, which ended the streak.

I ran the 5K most recently in 2017, back when I had been solely focused on the 5K for months. That season, I was able to gradually get my PR down from 20:50 to 20:17. My Lawyer's Have Heart time was 20:24, which was just 7 seconds off of my PR at the time. I was very pleased with it because this race is almost always hot, so being close to a PR is a major achievement.

Before the Race
I didn't sleep well last night or the night before. I am not sure why, but both nights I got between 6-7 hours of sleep and it wasn't restful sleep; I kept waking up. Also, I had a minor cold which lasted 3 days about a week ago. It started on Friday morning with a sore throat and my symptoms lasted for 3 days. I took Friday, Saturday, and Sunday off from running. I felt better by Monday, but I probably wasn't 100% until Tuesday or Wednesday. I'm thankful it wasn't a major illness, but it was annoying because I keep having these breaks in my training, and I just want to be consistent. 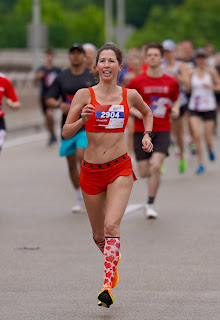 Anyway, I woke up at around 3:30 this morning and didn't fall back asleep. I had an anxiety dream about Greg being at the start line of the Chicago Marathon. I was going to run it with him, but I was somehow on the other side of a mountain. I had to climb over the mountain to reach him at the start line. Other people were climbing over it just fine, but I could not. I woke up with my heart racing and then there was no falling back asleep. Sigh.

For breakfast, I had a small banana and a Maurten SOLID. "SOLID" is a new Maurten product that can replace a pre-run meal. I felt very well hydrated and I had been doing an excellent job at staying on top of my water and electrolytes.

Greg and I left the house at 5:30. He was not running the race, having just raced a marathon less than two weeks ago. I wore my Zensah heart socks, because they totally matched the theme of the race. Lawyers Have Heart benefits the American Heart Association. If there had been an award for best socks, I would have won it.

We arrived at the race site, parked, and picked up my bib. It was raining lightly, and I debated if I should wear my visor or not. I decided I would wear it because it was lightweight, and if it started raining harder, I would want to keep the water out of my eyes. I warmed up for about 1.5 miles + strides and drills, which probably wasn't enough. When it's warm/humid, I usually opt for a shorter warm up so as not to get overheated. But as I age, I feel like I need more and more time to really get those legs moving.

Weather
The weather did not match the forecast. As of last night, my Wunderground app was saying 70% humidity, 66 degrees with no rain. That's not too bad for June. In reality, it was slightly warmer (I'll call it 67) but with 90% humidity and light rain. On my race weather scale it gets a 3 out of 10.

During the warm up, the rain started to lighten up, so I found a place to stash my visor, as Greg was already at his first photo location. I took a Maurten caffeinated gel 15 minutes before the start of the race.

Mile 1
The race started and I decided to be relaxed at first. I had read my 2017 race report last night and based on that, I planned for my first mile to be my slowest. The first quarter mile of the race is underneath a freeway, so you can't rely on the Garmin to tell you what pace you are going.

As I started running, I immediately felt suffocated by the humidity. I felt sluggish and I just could not get going. There was a hill up ahead, and I did what I could to get up it, but that was really, really rough.  Once I was up the hill, I finally got into a rhythm, but I felt exhausted. I could tell it wasn't my day but I immediately dismissed that negative thought and was determined to give it everything I had.

I ended up running the first mile in 7:03. That was definitely a disappointment, and I felt like I was running much faster than that. 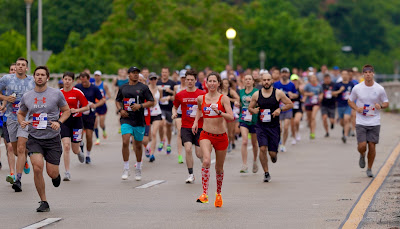 Mile 2
This mile went by pretty quickly and I started to feel a little better than I had during the first mile. This is why I think I really need a longer warm up, even for hot/humid races. It's difficult for me to move fast until I've been moving fast. I need that momentum. It didn't used to be this way, but it could be a product of getting older and everything feeling stiff and rigid.

Anyway, I passed a good amount of people during this mile, which made me happy and I averaged a 6:48, which still wasn't great, but far better than the 7:03 from mile 1. 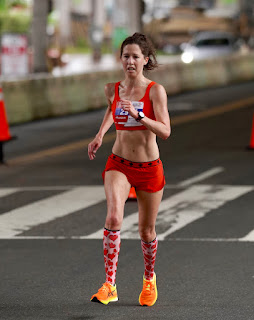 Mile 3
I knew from my 2017 race report that this mile would be super fast. I ran it in 6:24 back in 2017. And at the Dulles Greenway 5K, my last mile was 6:20. (And that was flat!)  With this mile being downhill, there was no reason why I couldn't run in the 6:20s. So I gunned it early on in the mile and I kept that effort level up the entire way. Could I have run at this effort level earlier in the race? Maybe. But it didn't feel like I could have at the time.

I noticed that there were no women runners around me during this mile. I had no idea how many women were ahead of me because the 5K and the 10K start together. I guessed it was a lot because many fast women had shown up! So there was no woman for me to chase down, but I had fun racing the guys.

I made the final turn, and clocked in at 6:31 for the final mile.

The Finish
I was really surprised to see Greg taking photos so close to the finish line, because I thought I had already seen him a bit further back! Apparently there was someone else in a blue jacket with a nice camera. That shows how focused I was just getting to that finish line. I had a decent final kick and finished in a time of 21:09.

I retrieved my visor from its spot and then met up with Greg.  I then cooled down for about 12 minutes before we returned to the car.

I was the 9th female finisher out of 582. And I didn't even place in my age group because many of those 8 women ahead of me were in their 40s. Tough competition! 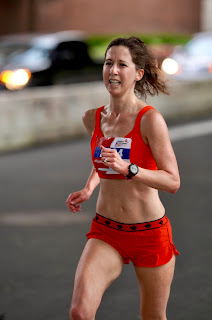 My overall feeling about this race is that I didn't have a ton of energy and the humidity seemed to impact me more than it typically does. And it typically impacts me a lot! I was probably a combination of:

I am not trying to make excuses, but rather identify why I didn't have as much energy as I typically do.
This was all validated by my heart rate. My heart rate was much lower than expected! My heart rate averaged 168, and it usually averages in the high 170s to low 180s for a 5K. If it's humid, that's more like the mid 180s. So according to my heart rate, I simply wasn't working very hard. And I would agree with that. I didn't push as hard as I was physically capable of during the first two miles because I felt crappy.
As I mentioned earlier, I think a longer warm up would have helped too. If I could run a 3.6 mile race, with a timing mat at the 0.5 marker to measure the final 5K, that would be ideal! In workouts I always feel like that first half mile is so hard, and then I settled in.
On the positive side, any time you negative split a 5K is a good day, even if the last mile is downhill! I had a ton of fun out there and I'm proud that I showed up and worked hard. Plus, I have things I can work on for the next 5K! 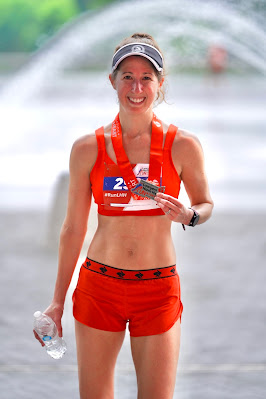