Exactly 14 years ago, in late June of 2008, I met Michael Wardian for the first time. He was attempting to break the world record for the fastest treadmill marathon and I was there to support him. My friend Michael Hayden had introduced me to Mike and we went to the event together. Details about that day are in this blog post. I was creating videos long before Instagram Reels were even invented!

Fast forward to last weekend, I once again found myself supporting Mike Wardian. (There were definitely some chess tournaments in between these two events!)

Michael Wardian is currently running across the United States. He started in San Francisco on May 1st, and by last weekend, he had made it all the way to West Virginia. He averages 50+ miles each day and is raising money for World Vision, which provides clean water to those who need it.  At the time if this posting he has raised about $73,000 on a goal of $1000,000.

Greg and I decided to drive out to West Virginia on Sunday and run with him. We could have waited until he was closer, but we figured he would have plenty of support near home. We wanted to run with him when he might otherwise be alone.

The day before, we prepared everything we needed, making sure we didn't arrive empty handed. We had a
list of Mike's favorite things, which included ice packs, cold wet towels, coconut water, dill pickles, and fresh fruit. We even bought a new cooler for the occasion!

We left our house at around 6:00am, knowing that it would take us around 2 hours to meet up with him. Mike has run the majority of his miles on Rte. 50, and that is the road he took through WV. As we got closer, we noticed that there was hardly any shoulder space to run on. And the curves were tight with cars driving quickly around them. Yikes- this did not seem like a safe thing to be doing! 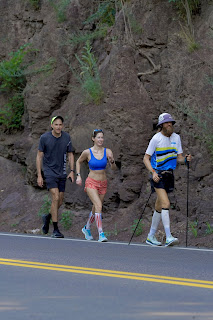 We found Mike running with a friend in Romney, WV. I hopped out of the car and joined them. The plan was for Greg to drive eastbound, stopping every mile or so to take photos/videos, and then we'd switch. I was not surprised to find that the route was quite hilly. West Virginia is known for its hills. Thankfully, Mike walked up the steep hills, and ran the downhills. Overall we averaged a pace of around 12:00.

It was so amazing to chat with Mike and hear all about his journey. I had so many questions for him:

Many of my other questions had been answered by following his journey on social media and reading his daily posts.
As for the run itself, it wasn't the safest thing I have ever done, but thankfully there were no close calls. There were three of us during the most dicy parts and Mike had two poles he was carrying that helped draw attention to us. There was a police officer who had seen us and decide he would help by flashing his lights and getting the traffic to drive slowly around the curves. He had no idea what we were doing. We told him several times that Mike was running across the country. It took a few times to finally register, and when it did - his eyes popped out of his sockets!
When Mike stopped at his RV, we gave him the strawberries, pickles, etc. He says he takes in about 5,000-7,000 calories a day.  Our food wasn't very caloric, but at least it was refreshing. It had started to get warm and many sections of the road had no shade.
At the RV, Greg and I decided to switch. He would run and I would drive. I had run a total of 5.2 miles with Mike, with an elevation gain of 761 feet. Which is about the same amount of climbing in the entire Boston Marathon. So 5.2 miles in the sun on hills was plenty for me. My goal this summer is to take it easy and stay healthy. 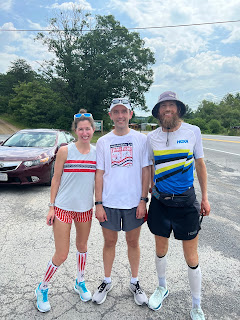 Greg ran with him and I drove, stopping the car every two miles to take videos and cheer them on. I had brought my crossword puzzle book, thinking there would be no internet out there and that I would be waiting for a long time, but there was actually internet, and I didn't spend long waiting.
Mike's other friend stopped running with him so it was just Mike and Greg. Mike said most people come out in the mornings when it's cool and few people want to do the afternoon shift. After they had run for 10 miles, Greg called it a day. While I was waiting for them, I figured out that we were only 12 miles away from Virginia. Mike would be sooooo happy to get to his home state! I later saw his photos of the Welcome to Virginia sign and he was a little teary eyed!
Mike reached Winchester that evening and the next day, loads of people came out to run with him. He was interviewed by our local morning show, Elliot in the Morning, which I thought was so cool. I am a longtime listener to that radio show.
When I went to upload my run to my training log, I realized that I had run my 30,000th mile with Mike! I started my training log in 2008, and getting to 30,000 logged miles felt pretty cool.
It was so much fun to be a part of his epic journey! I'll end with one final plug for his charity, World Vision, which works to provide clean, safe water for communities worldwide. 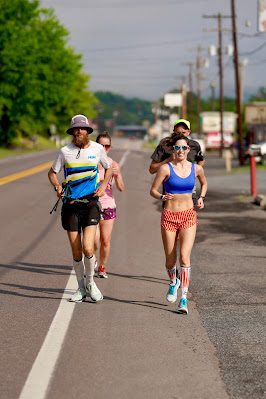