Please enjoy this guest blog post written by my husband Greg!
Choosing Vermont City
I ran the Rehoboth Beach Marathon in December. At dinner that same night, Elizabeth was already asking which one I wanted to run in the spring. She and I are different in that way – I wanted to continue reveling in my recent accomplishment, whereas she wanted to know, ‘what’s next?’. More than once we’ve had similar conversations where my answer is, ‘I’m not ready to think about that yet’. 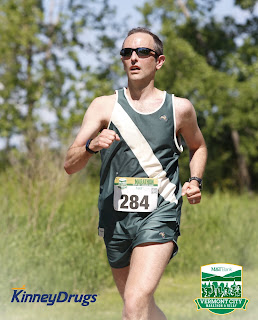 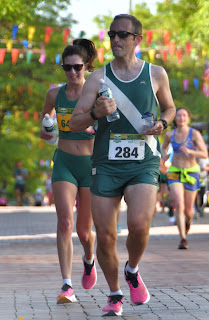 Miles 6-8
Mile 6 was still very crowded but quite nice because it was on a path directly next to the lake. The scenery was serene and there was a beautiful cool breeze coming off the water. It was the most enjoyable section of the entire race.
Mile 7 was the least enjoyable of the race; It included a ~200 foot climb up the pedestrian Church street area I mentioned earlier. The surface was brick, so it was also necessary to watch your footing. Mile 8 started with a short and steep climb and ended with a long gradual climb. I knew the next time I’d be enjoying this hilly section was miles 20-21.
I had pulled ahead of Elizabeth on the hills. Partly because I’m stronger up hills, but also because she steps gingerly when the footing is questionable. She caught up though and we carried on together.
Mile 6 – 7:34
Mile 7 – 8:02
Mile 8 – 7:41
Miles 9 – 10 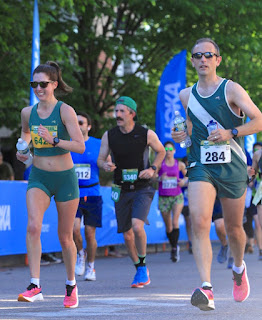 These miles took us through an out-and-back detour through a residential neighborhood. The crowd support in this section was fun – people had sprinklers and hoses they’d spray you with if you seemed so inclined. There was an impressive 80’s-style hair-rock band playing in one front yard. The singer had on quite the outfit with a wig and makeup. I didn’t look closely enough to see if they were trying to impersonate KISS, or if it was just similar. Either way, it was fun.
This section was made challenging by the turns and potholes. I noticed that I had pulled ahead of Elizabeth again, but this time she was on pace, and I was going too fast. I welcomed the throttling – there is no surer way to ruin a marathon than to go too fast too early.
Mile 9 – 7:31
Mile 10 – 7:43

Miles 11-13
Early during mile 11 I started pulling ahead of Elizabeth again. This time she told me she was falling behind and that I should go ahead. She told me the prescribed paces of 7:20, 7:30, 7:15. With that info, I was off. It was exciting to be responsible for my own pacing. The paces were fast too, which meant I’d be running downhill. These would also be the final three miles of the entire race once I had come around the loop again, so it was of particular interest to envision that. These miles were also on a different section of the path by the lake. This time we were higher up, so the view was more majestic.
With all this excitement and newfound purpose in mind, I overdid it by a little bit, but not too much. It felt good and I was ‘easily’ able to crank out some fast paces.
Mile 11 – 7:16
Mile 12 – 7:17
Mile 13 – 7:13

One more time around
I hit the half-way point at 1:40:18 with a Garmin distance of 13.2 miles. 0.1 was more than I had expected to run extra, but time-wise, I was spot-on. My pacing strategy was to average 7:25 for the second half. I figured I could adjust the mile-to-mile pace around that based on what I remembered from the first half. I knew the first couple miles were slower. I knew there would be the glory mile by the lake followed by the hilly section, which I’d endure until the start of mile 22. Then I knew it was time to run the neighborhood hose and rock band gauntlet. And finally, I had those wonderful fast finish miles where I’d give it everything I had.
Having this segmented picture in mind really helped me with my mental game. 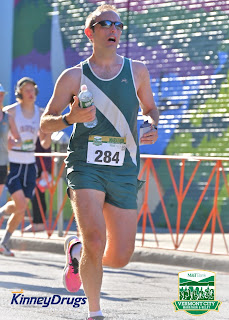 Segment 1 – the slower miles
The course wasn't crowded this time. I’m glad I knew they had a challenging hill profile or I may have gotten discouraged with how difficult this section was. I felt my legs starting to ache and thought it was too early for that. The hills that I had such power on during the first half were much harder this time around.
Somewhere around mile 17 or 18 I passed my friend Chad. I was sad to see him because he had a 9-minute head start. So, I knew it meant he was having a hard time. I encouraged him to run with me, but he wasn’t having it.
Mile 14 – 7:29
Mile 15 – 7:32
Mile 16 – 7:32
Mile 17 – 7:25
Mile 18 – 7:24
Segment 2 – the lake and the hills
The lake mile lived up to my expectation. It was incredible. The hills however had gotten bigger since I last left them. The sun was stronger. The day was warmer. Everything was harder, but I had two things going for me – first, I knew to expect that it’d be hard, so, no big deal. Second, I knew Elizabeth would be waiting for me at the top. We planned that as the ideal spot where she could come spectate as a way to help me get through it. It worked well. I was very happy to see her and it gave me a good boost.
Mile 19 – 7:15
Mile 20 – 8:05
Mile 21 – 7:36
Segment 3 – the neighborhood
Generally marathon miles 22 and 23 are among the hardest for me, mentally. They’re quite far, but not far enough as to where I believe myself when I try thinking that I’m ‘almost done’. If the race is going well, they’re like the boring part of the movie where it’s hard not to just turn it off. If the race is going poorly, it feels like being stranded in the middle of the desert or on the moon. Nothing is close enough and everything is too far away and there’s no hope in sight.
However, this time they were nothing like that. This time they were just that one last little thing to do before the fun begins. This was a first for me. If Yogi Berra ran marathons, he’d agree it’s 90% mental and the other half is physical.
Mile 22 – 7:35
Mile 23 – 7:17
Segment 4 – the finish 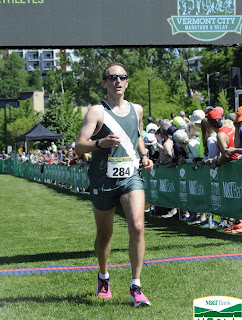 I had been looking forward to these miles since mile 11. I was now living my prior vision for myself. It felt great.
I knew I was in really good shape because I was able to calculate that I would PR if I ran better than xyz pace based on the time on my watch and the distance left to go. Being able to do such calculations so late in a race, gave me even more confidence.
As I confirmed the pace on my watch was better than I needed, I had a positive feedback loop going on mentally and it carried me through to the finish. I gave it all I had for the final ~1.5 miles.
Mile 24 – 7:17
Mile 25 – 7:20
Mile 26 – 7:04
Final 0.41 – 6:57
Final time – 3:18:15
This is a PR by 1:36.
Post Race
Chad stayed strong and finished the race. He was beat up some, but felt well enough to join us for a celebratory dinner that night. It was great to spend time with them after not seeing them in person since the start of the pandemic.
Also, I really appreciated Maria and the kids cheering me on at four different points throughout the race. It was so much fun seeing them on the course. On Monday we had lunch with my childhood friend Jim, his wife Rae, and their son, Andy. We haven’t seen them since our wedding, and we’d never met Andy. I really enjoyed our time together.
Reflection
I accomplished everything I set out to with this race. Both the journey and the destination provided life-enriching experiences which I treasure and am proud of accomplishing. After all, that’s the whole point, isn’t it? It’s got me asking myself, ‘what’s next?’. 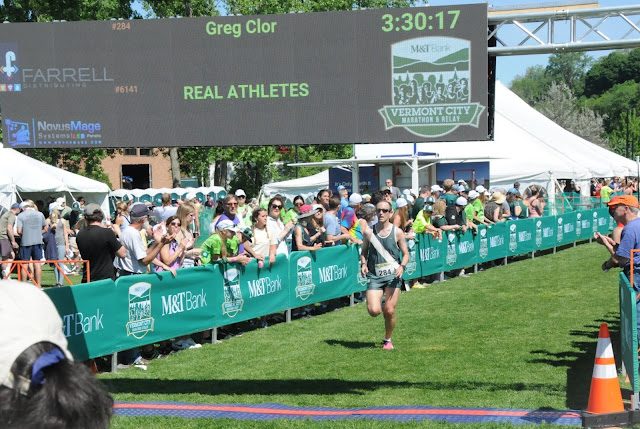