Despite most races being canceled, I had a decent running life in 2020. In fact, I've logged 2,855 miles this year, which is 160 more than last year, making it my highest mileage year ever. And there are still four more days left to add some mileage! Below is a graph of my mileage starting in 2012. I'm not sure if I will ever have a year of higher mileage than this year, so this could be a lifetime PR. Part of the reason I was able to log all of these miles was lack of recovery from live marathons, lack of illness, and lack of injury. 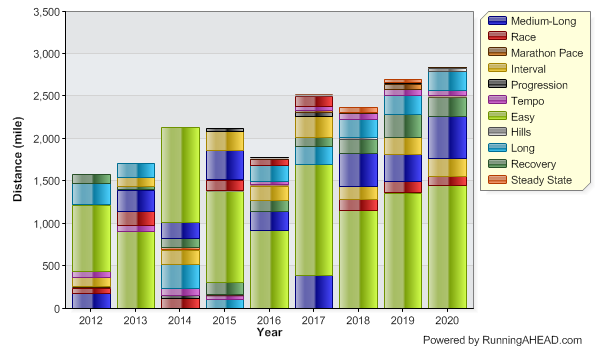 Longest run streak
Along with my highest mileage year ever came my longest streak ever: 181 days. From January 14 to July 12 I ran every day, totaling 1,461 miles! The streak started after taking time off from Posterior Tibialis 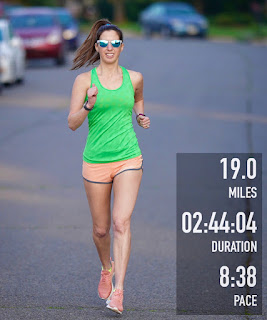 Tendonitis in January, and ended when I felt run down from the heat and humidity in mid July. I will likely never again have such a long streak because I would typically not go for 6 months without running and recovering from a marathon, necessitating time off.

If you decide to start a streak, the most important thing to remember is that you control when the streak ends and not vice versa. In other words, the streak will have to end at some point and you want to have it end because you choose to end it, and not because you are forced to end it due to injury or illness.

I had another long streak between July 17 and November 6: 112 days. This streak ended when I took a rest day two days prior to the Harrisburg marathon. The combination of these two streaks (181 days and 112 days) helped me reach that high yearly mileage total.

Highest mileage week
My coach challenged me to run a 90-mile week in April. This included the virtual Boston Marathon on April 20, which I ran at my easy pace. I was able to log 7 miles the next day and continue on with about 10 miles a day for the rest of it, including a 19-miler.

Because I have been working from home since March, I have had more time to devote to running and recovering from my runs. Not having a commute and not having to do my makeup has been a big time saver. I'll admit that I am now spoiled and once I return to the office, it will take me a while to get back into that rigid schedule.

Virtual races
I'm not a huge fan of virtual races, but when real races simply don't exist, virtual races are better than nothing. I also thought it was important to support our local running store by registering for a few of these.

I also was a virtual finisher of the Lucky Leprechaun 5K (tempo run) and the Run with Stride virtual 5K (tempo run). The virtual races were an interesting experiment, but I hope to never run one again.
New PRs
Do you count a virtual PR as a PR? I think so! After all, the "P" stands for personal. Also, if the answer to that question is "no," then what motivation do you have when running a virtual race? If you don't consider the result to be legit, it will be hard to motivate yourself to push hard. Repeating "it matters, it matters, it matters" over and over again helped me get through all of my virtual races. That said, I make a mental note of whether or not my PR was run in a live race or a virtual race. In my Race History, I have all the virtual races in italics.
That's a good amount of PRs in a year where most races were canceled and I'm 42 years old, either at my peak or approaching my peak.
Real, live races
I did manage to run two live half marathons this year and a live full marathon. The first live half marathon was before all of this started, the first weekend of March. The other was in October in Hanover, PA. That one didn't go so well because of the hill profile, but it was still nice to be in a live race setting.
I ran the live Harrisburg Marathon in November. Just two weeks later, the state introduced new restrictions which would have made the race a no-go. I am so relieved I had the opportunity to run it, even though digestive issues made the race a slow slog.
An of course, setting a PR at the live Christmas Caper 10K earlier this month was a huge mental boost. Especially at a distance that I had struggled with since 2017.
Predictions for 2021
Of course we all expected things would be back to normal in 2021, right? Not happening. There's no clearly defined goal post for a "return to normalcy" as we know it, which to me means that things will not return to normal within the next year, two years, three years, or maybe ever. I know that sounds pessimistic, but once you set a precedent of closing businesses, canceling events, closing schools for the sake of public safety, then it suddenly becomes acceptable to close/cancel them again.
I don't think large marathons like Boston, New York, or Chicago will occur in 2021. If they return in 2022, I imagine they will be different from how we know them.
Thinking about the timeline of things, here is what we all thought would get us back to normal:
While my outlook for things in general may seem bleak (and I hope I'm wrong), I mainly just focus on what I can control and I do believe that I can have an active running and racing life in 2021, just like I did in 2020. It will mean spending more time doing research, having less flexibility over when I race, running on courses that might not be ideal (gravel, etc), and having a plan B, C, D, E and F.
We do hope to go to Africa for our postponed safari in August. Right now I am 50/50 on whether or not that will happen.
Final Thoughts
This year has been stressful for all of us, but I was fortunate to have a stable job that allowed me to work from home, and so was Greg. I didn't get sick at all this year -- no mono -- which is always a win for me. Thankfully I don't have children to worry about and never have we been more confident in our decision to not have children. Running has helped me keep my sanity and if it weren't for my running I don't think I would be in as good of a spot mentally. It has provided me structure, routine, purpose, and excitement.
Happy new year to all my blog readers.
at 12:19 PM