Yesterday I ran the Virtual Indianapolis Monumental Mile on the track with Greg. I had been training to run the mile distance for about 4 weeks.

Time Trial #1
On May 25th, I ran my first ever timed mile. I had absolutely no idea what I was in for. I've read many 1-mile race reports over the past few years and I even spectated a 1-mile track race about eight years ago. However, I never had the desire to race this distance. In the spirit of taking on new challenges during the Covid era, I decided now would be the time. 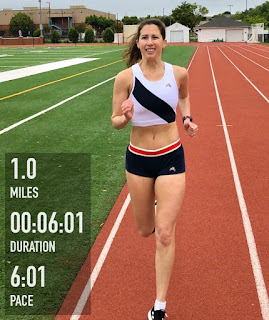 We decided that Greg would go first and I would time him using my phone's timer. I would collect his lap data and cheer him on. Then it would be my turn. He would take photos and videos and cheer me on. You could make the case that we would have been faster if we ran at the same time, but I wanted to "run my own race" and not be distracted by what he was doing.

My biggest fear was totally blowing up and running far slower than my capability. So I decided to start on the slower side and finish with a hard sprint.  My goal for the first time trial was simply to get a baseline for future time trials, but I decided I would shoot for 6:00.  My splits for each 400m lap were:

Time Trial #2
Our second time trial took place one week later on June 1. I should note that the weather for both the first and the second time trials was unseasonably cool. Mid 50s with low humidity.

Now that I had some practice under my belt, I decided I would try to go out more aggressively and run sub 6:00. I also knew that my mental game needed to be stronger. During the first time trial I kept having visions of stopping and not finishing the whole thing. For time trial #2, I vowed that I would stay positive the entire time and remind myself to push as hard as possible while staying relaxed.

My time was 5:56.0.  Over 5 seconds faster! Once again, I felt like I was flying during that last lap and I wished I had gone out faster. Greg ran 5:40, so we both shaved nearly six seconds off of our first attempt.

Time Trial #3
Once again, we waited one week and ran another time trial. It just so happened that Mondays offered the unseasonably cooler weather. It was in the upper 50s and sunny, but the humidity was low. I promised myself I would go out even faster and I would push, push, push all the way through. With two time trials behind me, I was much more confident in my abilities.

My time was 5:52.5, a PR by 3.5 seconds! I was so thrilled with this. And for the first time, I felt like I really gave the run everything I had in me. I was totally and completely spent by the end. After the first two time trials, I felt like I still had more to give. Greg had similar gains, running 5:37.

The Race
For the virtual race, we were allowed to run on any date between June 22 and June 30, so the race is still going on. We picked yesterday, which had the coolest weather. It was 62 degrees, compared to all the other days that were around 70. It was a humid 62, though, so it was definitely not as nice as any of the previous 3 attempts. I had no idea how much of a factor the weather would be for a race that lasted less than 6 minutes. I mean, how much can the humidity really get you in such a short time span?

Turns out, both Greg and I felt flat. I didn't feel like I had the power that I had during my previous attempts. My goal was to break 5:50 and run the first lap in 1:28. I think it was partially the weather but also partially that I just didn't feel great. Training in the heat has a cumulative effect so even if the actual race has good weather, if you've been training in crappy weather in the week leading up to the race, you likely won't feel your best.

Ironically, this is what happened at the Indy Monumental Marathon in 2017. I trained really hard during an unseasonably warm autumn. The race weather, however, was ideal. And yet I totally crashed and had a horrible race. My splits were:

My time was 5:58.0. When I saw my split for lap 3 I knew I needed to book it just to break six minutes! It seems like I am consistently able to run 1:26 in the last lap, but I can't seem to get myself to push harder earlier. I don't know if that's lack of confidence or that my legs need to warm up more. I was really, really hurting by the end and it took me a while to feel recovered after I finished. I felt like I pushed harder in this virtual race than the other time trials, and that is supported by the heart rate data below.

Before these time trials, I do drills and a few 100m strides, so I feel loose and ready to go.

In any event, I was happy that I ran sub-6:00 but disappointed that I didn't reach my goal of sub 5:50. And just like in the time trials, Greg was slower than his PR, too. He ran a 5:42. Both of us were faster than time trial #1, but slower than the other two trials. It was just not the day to PR.

Because I love charts:


As for my training, my has been relatively low, as it tends to be in the summer. I plan to take the month of July very easy and then start adding more volume in August.
at 5:06 PM