On Friday morning, I ran the Mother's Day Virtual 4-Miler, put on by Potomac River Running (=PR=). This was the first race I registered for as a virtual race, as opposed to registering for a real race and then having it turn into a virtual race.

=PR= sent out medals, bib number and race shirts about a week in advance of the race. We were told that we could run the race at any time on Friday, Saturday, or Sunday. We could run it anywhere we chose, except for the official race course that had been used in previous years.

Initially, I thought I would run the race on Saturday. That would get it out of the way early and then I could still do a long run on Sunday. But as the forecast solidified it looked like it would be windy on Saturday, with Friday and Sunday being better options. Ultimately I went with Friday so that I could run my long run on Saturday, and not have to wait all weekend to do the race. 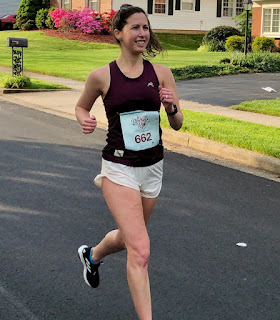 I have to admit, I am getting spoiled with virtual races and the option to choose the best weather day on a course I map out! I guess those advantages make up for the disadvantage of not having competition and a real finish line to run through.

In general, my thoughts on virtual racing are that they are the best option we have right now for racing, so we might as well do them. It's a great way to support local race organizers and increase the chances that they will still be in business once races are allowed again. The racing industry is getting hit HARD right now, so I will try to support race organizers as much as possible.

I would never choose a virtual race over a real race, but in the absence of real races, I would rather go virtual than not have any races at all. I enjoy pushing myself, having something to work towards, and the satisfaction of tackling a challenge. I'm honing my mental skills of pushing hard so that when real races come back, I will be in shape both mentally and physically.

Do virtual races count as PRs? Remember, the "P" in "PR" stands for Personal. So yes, if I run the distance faster than I ever have before, I am counting it as a PR. Plus, virtual racing is arguably more challenging than real racing because you don't have the race day adrenaline and the other runners to feed off of.

Before the Race
Greg and I woke up at 5:45 with the goal of leaving our house at 6:30. I wanted to start the race at 7:00 before it got too warm. I had half a serving of Generation UCAN Performance Energy, plus a Maurten gel with caffeine. The purpose of the UCAN was to ensure I had long-lasting energy, and the purpose of the gel was to get the caffeine.

We drove about two miles to the neighborhood where we would run the race. I had mapped out the course earlier in the week. The actual Mother's Day course starts up a big hill. So I designed a course
that started with a hill. From there, we would run down the hill and then it would be mostly flat to the end. The actual course continues to be very hilly until the end, so our course was definitely easier than the real thing.

My PR was 26:57, so that was the time to beat. I should also note that there used to be another popular 4-mile race that was held in the summer in the evenings. My PR for that course is 27:32. It's a flatter and much easier course than Mother's Day, but the 80+ degree weather makes it far more challenging overall. The race was discontinued last year and I don't think it will come back.

My goal was a sub-6:44 pace, which would be a PR. However, I really wanted to run an average pace of 6:36, which was the same pace as my 5K time trial a few weeks ago. I really feel like I could have pushed that race harder, so running a 4-mile race at the same pace as a recent 5K would be a nice win.

We warmed up for two miles. The weather was ideal. 48 degrees, mostly cloudy, and no wind. I give this a 10/10 on my weather scale, especially for May! Typically it needs to be in the low 40's to get a perfect weather score but for a short race like this, and with there being no wind, it was absolutely perfect.

Mile 1: 6:52
My plan was to run this mile conservatively because of the big hill and then go all out for the other three. When we started, Greg shot ahead as he tends to do in these races, and I had no expectation of catching him. He took the hill faster than me and was leading by about 15 seconds as we finished the first mile.

Mile 2: 6:36
Okay, now it was time to rally. I kept repeating to myself "It matters. It counts" as a way to push to my max and get the best out of myself. I don't think I gave it my all during the 5K time trial so this was my chance to prove to myself that I could push really hard in a virtual race setting.

Mile 3: 6:28
After hitting the halfway point and realizing that I had less than 15 minutes to go, I had the confidence to crank it up a notch. Often in races, I ease up in the second to last mile because it really hurts and I feel like I need to save some energy for the last mile. This time, I had the confidence to push really hard, knowing that I would still have energy left for the final mile.

I also noticed that Greg wasn't getting any father ahead of me. The gap was staying the same and it seemed like we were running the same pace. This was later confirmed by our splits. And I was thrilled to see that my 3rd mile was faster than his by a few seconds! One of my goals during this race was to push hard in the middle miles and my 6:28 split shows that I did just that.

Mile 4: 6:26
I flew during the last mile. I was hurting from the effort level but feeling so strong at the same time. I wish it always felt like this during the last mile of races. It wasn't that I had "saved" it all for the end either. If there had been a real finish line with a crowd, I probably could have run a little faster but since there was no finish line and I was waiting for my Garmin to beep, I didn't have a huge kick. 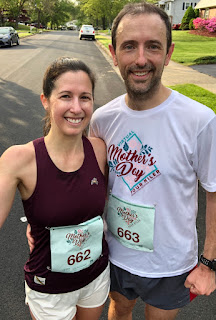 We cooled down for a little over a mile and then drove back home, where we began our work day. I didn't love having to go to work after a race; I would have rather basked in the satisfaction of my new PR. But it was worth it to race in non-windy weather.

As for the results, runners have until the end of the day today to submit their results, but as of 12:30pm on Sunday, I am in 3rd place out of 149 women. The results don't have age groups; just male and female divisions. I should mention that the 1st place female ran in the Olympic trials, so the competition here is pretty serious! Her time was 20:05 (average pace of 5:01).

Greg is currently the 4th male out of 39. I guess since this is a Mother's Day race, there are far more women participants!

Final Thoughts and Key Takeaways
I achieved all of my goals in this race:

I think that of all my virtual races, this is the one I am most proud of. Except for my "virtual" Boston marathon, which was not race effort, but was still extremely challenging due to the hills and the humidity.

Looking Ahead
The summer is usually my "off season" for running because I can get really sick if I push hard in the heat and humidity. I need to be extra mindful of that with the coronavirus going around. So far, though, it's been unseasonably cool which has extended my hard training.

My next big challenge will be the mile. I have never raced the mile and I often get asked "what's your fastest mile?" To date, my fastest mile is 6:11. That was a downhill mile at the end of a Turkey Trot 5K with a tailwind. If I tried to run a mile right now I think I would be somewhere around 6:00. I would probably struggle to get under that. I think with some mile-specific training I could push it to 5:50 or 5:45.

I've also started a strength training program with a strength training coach. This happens virtually over Zoom. We did an assessment about a month ago in which she identified the areas where I could gain running efficiency if I had more strength and stability. Based on the assessment, she wrote a program for me and we have sessions every week. I've had two of these sessions so far and I love them. Having a coach provides accountability because historically I have never been able to keep up with a strength training regime for more than 6-8 weeks before quitting. Also, now that I know I'm doing exercises that will help me be a faster runner, I'm more motivated.

When do I think races will come back? There is an increasing amount of research and evidence showing that the virus does not spread as easily outdoors as it does indoors. Also, we haven't seen major outbreaks from the LA Marathon and other large races that occurred that same weekend-- when the virus was clearly in the US but we hadn't yet started social distancing.

We've also flattened the curve to the extent that the healthcare system is not overwhelmed with patients. Does that mean races will come back? No. From everything I am hearing, the overwhelming objective is no longer to flatten the curve but to "prevent the spread" of the virus. And if that's the case, we will need to wait for a cure or a vaccine.

Back when it was "flatten the curve" I was optimistic about races coming back in the summer. Now that it's "stop the spread" I don't see races happening until 2021. At least not races with more than 1000 people. But I love running and racing so I will continue to do whatever I can to keep it in my life.