This morning I ran the real, live Christmas Caper 10K in Washington, DC. This was the same course as my 5K from November, only doubled. It's a no-frills race series. No chip timing, no shirt. Just a race on a fast course with fast runners.

I had run this race before, 12 years ago in 2008! I had to consult my race history in my blog to find the report and sure enough, I have a report from the 2008 race. In 2008, I ran 10 miles with hills two days before the race, 5 miles the day before the race, and then stayed up past midnight the night before the race at a holiday party. And then I was upset that I didn't PR. Hahaha! Back then I thought I was invincible and should be able to PR in any circumstances. My time was a "disappointing" 49:36. And then I ran 17 miles the following day. (Insert facepalm emoji here).

Race Approach
This year, my goal was to PR. The conditions were perfect (I give them a 10/10 on my race weather scale) and I was in outstanding shape. My 10K PR was my longest standing PR from 2017 at 41:51. I really had no idea how I ran that fast because that course was insanely hilly. And ever since that 2017 race I thought, "If I get good weather and an easier course, a PR should be no problem".  I had run six 10k races since setting that 41:51 PR, and none of the six were faster. Four of them were humid, one of them was coming off an injury, and one was on a track.

Even if I hadn't been in the best shape ever, a flat course with perfect conditions meant a shot at a PR. I told my coach I wanted to PR and his response was "yeah, let's just do it" as if it was no problem! I liked having the mindset that it was really a matter of getting it done. I had the fitness and the conditions, all I needed to do was to execute.

Fueling Strategy
If you have been following my blog you know that I have been experimenting with different fueling strategies since my digestive nightmare at the Harrisburg Marathon in November. I am using Maurten products, and for a 10k, their website recommended having their Drink Mix 160 three hours prior to a 10k, and then a caffeinated gel 30 minutes before race start.

I had only tried the Drink Mix once before on a training run, so I decided that instead of drinking the entire serving (500ml) I would drink about half. And instead of my normal English Muffin with peanut butter, I would have half an English muffin with Almond butter. To summarize: 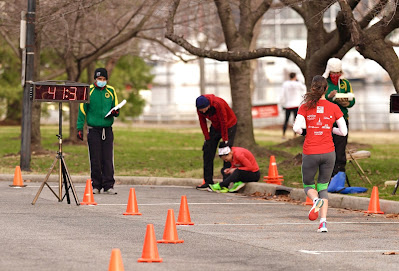 Based on this photo, it looks like my official time should have been 41:32. Or at least the 41:33 that my Garmin logged. But it ended up being 41:35 officially. Based on this photo, I am going to claim 41:33. After all, Personal Records are 'Personal' and there's no way this is a 41:35. I know I am splitting hairs but when you work your butt off for every little second, they all matter.
Other final thoughts: 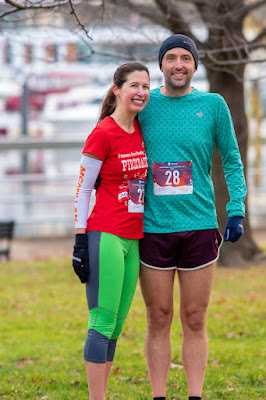