As I mentioned in a previous post, I have been struggling with Posterior Tibialis Tendonitis. This injury was the result of wearing the Nike Vaporfly Next% during the California International Marathon in December. I did not have the issue at the start line, but my arch was killing me immediately following the race.

As a result, I only ran 159 miles in January, where I planned to run around 260-270. Most of these miles were run at any easy pace. I did spend a fair amount of time pool running and swimming, but 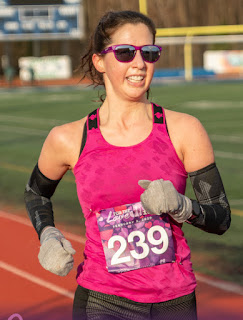 there is no true substitute for actual speed work. I have been religious about doing my physical therapy exercises twice per day and as a result, my foot is feeling a lot better.

I didn't want to miss out on the For The Love of It 10K that was on my schedule. My coach and my physical therapist told me I could go ahead and run it. It would be a good test of my fitness, although possibly a humbling experience.

Background
This 10K course is hilly and challenging. It's one of the most challenging 10K courses in the local area, and yet it's my PR course from 2017. Back in 2017, I was just four weeks out from the Myrtle Beach Marathon and I was in excellent shape. I ran a surprisingly fast 41:51, which I could not believe at the time. I ran three 10K races last year, all on faster courses when I was in peak condition, and still failed to beat that time. None of those courses had great weather, though. The trick is to get good weather, a fast course, and to be in good shape all at the same time. That's when PRs happen.

We had lovely weather this morning but I was not in my best shape. It was 35 degrees with winds of around 8 mph and party sunny. Before the foot injury, my goal was to PR and I believed I could crush my 2017 time. My revised goal was simply to push hard throughout the race and be proud of my effort. I hoped to break 43:00.

Regarding footwear. I really wanted to wear the pink Vaporfly Next% because they were pink and it was a Valentine's themed race. But of course, this is how I got my tendonitis so those shoes were out of the question. I wondered if I should wear my bulky stability shoes to ensure my foot wouldn't hurt, but my physical therapist said that firm, low-cushioned shoes were good. Thus, I turned to my trusty adidas adizero adios. A lightweight racing shoe with a firm ride and a touch of bounce.

Before the Race
Everything went smoothly before the race. Logistics were extremely easy, as the parking lot was just steps away from the school where we got our bibs, and the start line was right there too. This race has a history of being very cold, so it's helpful to have a school at the start and finish line. When I ran it in 2017 it was in the low 20s. Last year (when I did not run it) it was around 10 degrees and there was ice on the ground.

Anyway, Greg and I arrived at 7:20, got our bibs, pinned them on, and I took a small swig of Generation UCAN before starting the warm up. We only had time to run 1.6 miles for the warm up because we also had to use the bathrooms. 15 minutes before race start, I took a caffeinated Maurten gel for some extra pep.

We found Hannah, did a bit more warming up with her and then arrived at the start line with just two minutes to spare. 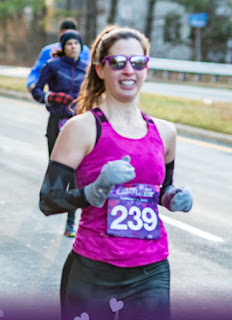 As the race started, I noticed that the pace felt controlled and smooth, and more like half marathon effort. Even though the first two miles were net uphill, I felt strong and I didn't feel like I was straining too much. I reached the first mile in 6:58 and I thought that would set me up well for the rest of the race. I told myself not to compare my splits to my 2017 splits, but since I knew what they were, it was hard not to do that. So as of mile 1, I was 10 seconds behind.

Mile 2 was also mostly uphill and it was hard. I focused on my form, engaging my glutes, using my arms, and staying mentally engaged. I didn't look at my watch but I felt really good. When it finally beeped, I saw that I had run a 7:13 mile, which I simply accepted as my fitness level. I was running hard and doing my best, so I didn't get discouraged by my pace.

Miles 3-4
These miles are the fastest of the race. I was able to pass a woman during the third mile, but a different woman passed me during the fourth mile. I had no idea how many women were ahead of me but I knew it was a competitive field for a local race.

Back in 2017, these miles were in the low 6:30s, so I was expecting a full downhill ride. Nope! Even though they were NET downhill, they had their fair share of ups!

During this portion of the race things got really tough and I started to wonder if I would be able to maintain this effort. I was giving so much of myself and I didn't know if it was sustainable. I refused to back off, though, because I knew that in that moment, I could do it, and I would do it as long as I could. These miles clocked in at 6:47 and 6:45.

Miles 5-Finish
I was mentally prepared for mile 5, which was my slowest mile back in 2017. I know-- I kept thinking about 2017! And I wasn's supposed to be doing that. But that was freakishly perfect execution and I was inspired by my former self! The hill was actually not as painful as I remembered it to be. I think I am generally a stronger hill runner now than I was back then, but it still created a slow down in my pace. 7:12. Okay, at least it wasn't slower than mile 2. This meant that I was maintaining my pace and not falling apart, as I feared I might.

The fact that I was definitely still holding on to both my effort and pace was a huge pick-me-up. I guess if you set the bar low and think you might bonk later in the race when it's mile 3, you get really excited to not be bonking at mile 5! I was exceeding expectations!

The final mile was painful. I gave it everything I had and did not back off. It started uphill but then had a nice downhill. And the last 300 meters were on the high school track. Oh the joy of a flat surface after constant rolling hills! I ran mile 6 in 7:04 and the final 0.26 (by my Garmin) at a pace of 6:36. Nobody was around me as I finished so I made sure to smile big for the photographer and really
take in that moment. There's nothing like that finish line feeling and I finished strong, knowing that I had given this race everything I had.

After the Race
My lungs were on fire for about 10 minutes after the race. I was so beat that I sat down on the field. It was a satisfying feeling, though! I reunited with Greg and Hannah. Greg ran 41:03 which was about 10 seconds slower than his time from 2017. No PR cake tonight, unfortunately. I also got to meet someone who I had been following on Strava for years, Bonnie. She introduced herself to me and it felt like we already knew each other! We all cheered Lisa in, and then we cooled down for 1.3 miles.

Final Thoughts and Key Takeaways
My official time was 43:43, which is far off from my sub-43:00 hope and very far off from my 41:51 course PR. But I wasn't as discouraged about this as I thought I might be. If someone had told me before the race that I would run 43:43, I would have been bummed out. But the fact that I held it together so well and didn't fade makes me believe my endurance is somewhat intact.

I was first place in my age group (40-44) out of 32 runners. I was the 13th overall female, which shows you just how competitive this race was for a local 10K. I am almost always one of the top 10 women in this race series by Potomac River Running but not today. I'm 41 now, and it won't be long before some fast ladies start entering my division, so I need to take advantage of this while I can!

Based on how the race felt, I think my speed has suffered from the lack of workouts but my endurance not as much. I would have expected it to be the other way around because my mileage was low, but my deep water running workouts were really intense. I believed I was maintaining my VO2 max, but letting my endurance slip.

I think that regular speed work is important for getting the legs to turnover quickly. I had run a 5K tempo on Monday at an average pace of 6:54 and I felt like I could have maintained that for longer, but not necessarily have gone any faster. On Wednesday, I had done some 1-minute and 2-minute Fartleks and those were a big strain--much more than the tempo run. So I did have some indicators going into the race that my endurance was strong but my speed was lacking.

The good news is that I can get my speed back relatively quickly. 3-4 weeks of work should do the trick and today was an excellent workout.

My foot held up really well! There were times when I could feel there was something there, but it never "hurt". Toward the end of the cool down it started to get a bit unhappy, so we stopped running after 1.3 miles. That was a sufficient cool down anyway. I logged 9.2 miles for the day, which is more mileage than I had logged since January 6. A good step forward.

I am happy with my pacing, execution and endurance. I just wish I could have run faster. Next up: The One City Half Marathon on March 1st. My half marathon PR pace from November is 6:55 (faster than today's race) so if I can come anywhere close to that, it will be good progress. Thank goodness February has an extra training day this year. I'll need it!