Racing a 10K During Marathon Training

I'm in the height of my training cycle for the Myrtle Beach Marathon, which means I've logged 70+ mile weeks for the past several weeks. The past seven days were no exception. From last Saturday through yesterday, I logged 71.3 miles. 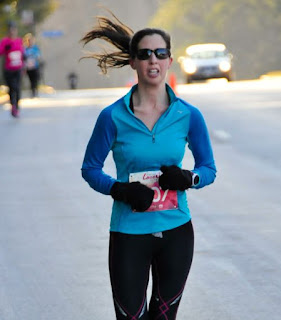 Because the Disney World Half Marathon was cancelled, I wanted to run another tune-up race prior to the marathon on March 4th. But because it's February in the Washington DC metro area, there were no half marathons within a reasonable driving distance. Given that I had already taken time off work for Disney, I didn't want to take any more time off for a race that required a flight. So I had to settle for a local 10K. But that's not a bad thing! This 10K is part of the =PR= trophy series, giving me points that accumulate throughout the year. Plus, many of my friends were running it.

My coach didn't want me to sacrifice my mileage volume for this race, and he also wanted me to practice running hard on tired legs. So he intentionally gave me zero taper. Actually, I refer to it as the anti-taper.

The Anti-Taper
The anti-taper is running 71+ miles in the week leading up to the race, including a set of 10 x 800m on the track, a 21-miler, and a half marathon distance two days prior. Here's how it went down:

Thursday: 13.1 miles easy. I was actually prescribed a 2-hour run, but I cut it short at 1:52 once I reached a half marathon. My legs were tired, and I figured that was plenty.

Before the Race
In terms of my goals for this race, I knew I was in better shape than when I ran a 42:09 on New Year's Eve. And that was a "long" course according to my Garmin. So I had those two things going for me. Working against me, however, was that this course was more challenging and that I didn't have a taper. Given all of this, I hoped to run a sub-42:00, but I wasn't sure how my legs would hold up on the hills.

Race morning arrived and Greg and I did our usual routine. When we arrived to the race, we went to the bathroom and warmed up for about 20 minutes. It was about 20 degrees and sunny with a very slight breeze. I thought this was perfect racing weather and I figured I might even get warm with the sun being so strong. I wore CW-X compression tights and a light-weight half-zip.

The start line was not shaded and my friends and I were commenting that we were actually warm. Greg was particularly worried that he had overdressed. I ran a 5K last February in sunny 14-degree weather and I actually felt hot at times, so I wasn't surprised that 20 could feel warm with direct sunlight.

Miles 1-2
The race started and I noticed that quite a few women totally sped past me right out of the gate. It was hard to believe that such a small race could attract so many fast women, but it did. This was a competitive field, and I think it's because it's one of the few races in the DC area in February. I noticed that I was running a 6:35 pace, so I reminded myself to run my own race and not worry about what these other women were doing.

In terms of the elevation profile, I had studied one of my friend's Strava data from last year. I've run this course as a 10-miler, but as a 10K, I didn't know when the ups and downs were. I knew to expect that the entire course would be hills-- almost no flat sections. But it's nice to know when to plan for the ups and downs. Based on my friend's Strava data, I knew that the first two miles were net uphill, so I figured I'd aim for around 6:50, depending on how it felt. Both miles clocked in at 6:47 so I knew I had set myself up well.

Miles 3-4
I was leap frogging with another women during these miles. She was quite strong, but I think I passed her for good during the 4th mile. There were also several women in sight who I was trying to catch, but I couldn't quite reach them. I knew my endurance was solid and I was confident that I could hold a strong pace throughout the race. We ran over a timing mat at the 5K point, and the results later showed that my split was 20:50. The exact same time as my 5K PR!

Miles 3-4 were net downhill, and my splits reflected that (6:30, 6:29) but it seemed as if there was much more uphill than down. In fact, it really felt like this race was net uphill. In the other popular 5K and 10K courses that I run, I usually notice long stretches of downhill. This was never the case- or so it seemed! I noticed long uphill stretches, but never fully rewarded with the reverse!

Miles 5-6
At this point, I knew I was on track to PR, I just had to keep it together and not fall off. But mile five
was brutal. So painful! I felt myself really slowing down and there was nothing I could do about it. The hills seemed to go on forever. They were so long. We would turn a corner and I would expect to see a downhill, but it kept being up. Up, up, up! I had to really rely on my mental toughness here. My legs were exhausted and I started cursing my coach for not allowing me to taper! I felt like I was going to totally bonk and miss my PR substantially. I logged a 6:52, which was definitely respectable given how awful I was feeling.

The last mile was supposed to be a net downhill, but that didn't happen until the very end of it. I looked down at my Garmin about a 1/3 of the way in and it read 7:11 for my pace. Oh man! I was running so hard and giving 100% of everything, but that Garmin would not budge out of the 7's! Finally I saw some Garmin movement about halfway through the mile back into the 6's. The last part of that mile was definitely downhill, but there were a lot of twists and turns as we made our way through a high school parking lot and onto a track. I ended up with a 6:40 for the 6th mile, which meant I must have been going super fast during the second half of it.

The last 0.26
This race finished on a track. We ran almost an entire lap, which was cool. It felt amazing (mentally) to be running on a flat surface, but it didn't feel much easier physically. Before arriving at the track, a woman passed me and I didn't have anything left in me to try and fight. I was spent. All I wanted was to try and squeak in a tiny PR at that point, which I realized was still possible.

With about just under 100 meters to go, I could see the finish line clock at 41:2X. I tried doing the math in my head to see if I could reach it under 42, but then I just told myself to give 110% and run my absolutely hardest possible. I was super motivated to get a sub-42 and it was right within my sights! I was able to find another gear and gun it for the finish line.

After the Race
Greg cheered me into the finish and told me that he ran a 40:58, which was a PR for him too. My friends Rochelle and Hannah also set big PRs, with Hannah going sub-40 for the first time and Rochelle winning the race. Hannah's husband also PR'ed with a sub-43. For a course that was so challenging, we certainly all pulled out some stellar performances. Greg and I cooled down for just over a mile and then went to check out the results.

I won first place in my age group and was the 11th overall female. The awards ceremony was thankfully held inside the school so we didn't freeze while waiting for the awards to be presented. A small group of us went out for a celebratory brunch afterwards. It was definitely a fun and proud morning for us all.

Most of all, I'm really excited about what this means for the Myrtle Beach marathon in four weeks. The fact that I ran a 41:51 on such a hilly course on tired legs definitely indicates that my stamina and speed are at an all-time high. Combined with the rest of my workout paces, I now have the confidence that I can run a 3:20 or faster.

But there's more work to be done! I have another tough week ahead of me, and I'm guessing a relatively short taper for the marathon itself.
at 2:14 PM