Since recovering from my posterior tibialis tendonitis injury, my training has really taken off. I kicked things off with a 10K on February 2, and then I got back into the full swing of marathon training. Boston is now 8 weeks away and my training for the past four weeks looks like this: 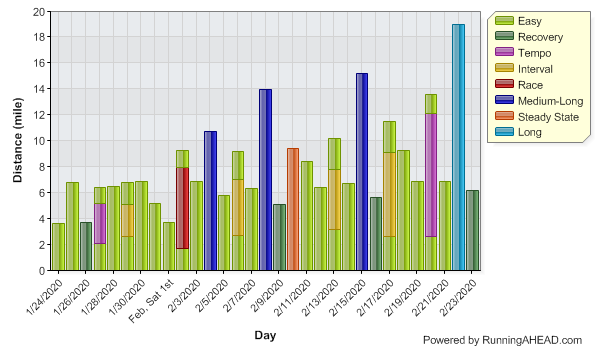 From a weekly mileage standpoint, the ramp-up looks like this:

This might seem like I ramped up too quickly but in late December and early January, I had been logging substantial mileage. It took me a full month to get back to where I had been before the 5 days off I took.

Training Highlights
My two most recent long runs have been very encouraging. As I discovered during my 10K, my endurance didn't seem to suffer from the time off. Therefore, when it came time to run 15 miles and then 19 miles, my legs performed really well.

Last weekend, I was prescribed 2 hours at a pace between 7:55-8:05. It was a perfect-weather morning and Greg and I ran together on the W&OD. We ended up doing a progression run from 8:25 down to 7:33, with an average pace of 7:53. I was very pleased with that. My legs felt energized the whole way through and there were some notable hills, too!

On Thursday of this week, I was prescribed 3 x 3 miles at half marathon effort with a mere 3 minutes recovery jog in between. The splits were:

I was very pleased with how everything felt and that I didn't feel like I was REALLY pushing until the last two miles. Including warm up and cool down, this was 13.6 miles on Thursday.

And then, just two days later, I went out for 19 miles. Yikes. Instead of hunting hills I ran a flatter route than usual to give my legs a break. I didn't expect this to be a progression and at the start of it I told myself the only goal was to get the miles done. I started at a pace of 8:37 and finish in the 7:40s, averaging 8:05 for the 19 miles. This was one of those runs that I just went on autopilot. At mile 12 I thought I would be in serious trouble come mile 16 based on how tired my legs were. But the run continued to be manageable, although uncomfortable.  I told myself I could stop at 17 miles-- that would be plenty considering I had only done 15 the weekend before. But then I got to 16 and bargained with myself to get to 18. And of course once I got to 18, I realized I would be able to run one more. So, 19 miles at an average pace of 8:05 just two days after 9 miles at half marathon pace!

I think that this type of thing will really build fitness so long as I can stay healthy. I did a recovery run today and even though my legs were dead, I was able to get through it without anything feeling off or painful. Including my foot!

And before moving on to the next topic, I would like to thank the weather gods for perfect weather during nearly all of my hard workouts this season. It has only snowed once, and it was a very small amount. I know many people are unhappy about this, but it has been great for my training. The irony is that I just got a treadmill over the summer and fully expected to get some use out of it this winter. But it has not been necessary. The worst I have dealt with is cold rain and wind, which isn't pleasant, but it's definitely manageable.

Up Next: The One City Half Marathon
I'm guessing my coach bumped me up to 19 miles yesterday because I have a half marathon next weekend, which is 7 weeks out from Boston. So after that, there won't be many weekends left for long runs. Especially considering I am also running the Cherry Blossom 10-miler.

I posted my half marathon pace workout to a running forum an the feedback I received from multiple experienced runners was that if I can average a pace of 6:52 for 9 miles in training, which I did, I should definitely be able to hold that in a half marathon race, and probably faster. That seems really intimidating to me, but logically it should be true. Especially since my legs were then able to handle 19 miles two days later. I didn't kill myself during that workout to get to those paces.

So that means I could likely run a sub 1:30 half marathon on Sunday. The weather is looking close to ideal (28 degrees at the start, 33 at the finish) so it really could be my day to crush it. I have an "elite" bib so I'm going to work hard to live up to that bib! Right now I think I will start the race at a pace of just under 7:00 and try to be in the high 6:40's by the end of the race.

Shoes
I was recently interviewed on the Run Farther & Faster podcast about my experience with the Nike Vaporfly Next%. Given that I have two pairs of these shoes with only 45 miles each on them, will I
wear them again?

For the half marathon, I will be wearing the Adidas Adios 4. It's the same shoe I wore for the 10K and it's really light. I like to be able to feel the ground under my feet, and I can't do that in the Vaporfly.

As for Cherry Blossom and Boston, I am not sure. I think I will probably stick to the Adios for Cherry Blossom, and only use the Vaporfly Next% in Boston if my foot is feeling 100% recovered and the weather is good enough to PR in. I'm not going to risk injury unless I think I could run the race of my life!

After having run a 10K, 2 half marathons, and a full marathon in the Vaporfly Next%, I don't think the shoe made me faster than I would have otherwise been. However, I recovered very quickly from both of those half marathons and was able to jump right back into training. And one of the benefits of the Nike Vaporfly is that your legs recover faster. Also, I did a 16 mile run with 13 at marathon pace and I felt like the shoes did take about 5 seconds per mile off my pace during that run. It was unbelievably fast. Of course-- the only time I experience their super speed powers is a training run! So. . . I am not giving up on the shoe entirely. Just for the immediate future.
at 1:56 PM