My number 1 goal for this year was to go to Africa and return home safely. And that goal has been accomplished. Greg and I were in Africa from August 7 to August 19. We visited South Africa, Zambia and Botswana. In this blog post, I am going to summarize some general topics that might be helpful for those seeking to go an African safari, as well as the pre-safari preparations. I will write a separate post about each of the places we stayed. 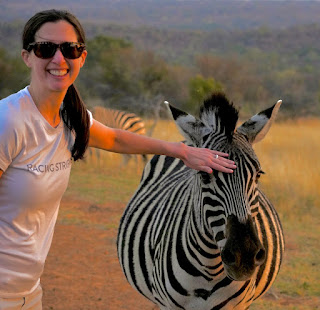 Booking the Safari
We booked this trip in 2019, a year in advance of our originally planned August 2020 vacation. This was meant to be a 10-year anniversary trip, but ended up being a 12-year anniversary trip. We were married on August 14, 2010. I researched various tour operators and settled on Giltedge to book the trip.

We knew of two properties we wanted to visit (I had been following them on Instagram for years) and we left the rest up to them. We told them that zebras were a priority. After a few phone conversations and some back-and-forth emails, we settled on an itinerary that Greg and I were excited about. They took care of everything for us except for our flights from the USA to Africa. They booked all of the transfers, all of the flights within Africa, and all of the accommodations.

Packing for the Trip
This was a big deal. I started packing about six weeks prior with the world's most extensive and organized Excel spreadsheet packing list. We packed every possible medication we might need from Pepto Bismol to Benadryl to NyQuil to Dramamine. We knew we wouldn't be able to go to the local CVS and buy whatever was needed. We packed sunscreen, bug spray, swim suits, safari clothing, running clothing, anti-malaria pills, binoculars, sunglasses, power convertors, camera equipment, books, and more. But we managed to fit it all into one large suitcase, one small suit case, a carry-on duffle bag and a backpack.

Packing cubes were a lifesaver. We had never used them before, but I learned about them on a travel website. They keep everything organized while maximizing the space you have in your suitcase. We were especially grateful we used them because both pieces of checked luggage ended up with sand in them during transit. I am not sure how or why, but we had to shake sand off of the packing cubes when we opened our bags.

We even had enough room in our luggage to Pack for a Purpose. The website had a list of items that were most needed in the communities we were visiting. We packed a large supply of pencils, colored pencils, and toothbrushes to give to the community. These items are so inexpensive on Amazon but make a huge difference in the communities that need them.

Vaccines
We went to a Passport Health travel clinic to get guidance on what types of shots were needed. I had actually researched everything myself online and knew what was needed, but none of my doctors would prescribe anti-malaria pills. We received: 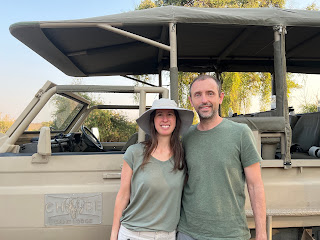 Safari clothing
All of the websites advised neutral color clothing to blend in with the surroundings. To avoid white
because of all the dust. To avoid black because it attracts bugs. To spray the clothing with Permethrin to repel bugs. But having been there, I don't think any of this mattered. What mattered was to have comfortable clothing for sitting in a safari vehicle.
But of course, I found it necessary to buy an entire safari wardrobe, so I bought 3 pairs of safari shorts from Eddie Bauer, safari pants, and neutral colored tops from Athleta. The safari hat was an absolute must because the sun was bright and I wanted to keep it off my face. I had also bought prescription sunglasses before the original 2020 trip. I had never worn them until now because I never have issues with my contact lenses. They were helpful because sand/dust gets in your eyes and having contacts in can be annoying.
Two of the four lodges we stayed at had a daily laundry service included, so we didn't need to pack two weeks' worth of clothing. This is how we were able to have just one large piece of luggage with the two smaller ones.
Weather
The climate was extremely dry, resulting in my skin feeling itchy/burning towards the end of the trip. My face was particularly dry, but thankfully Emirates had provided facial moisturizer in their overnight bag they gave us. The temperature was in the high 40s in the morning and it rose to the mid 80s in the afternoon. The heat never felt uncomfortable because it was a dry heat. I absolutely loved this weather, although my skin did not. It did not rain at all because it's their dry season. The weather was one of the best things about this trip.
Running
Two out of the four places we stayed had treadmills. The other 2 lodges were completely un-runable, particularly since running would trigger the predators to chase you. And you didn't want that! One of the places with treadmills also had an outdoor path, so we ran on that instead of the treadmills. I ran a total of 5 times on this trip, which is about what I had expected. The runs were short - no more than an hour long. Just enough to keep my body used to running.
Food, Drink and Water 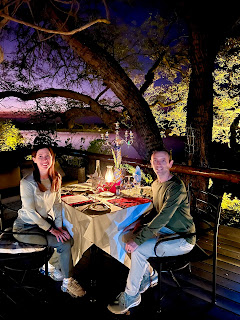 3 out of the 4 places we stayed included all meals. I was worried that with my dietary restrictions there would be times when I wouldn't be able to eat what was served. So I brought a nice stash of UCAN bars, Lara Bars, and protein waffles. It turns out I rarely dug into my stash because the food options were plentiful.
The quality of the food was excellent. Greg said he had the best beef he's ever tasted in Botswana. I don't eat beef or pork, and all of the lodges knew that in advance. But apparently I had to say that I also don't eat lamb, ostrich, or a slew of other non-beef meats that are popular in Africa.
I was a huge fan of the ginger ale (even though I am not a huge ginger ale drinker) because it actually tasted like ginger. Like a drinkable gingerbread cookie!
The tap water was drinkable at only 1 of the places we stayed. Otherwise, we had bottled water.
Hospitality
All of the lodge staff and the transfer drivers went out of their way to make us comfortable. It was obvious that it was not just "a job" for them- they were personally invested in making sure that we were taken care of. The guides were extremely knowledgeable and we had no needs that ever went unmet. I have not encountered such genuine service in the USA or Europe. The staff took the time to learn our names and always called us by our names. Also, our tour operator had informed the lodges that it was our anniversary so they each had something special planned for us!
Internet
All of the places we stayed had internet access, although it was often spotty. This was important to me because I enjoy sharing my experiences as they happen. I was able to post photos to Facebook everyday as well as Instagram. There was no internet access while out on safari, which was nice.
Covid
We were required to show our vaccination cards whenever transitioning countries. I think a negative PCR test would have worked too, but I am so thankful that we didn't have to worry about that. Masks were not required anywhere except when going through immigration. Supposedly they were required on all flights, but only about half of the passengers were wearing them, and this was not enforced by the flight attendants. In fact, there was a sign at the airport check in that said "please wear your mask" but the person behind the counter, next to the sign, was not wearing a mask.
I brought some heavy duty immune system vitamins with me, and I had been taking them regularly for the two weeks leading up to the trip. In the two weeks leading up to the trip, Greg and I did our own self-imposed quarantine. We did not want to risk getting sick beforehand. We didn't go out to eat and we made large grocery trips when the store was not crowded.
Thankfully, we did not get Covid on this trip, although I was quite sniffly. Possibly allergies or a mild cold.
Getting There
We flew on Emirates because my best friend travels to Africa regularly and told me it was the best airline. This meant a connection in Dubai. I didn't really think about it at the time, but flying through Dubai is not the most direct way to get to Johannesburg. So we probably could have had some shorter flights, but at least we were very comfortable. 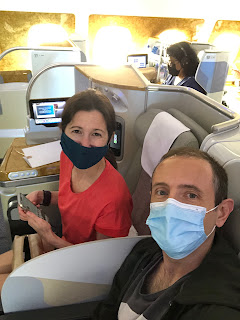 We flew business class which was a real treat. I had never flown business class before. It's extremely pricey, but we couldn't imagine flying for over 20 hours in normal airplane seats. As a bonus with business class, Emirates has a high-end car service included. So we were picked up in a luxury vehicle from our house on Saturday morning, August 6. Not having to pay for Ubers helped offset some of the cost!
It was a 13 hour flight to Dubai. We stayed awake the whole time and planned to sleep on the second flight. Our connection was 90 minutes, but that proved to be very tight. We did not anticipate having to switch terminals via bus and go through security again. By the time we reached our gate, it was already last call for boarding. But, at least I can say I was technically in Asia! Getting outside of the airport and getting on the bus counts in my book!
Then we had a 9-hour flight to Johannesburg and I was able to sleep for about half of this flight. We arrived at around 4:00pm local time. We spent the night at the airport hotel (inside the airport) because our first destination was Victoria Falls, which required yet another flight.
The airport hotel was pretty standard. It felt really good to get a solid night's sleep. And then the next morning we were off to Livingstone in Zambia. The flight was quick, but we needed to get a Visa when we reached immigration which took an annoyingly long amount of time. After that, our driver met us and drove us to Victoria Falls. Thankfully, that was a quick 20 minute drive.
More to come in the next blog post!
at 12:04 PM