For those of you who follow me more for the "Racing" and less for the "Stripes," the racing posts will resume once I am done documenting my stripey journey in Africa. It's important that I write about it while it's fresh in my head so I can remember as much as possible about this trip of a lifetime. 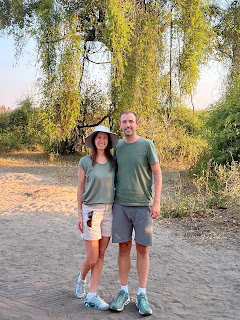 When our light aircraft landed back at Kasane airport in Botswana, it was time to collect the luggage that we checked. Greg couldn't immediately find the checked baggage slips and I was wondering how they would find our luggage. But as soon as we entered the airport, our luggage was right there, waiting for us! Everything was so well organized; they knew exactly when we would be coming back to the airport.

We were greeted by staff from Chobe Game lodge, and driven about 40 minutes to the lodge. This is the only lodge inside of Chobe National Park; all of the the surrounding lodges are outside of the park.

Chobe Game Lodge was more like a traditional hotel than a small lodge like Leroo La Tau. I think they have about 40 rooms, so it's significantly larger. It's managed by the same company - Desert & Delta Safaris. Several of the people we met at Leroo La Tau had already been to Chobe Game Lodge.

Chobe Game Lodge is staffed primarily by women. All of the safari guides are women, and I was told that was intentional. Our guide, Maggie, was phenomenal. We even had a personal restaurant server who knew our name and made sure we were taken care of at each meal.

The first thing we did at this lodge, even before eating lunch, was to use the treadmills at the gym! After not having run in three days, it felt so good to get the legs moving. We only ran for 30 minutes, but it was enough to get our heart rates up and to get back into the groove of running.

After we ate lunch, it was time for a sunset river safari. The lodge sits on the river, so it's super easy to hop on board a boat and see the wildlife gathering around the water. By the way, I should mention that both Leroo La Tau and Chobe Game Lodge are all-inclusive. All of the food and activities are included in the price of the stay. Daily laundry service is also included, which we definitely took advantage of. Light snacks and beverages are served and all river cruises and game drives.

I found the river cruise to be much more relaxing than the game drives. It was smoother (the drives are pretty bumpy) and I always love being out on the water.

After the cruise it was time for dinner and then we headed to sleep!

The next morning, we took advantage of the treadmills to run some speed work. We realized that the treadmills were on an incline, and there was no way to flatten them out. They were set up on a slant, which made it extra hard. Also, Chobe Game Lodge sits at around 3,500 feet of elevation, which is enough to make a difference for sea-level runners like Greg and me! So what started as a tempo run turned into tempo intervals. And then those turned into 5K effort intervals because it was so hard with the incline and the elevation. I was happy to get some harder work in; that's really all I cared about it. It was my only speed work for the entire two weeks.

We spent some time exploring the grounds of the lodge, went on another river cruise, and then had lunch. And then in the afternoon it was time for our first game drive in Chobe National Park. I was told that zebras did exist in the park, but they were not very common. Instead we saw loads of elephants, some giraffes and a group of lions!

Our guide received a phone call that lions were seen near us, so she drove us to the location where we found them sleeping. I could not believe how close we got to these lions. Apparently they do not recognize humans as prey as long as we are still and blend in with our surroundings. Maybe this was one of the times it was good to be wearing neutral colors! Anyway, I was about 10 feet away from these lions. As a zebra lover, I didn't expect myself to be so enamored with the lions. But I was. They were absolutely adorable and we had the pleasure of seeing them wake up and play with each other.
It was definitely an action-packed game drive. When we arrived back at the lodge it was time for yet another gourmet dinner. They did amazing job at making the dinners feel intimate and romantic.
We stayed at Chobe for a total of three nights. It was an experience of a lifetime and I highly recommend it. We went on a few more game drives and river cruises. We encountered warthogs while walking around the lodge.
The only zebras I saw were very far away when we were out on the boat. Everyone on the boat was focused on the hippos, which were in close view, but I was focused on the zebras that could only be viewed with binoculars! I knew I would be seeing more zebras at our next location, so I wasn't too bummed out that Chobe wasn't abundant with zebras.
From Chobe Game Lodge, we were driven to Kasane airport. We had a full day of travel ahead of us, which we weren't particularly looking forward to, but it would be worth it for our next and final destination.  Here are a few more photos from Chobe: 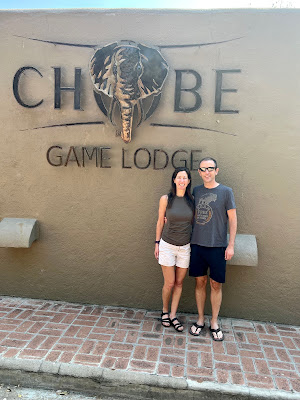 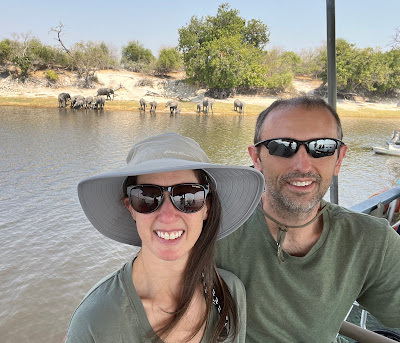