I just couldn't think of a creative title for this one. I'm tired! I ran the Fort Hunt 5K this morning in Alexandria, VA. Last year, Greg and I ran the 10K course at this same race.

The course is a 1.2 mile loop with gently rolling inclines and declines. Nothing too steep or long. The 10K is 5 laps exactly. The 5K is two laps, plus a little extra. The course is nicely shaded but that didn't matter because it was an overcast day.

Before The Race
Amazingly, I woke up just 1 minute before my alarm went off. I almost always wake up at least half an hour before my alarm on race morning, but that wasn't the case today. I was happy to maximize my sleep and not get woken up by an alarm! 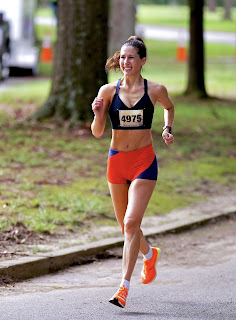 My first order of business was to drink some Maurten Drink Mix 160. Instead of having actual food to fuel a 5K race, I drink this mix as it's easier on my stomach. I had about 2/3 of the packet. After that, I got dressed and spent 5-10 minutes with my massage ball on the glutes. My physical therapist has told me it's the best way to get my glutes to activate. I also used "the stick" to massage my calves. I felt ready.

The race started at 8:00 and we left our house at 6:30 which ended up being perfect. It was a 40-minute drive during which we both needed to use the bathroom. It's not race morning if you don't need to use the bathroom every 10 minutes! We arrived at 7:15, used the bathrooms, got our bibs, and pinned them on.

We warmed up for about 15 minutes, during which time I took a caffeinated Maurten gel. I like to take that about 20 minutes prior to the start of a 5K so the caffeine has time to kick in, but the energy doesn't wear off while I'm still running. The downside is that it makes my stomach a little uneasy at the start line when combined with race jitters.

It was 69 degrees with a dew point of around 63, overcast with a light breeze. Average weather for this time of year so I can't complain. It did, however, feel way muggier than a 63 dew point - I would have guessed at least 95% humidity. The air felt thick and I didn't feel like I could get good clean breaths.

I wore a sports bra and spandex shorts along with my Adidas Adios Pro shoes.

Goals and Strategy
Since I had had success not looking at my Garmin during my previous two 5Ks, I figured I would take the same approach. At the Nags Head 5K 3 weeks ago, my average pace was 6:54 and my time was 21:11, because the course measured short on my Garmin. I was hoping to run sub 21:00 today, even with a non-short course. Goals are really just "hopes" when you aren't pacing with a Garmin - you run your hardest and you hope you meet your goal!

Mile 1:
For the first mile, we did an out-and-back that was about 1/3 of a mile each way, and then proceeded to begin our two laps around the circle. The race is organized by Bishop's Events, which puts on races nearly every weekend in VA/DC/MD area. They held all of their races throughout Covid and did a great job with their organization.

When I hit the turnaround about 3 minutes into the race, it was nice to have the race director say "good morning, Elizabeth." I replied back with a quick "hi!".

Greg had shot out much faster than me, as usual. In terms of women, my main competition was a little girl who looked like she was no more than 10 years old. She was serious looking and was there with (who I assumed to be) her brother, who ended up winning the 5K. She had amazingly good form and you could tell she was as tough as nails.

I was very tempted to look at my pace on my watch, but I practiced good restraint and instead focused on running with good form and keeping a positive mindset. I passed the little girl about a mile into the race. Since I wasn't looking at my watch, I don't know for sure, but I hadn't heard it beep for 1 mile yet as I passed her.

Mile 2:
The race started to feel hard and I had to chase negative thoughts out of my head. I continued to resist the urge to look at my pace. I had memories of the 10K from last year and I remembered how I kept getting faster and faster as the race progressed. I wanted the same thing to happen today. I felt strong, but it was definitely hard!

As I mentioned above, this course is a loop. Thus, to run the tangents, you must run as close to the inside of the loop as possible. I didn't do a great job of this because I was frequently passing other runners (most of them 10K runners, as the 10K started earlier than the 5K). Split: 6:50

Mile 3:
During this mile I finally allowed myself to look at my watch. My average pace was about what I expected it to be, but I didn't judge it and stayed emotion neutral. With one mile left to go, I realized I could kick it into high gear without the fear of bonking and that's exactly what I did. Split: 6:36.

I was the first female finisher, and that felt awesome. Granted, there were only 30 women in this 5K but a win is a win! The second place female was the little girl who ran 24:02.

Greg ran a time of 20:30, which would have been faster if he didn't stop to tie his shoe. Despite the stop, he was the 3rd place male.

After the Race
Greg and I collected our awards and then ran a 10-minute cool down. We were hoping to visit the horse who lived in a stable along the course, but the horse was out in his pasture and not in the stable. We chatted with the male winner (the brother of the little girl) who, at age 14, ran a time of 17:42. WHOA! He was frustrated at having been recently injured and therefore not close to his PR, but man - when you are 14 years old and running that kind of time, you have an amazing future ahead of you!

After the cool down Greg and I went out for crepes to celebrate. I got one with smoked salmon and one with bananas and brown sugar.

Final Thoughts and Key Takeaways
I have mixed feelings on this. There are plenty of positives here:

However, the perfectionist in me cannot help but feeling a little "meh" at this. I used to be able to run a sub 21:00 5K no problem. Even with humidity. Even on a course where I didn't run perfect tangents. I 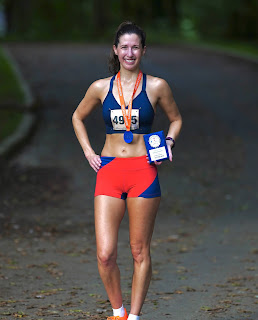 actually thought that sub 21 would be a soft goal, but apparently it was not.
Part of me feels frustrated with my fitness, and that I'm not coming back as quickly as I did from my bouts of mono. I am running a half marathon in 4 weeks and I feel utterly unprepared! My coach and I agreed that I needed to come back slowly and conservatively and so there hasn't been much speed work in my training. And I can't expect to run a blazing fast 5K with just a few workouts under my belt. So logically, I am right where I should be. But that doesn't mean I'm not getting impatient!
Another takeaway is that I should have started more aggressively. My fear of bonking and not knowing what pace I was running meant I was perhaps too conservative during the first two miles. 6:53, 6:50, 6:36 indicates that I probably had a faster time in me. The elevation profile for each mile was roughly the same. I'll bet if they moved the finish line to make this a 4-mile race, I could have run the same overall pace.
So. . . to look at the Garmin or not? I don't know. I definitely want to "feel" my way through a race and not be a slave to the watch. But at the same time, if I had seen a 6:53 pace during that first mile, I probably would have pushed a little harder with the confidence of knowing I wasn't going to bonk.
Anyway, I will continue to trust the process, try to be patient, and be grateful that cooler weather is on the horizon!
at 12:46 PM