This morning I ran the Fort Hunt 10K in Alexandria, Va. Although government officials in Northern Virginia are still denying permits to race directors, this race was a go because it took place in a park and didn't require any road closures. And it was super small. The 10K had 18 finishers and the 5K had 51 finishers.

Small as it was, this race was not without stiff competition. Some pretty serious athletes lined up at the start line.

Before the Race
This race had been on the calendar for about a month. I ran a 5K exactly one month ago in the Outer Banks, and I typically like to do one race per month. My training volume has picked up and I've logged some solid workouts, so I felt like I was in shape to run a solid 10K. My average pace for that 5K was 6:59 due to the extreme heat. I thought it would be a good accomplishment if I could turn that into my 10K pace today.

Greg and I got a late start. Typically I wake up between 5:00 and 5:30 without an alarm. I set my alarm clock to 5:45 as a backup on the off chance that I would sleep late. And sure enough, the one morning I sleep late, that's when the alarm goes off! Realistically, I thought I would be awake at 5:30 and have nearly an hour to get ready. But that was not the case.

We quickly got dressed, ate our English muffins with peanut butter, went to the bathroom, got our water bottles ready and off we went. The plan was to leave the house at 6:25, but at 6:20, Greg had just started making his coffee! Thankfully we were pretty quick about everything and left the house at 6:35, only 10 minutes later than planned. That said, I had underestimated how long the drive would be. I had assumed 35 minutes but it was actually 45 minutes.

With a 7:45 race start, we were cutting it very close. We arrived at 7:15 and immediately headed for the park bathrooms. If you ever run in Fort Hunt, I do not recommend you use the indoor bathrooms. There were mosquitos everywhere. And moths and spiders. And the bugs were in the toilets, on the stalls, flying around. It was disgusting.

After using the bathroom, we picked up our bibs and shirts. It was now 7:25, which meant we had 20 minutes to pin on our bibs, warm up, and use the bathroom a final time (I opted for a porta-potty and it was far more pleasant). For this reason, my warm up was only 0.8 miles. I wasn't too worried about it though, because I typically opt for a much shorter warm up when it's warm/humid.

Race weather and strategy
Speaking of weather, it was 70 degrees with 94% humidity, overcast, and a little bit of wind. Typically I do not run any longer than a 5K in conditions like these. I usually wait until October to run a 10K, but I couldn't find any 10Ks in October as my usual options were canceled. Given that I got mono two days after a 5K in similar conditions back in 2018, I was a little apprehensive about this situation. The last thing I needed was to end up sick with mono again after having avoided it all summer.

So my strategy was to run by effort. I threw all my time goals out the window. Humidity is deceptive, especially with overcast skies. It doesn't feel oppressive at first but then it sneaks up on you. I have many examples of humidity related bonks; both in workouts and in races. I did not want a repeat. Top of mind was a 10K I ran in February of 2019 out in Arizona. That race as 58 degrees and very humid and I crashed and burned my way to a time of 44:29, which was 3 minutes off of my goal!

I approached this race very cautiously for those two reasons: not wanting to get sick, and not wanting to crash and burn. The goal was even splits or negative splits. Even slightly positive splits would have been fine as long as it wasn't a total bonk. Anyway, the race course was 5 loops of Fort Hunt Park. It was a completely paved road with gently rolling hills throughout. This struck me as a very fast course because none of the hills were too long or too steep. Just enough to get some good variation and that wonderful downhill relief from time to time. 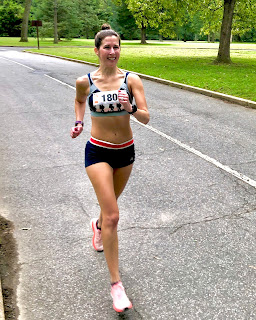 Miles 1-2
The race started and I noticed a woman bolt out ahead of me at lightening speed. I definitely did not try to follow her. Given what I know about the deceptiveness of humidity, I thought I could possibly catch her later on if she had mis-judged the impact of the conditions and gone out too fast. Greg had also gone out like a lightening bolt. So fast I thought he might even lap me!

I had not run at Fort Hunt park since January 2010 during the epic blizzard we had that winter. Fort Hunt Park was the only plowed surface I knew of that was run-able so I had gone there twice for my long runs. It's a loop of about 1.25 miles and as I said earlier, it's gently rolling with the hills being short and not terribly steep. I suspected that running 5 laps around would be mentally exhausting but it turned out not to be. I liked knowing what to expect each lap.

I lost sight of the woman ahead of me after only 3-4 minutes. And by the end of the first mile, I had given up all hope of catching her. She had such a large lead that I'd have to really speed up and/or she would have to really slow down.

Miles 3-4
I was pleased that I was holding steady for the first two miles. I would have liked the splits to have been faster, but I knew that I was going at a pace that would set me up for success later in the race. Thus, when my Garmin beeped 7:02 for the 3rd split, I was really excited. In fact, that third mile went by so quickly I could hardly believe it when my watch beeped.

I didn't consciously increase my effort level, but I definitely did. When I run long runs, I usually don't try to speed up, but I do so naturally if I'm having a good day. The same thing was happening here. Without even trying to put any more effort into the race, my pace was getting faster. I was shocked when mile 4 beeped in 6:54. 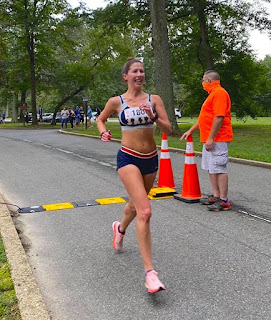 Miles 5-6
Could I hold onto this pace? I didn't think I could but once again, my focus was not on pace but on effort. I started to tire in the 5th mile, but I reminded myself that this was a race and I needed to press on and keep working hard. I told myself to relax and focus on my form. I thought back to all my strength training sessions and I told myself that even though I was tired, my legs were the strongest they have ever been so they would power me through.

About halfway through the last lap, I saw the leading woman up ahead. And I realized I was closing the gap. I tried to think of a strategy for passing her, but my mind was too busy convincing myself to push hard to come up with a sound plan. The easiest thing would simply be to maintain my pace because at this rate, I would catch her and pass her. The unknown was if she was crashing or if she had a second wind in her.

I maintained my pace, which was around 7:00 and that allowed me to catch up to her and run beside her with about half a mile to go. As soon as she noticed me she pulled ahead. With a half a mile to go, I wasn't ready to surge yet, so I hoped that she would fade and then I would surge ahead in the last 0.2. But she pulled farther ahead and as much as I tried to keep up with her, I could not. And admittedly, I didn't have my usual motivation to win. Mentally I was in "hard workout" mode and I couldn't easily shift into race mode.

So she ended up winning by 4 seconds! So close!

After the Race
My official time for the race was 43:37. This is an average pace of 7:02. The winning time was 43:33. Given that there were only seven female competitors, I'm not loving that I placed second. But, that first place female was a force to be reckoned with for sure! And she was under 40, so I technically won my age group. 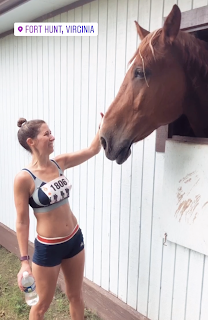 Greg set a PR in 40:20. This is a PR by about 30 seconds. I am not surprised because he has gotten WAY faster over the past year. The key to his success has been consistency and volume. I'm his coach, and by prescribing him more mileage with less speed work, he is less prone to injury. If he can run a time of 40:20 in these conditions, I definitely think he can qualify for Boston later this fall if the conditions align. He placed 4th overall. There were only 11 male competitors, but they were all really fast.

Greg and I cooled down together and we went to visit the horse that we saw along the way. What a beautiful animal! Our cool down was 1.5 miles, and I wasn't dying.

Final Thoughts and Key Takeaways
My heart rate data shows that I worked really hard today and supports my assertion that my body does not tolerate humidity. Here are the average heart rates for each mile: 144, 168, 172, 176, 181, 192, (195 for the last 0.2). Normally my heart rate would be more steady.

To compare, here is heart rate data from a 10K that I ran earlier this year in cold weather: 145, 170, 174, 174, 174, 172 (172 for the last 0.2). Looking at other athletes' heart rate data from today on Strava, they do not have the same heart rate drift that I do. I know I shouldn't need to validate my humidity/heat sensitivity this way, but it's always nice to have data that supports why I run so much slower in these conditions.

I think I had a really good day! Normally in these conditions I feel like I lack energy and like I am running through molasses. But today I felt strong and I ran a solid race and I achieved my goal of a negative split. I do think that if I had gone out at a pace of 6:55 the story would have been different. Here's why I think I managed the humidity well:

My next race will be a half marathon in three weeks. If conditions are good, I can turn this 7:02 pace into my half marathon pace. Funny enough, that still wouldn't even be a PR! I'd need to run a 6:54 pace to PR a half marathon. Onward!
at 2:16 PM