I have multiple topics to cover in this blog. First, my Achilles Tendinopathy has flared up in both feet. Second, I have ramped up my training in the heat. Third, I'm going to comment on the Boston Marathon letting additional qualifiers in. 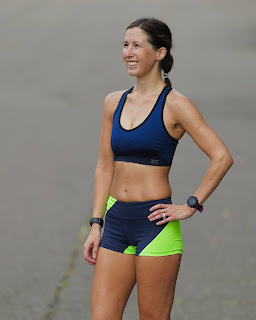 Achilles
My insertional achilles tendonitis (or tendinopathy, more correctly) flared up at the end of last week due to repeated treadmill runs. I have been battling Achilles tenderness and stiffness off and on since 2017. It goes away completely when I take a break from running (like with my recent 8-week lay off), but comes right back the moment I resume training. I try to stay on top of my rehab exercises--eccentric weighted heel drops--but I admittedly have not been doing them every single day.

For whatever reason (lack of variation, change of gait, amount of impact), my Achilles tendons do not like the treadmill. Last week it was abnormally warm and humid so I ran on the treadmill Wednesday, Thursday, and Friday. And then on Saturday I did my long run outdoors, which is never really Achilles-friendly!

The good thing about insertional Achilles tendinopathy is that you aren't at risk for rupturing the tendon when you run. And it doesn't hurt that much while running. What sucks about it is that it's very difficult to cure 100%, and walking can be painful, particularly barefoot around the house.

I went to my doctor on Tuesday for a follow up on my groin injury, and while I was there, we talked about my Achilles issues. He did an ultrasound and we could see where there was irritation and small little holes in the tendons. He recommended I have a procedure done called ultrasound-guided tendon scraping. I am having this done in a few weeks. He will go into both Achilles tendons with a needle, using an ultrasound, and create space in between blood vessels that are rubbing together and creating friction. (This might not be a 100% accurate description, but it's how I remember him describing it.) The recovery is only a few days and then I can start running again. He says he does this procedure frequently and if my symptoms are caused by what is seen on the ultrasound, it will provide immediate relief.

Of course the only way to really recover is 8-12 weeks of the PT exercises every day, twice a day. I am committed to doing them, but they sure are time consuming and boring. My physical therapist theorizes that because my glutes still don't always fire, I'm pushing off with my calf, creating tension in the soleus, resulting in the irritation of the tendon at the insertion point. He dry needled my glutes on Friday and also gave me a painful calf massage. Later that day I was walking around without pain, so it definitely worked.

My plan is to continue training on it (since it's not at risk for rupture), do the PT exercises, go to PT weekly to get needling and massage, and have the procedure in mid-September.

Training in the Humidity
Because the treadmill had caused such a flare up, I did not use the treadmill at all this week. I would have liked to because we had dew points at 72-73 each morning and the air was incredibly thick. My solution was to run extremely slowly (except for the one track workout) and drink loads of water + electrolytes throughout the day.

I was able to knock out 49 miles this week with most of them being slower than a 9:00 pace. But in this weather, it's all about effort, time on my feet, and not over-exerting myself. We won't see the heat and humidity drop until Thursday, so unfortunately I'll have to do another speed workout in the heat on Monday. If my Achilles are feeling okay, I might resort to the treadmill Tuesday or Wednesday.

Last weekend, I knocked out 14 miles at an average pace of 9:00. Yesterday, I ran 14 miles at an average pace of 8:59. Both were progression runs starting in the 10's and ending in the low 8's. It's always good to NOT bonk in the heat and still have a little more to give in that final mile. The Richmond Marathon is on November 13, so my long runs will start getting longer very soon. I'm also running a half marathon on October 3. At this point I really don't think I will be in half marathon shape, but a decent amount of fitness can be built over 5 weeks. (Well - 4 weeks excluding the taper week leading up to the race).

It's actually hard to know what kind of shape I'm in with all of my runs being in such crazy humidity and I am just trying to survive them. But I have only done one lactate threshold workout since returning from injury + the two 5Ks. Why? Because my coach and I prioritized coming back safely rather than pushing me into tempo runs right away. It was the right approach but unfortunately doesn't bode well for my confidence at least as of today!

First of all, I am skeptical that the race will actually happen. We are already seeing marathons being cancelled and Massachusetts is one of the more risk-averse states. But regardless if the live race happens or not, my thoughts are as follows.

The Boston Athletic Association (B.A.A.) can do whatever they want. It's their race, and they aren't obligated to be fair. I do believe they try to be as fair as possible, but there are many other factors that come into play. We, as runners, don't have visibility into their decision making process so it's impossible to know exactly what they were dealing with. They are already having to deal with towns like Brookline threatening to deny them a permit if they don't meet certain demands.

not? Maybe, maybe not. Maybe it is fair because the person with the 2:00 buffer committed to Boston. They paid for the virtual race. They said "I will run Boston no matter what, even if it's virtual!". There is a lot to be said for that level of commitment to the spirit of the Boston Marathon. And they did, in fact, qualify for the race. This doesn't follow the traditional method of "fastest first" - but that doesn't mean it's not a viable method for selecting race entrants.

What most likely happened is that the Boston Marathon had some spots open up, and that number of spots was similar to the number of virtual entrants, so boom- it was logistically easy. And they even offered up spots to those who missed the cutoff by 20 seconds or less. And imagine how happy those virtual runners must be! The B.A.A. didn't have to release any extra slots. But they did, and now more people get to run it, which holistically is a good thing.

I feel badly for the 2020 entrants who didn't get into 2021 and don't have a qualifying time for 2022. That sucks, especially if it will be difficult for them to ever qualify in the future. I do believe that the majority of the qualifiers WILL be able to qualify again, it just requires more hard work and more patience.

Life isn't always fair. We can't expect the B.A.A. to always do the most fair thing. All we can do is train our hardest and try our best.