I think I am at a point where I can say I am "back" as opposed to "coming back" from an injury. June was all about re-introducing running with run/walk intervals. July was about gradually ramping up the mileage without any speed work. I ran 40 miles last week, and I think that's a solid base to begin training for a marathon. My goal is still the Richmond Marathon in mid-November, so I have plenty of time. 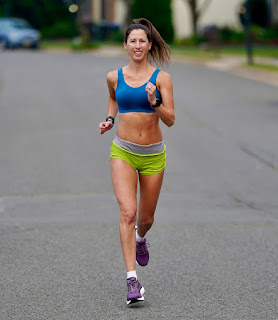 I've gotten my long run up to 11.5 miles (yesterday) and I've started including some 20-second strides inmy runs to get my legs used to faster stuff. I want to make sure I peak at the right time. With the Two Rivers Marathon, I think I peaked about two weeks before the race. By the time race day came, I wasn't feeling fully recovered and peppy. My originally scheduled marathon was three weeks prior, but then was canceled- so much of this was out of my control. I think my coach did a great job with my program despite the change of race date, the training cycle was simply too long.

I mentioned in my previous post that I switched coaches within the McMillan family so that I am using the same person for both strength training and running. So there are a bunch of new variables now:

As for my form, I've really made great "strides" there. My cadence for most runs used to be around 195-200. Now it's around 180-185. This morning I ran a recovery run at an average pace of 9:09, and my average cadence was 182. I compared it to a recovery run in January that was a similar pace, but my cadence was 199.  My cadence on long runs has also decreased.
I'm picking up my feet and using my glutes to power my stride. Previously I was shuffling a long and taking loads of steps, but the steps were super short and close to the ground. I was relying too much on my adductors which is partially how I got injured. Most runners strive to increase their cadence to get closer to 180. A faster turnover logically leads to faster running. But in my case, slowing down the cadence has allowed me to run with more power. This video shows the difference before and after the injury.
Thankfully this summer has not been as hot/humid as most summers here in the Washington DC area. I've been using my treadmill about once a week, but most days running outdoors has been manageable. It took me longer to acclimate this year because I began my comeback with very short run/walks which don't really work towards acclimation. I started running again in early June but it wasn't until mid July that I felt like I was acclimated. Usually I loathe summer running and I count down the days until the fall. But this summer I have embraced it because I generally enjoy warm weather for everything else. Just not running.
I feel ready to tackle August and the marathon training that lies ahead. I'm committed to doing my strength and stability exercises multiple times a week and focusing on my form on every single run.