BYOC: Bring Your Own Competition

Greg and I are spending the week in the Outer Banks of North Carolina. We are staying in the same condo that we did last year and are here during the same week. Our wedding anniversary is at the end of the week and we will be celebrating 11 years on Saturday.

We arrived on Saturday evening and I was eager to watch the men's Olympic Marathon. I had been unable to watch the women's marathon on Friday because we are not cable subscribers and there was no way to stream it.

The condo had a yellow sheet of paper with all the channels listed, and the USA Network was listed as22. That was the channel with the marathon. I flipped to it, but the channels went from 21 to 23 and skipped right over 22. I tried typing "22" into the keypad but without luck. I was so sad! I had really been looking forward to watching the men's marathon. So I called the cable company to ask if there was an outage on that channel and they were unable to help.

I have to admit I sulked a little bit because this condo literally had 200+ channels, but not USA. What are the chances that the ONE channel we wanted would not be available. Finally I decided to flip through each channel manually in the hopes that the yellow sheet of paper was wrong. When I finally got to channel 982 (I think this was the highest) it was the USA Network! YES! So we were able to watch the men's Olympic Marathon after all. It was just the inspiration I needed to be running all week in insanely warm and humid weather.

Background
As for the race, last year Greg and I ran the Outer Banks Lighthouse 5K in Corolla. It was a 40-45 minute drive, but well worth it. Typically the Outer Banks Running Company also holds a race in Nags Head, which is much closer to our condo. But last year it was cancelled due to Covid. We didn't understand why it was okay to have the Corolla race but not the other, but we didn't worry about it too much.

Shortly after arriving, I learned that my friend Meredith was staying practically next door to us. It was literally 0.2 miles away according to Google Maps. We decided to run together on Monday morning,

during I which I tried my best to convince her to run the race, which was scheduled for Thursday. She was hesitant, as she has not raced since 2019, but I told her I was just looking at it as a fun run. Of course I would try my hardest, but you can't really run a fast time when it's 80 degrees and crazy humid.

Interestingly, the last time I had seen Meredith was at her 2019 race- the Indianapolis Monumental Marathon in November. I had run the half marathon and cheered her into her full marathon finish. She thought about it over the next two days and ultimately decided to run it with Greg and me. Hooray!

My mindset for the race was to run it smart but hard, without looking at my Garmin. Since I had such success with the not-looking-at-pace approach during the Firecracker 5K in July, I figured it would be good to do again.

Before the Race
I woke up at around 5:30 and I drank about half a packet of the Maurten Drink Mix 160. I have decided to prefer to use the Drink Mix instead of having a food breakfast because it's easier on my stomach. Greg had his standard English Muffin with peanut butter.

As for hydration, both Greg and I had taken that very seriously all week long. I was aiming for 60+ ounces a day, with half of those containing electrolytes. I brought multiple packets of UCAN Hydrate with me and we also bought several bottles of Gatorade. I had felt sluggish towards the end of last week and I attributed it toward cumulative dehydration. We were sweating so much with our runs each morning and sitting on the beach all day, that we knew hydration would be so, so, SO critical.

We picked up Meredith at 7:00 and were on our way. It was a 12-minute drive, which was a nice contrast to last year's 45 minute excursion. Once we arrived we got our bibs and shirts, pinned them on and warmed up. I had a Maurten caffeinated gel 20 minutes before start time along with some water.

It was 80 degrees with around 90% humidity. Sunny with wind of 5-10 mph. Similar conditions to last year, when I had run a time of 21:31. Last year I had been training all summer, with speed work, and was not coming off an injury. This year, I had no speed work under my belt aside from some 1-minute strides in a workout last week. Based on that alone, I thought it would be unlikely more me to beat my 21:31 time, but I didn't set any limitations.

We lined up at the start line and I observed that there were far fewer runners than there had been at the Corolla race last year. Maybe it was because there was only one race instead of two last year, but I think there was around 150-200 people last year and maybe about 50-60 this year. It was a small but competitive field.

Mile 1
The race started and I went out at what felt like marathon pace. I knew I would need a conservative start with this heat. Even in a 5K, once it hits you - it hits you! I did not want to bonk. Greg shot out ahead and so did Meredith. As well as like 5 other women. Geeze! But I decided to run my own race and not be pulled out too fast by the others. I'd save my energy for the final mile if I wasn't bonking by then.

Mile 2
Greg was so far ahead he was out of my line of sight. Meredith was also quite far ahead-- about 30 seconds, I would later learn. I could still see her but barely. There were four other women up ahead, and one who I believed to be tailing me pretty closely. The cool thing is, 5 out of 6 of us were in our 40s (which I later learned by looking at the race results). The course was an out-and-back so we turned around at the halfway point. This mile had some hills. Nothing major, but when you're at the beach expecting everything to be flat, these were noticeable. During this mile, I accidentally looked at my Garmin to see how far I had run. Habit I guess! But thankfully I didn't see the pace.

Mile 3
The race felt very hard at this point and I was no longer holding back. I noticed that I was getting closer and closer to Meredith. I didn't think it would be possible for me to catch her because she had a large lead and she's also a faster runner than me. But I used her as motivation to keep pushing hard. With about a quarter mile to, I had caught up with her. When she saw me beside her, she sped up and we raced to the finish line. 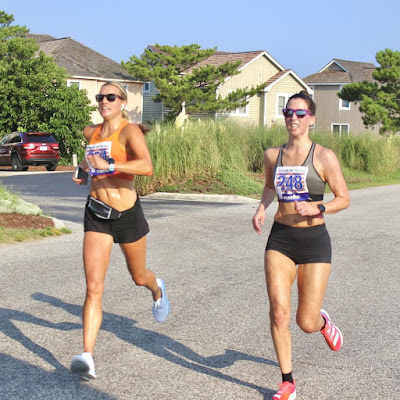 The Finish
It was neck-and-neck and we crossed the finish line at the same time! So exciting. My Garmin logged a pace of 5:30 for the final stretch after mile marker 3.

It took me a few minutes to recover and become coherent. When I did, I met back up with Greg and Meredith and we shared our race experiences.

I was surprised that my second mile was slower than my first because it felt like I was giving far more effort. I definitely didn't think I was capable of a sub 6:50 final mile in this kind of heat, but I did it!

After the Race
They gave out awards, and the Master's Winner was announced as Meredith. I was super happy for her, but obviously curious as to the difference in our times. The timer said she had run 21:11.0 and I had run 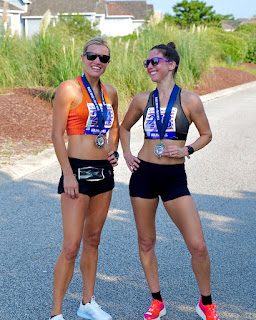 I was thrilled for her and pleased that I was so close. Meredith is a really strong runner, so finishing anywhere near her is a massive accomplishment. Without Meredith I would not have run as fast as I did at the end. Competition really helps you give it everything you have.

We did the world's shortest cool down (like 0.3 of a mile) and then went back to our condo.

Final Thoughts
I loved this race experience and I'm so happy we did it, and that Meredith joined in. What a small world that she ended up staying so close to us! And nothing beats relaxing at the beach post race to bask in the achievement.

I'm clearly fitter than I thought, and I think that my hydration this week was a big factor in my success. I don't have another race scheduled until October, but maybe I will find another 5K in September just to stay fresh and just because I love racing. 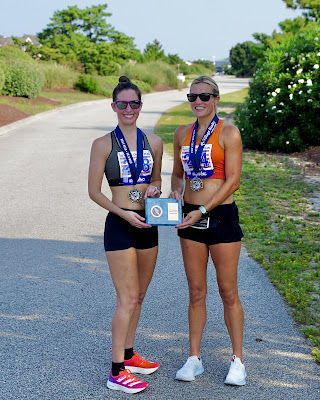 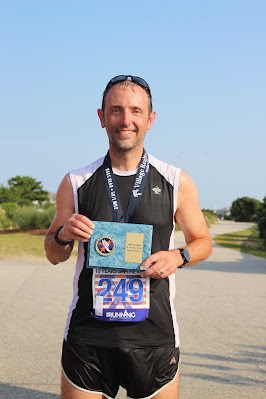