I did it again. . . I ran a real, live race in the midst of the COVID-19 cancellation era! (My first race back was a 1-mile race in Winchester). But this race wasn't something that I searched far and wide for, it just happened to be occurring during Greg and my vacation 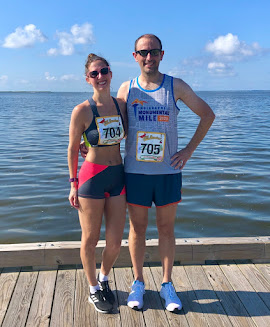 to the Outer Banks. The Lighthouse 5K is a series that is held every Wednesday in the summer in Corolla,  North Carolina. Even though we've been to the Outer Banks many times before, we've always gone before or after "busy season" so the race wasn't going on. This year, we went during the height of the season to celebrate our 10-year wedding anniversary.

The original plan was to go to Africa to celebrate our anniversary. We had a trip planned that started in Victoria Falls, then onto two safari locations in Botwana, and then to Zebras Crossing Lodge in South Africa. All four properties we booked were prime zebra viewing locations. In one of them, it's not uncommon to see 100+ zebras outside of your window. But alas, we had to postpone our trip to August 2021. I seriously hope we can go then, and that the places we are staying haven't gone out of business.

Because Africa was postponed, we decided to head down to the Outer Banks to celebrate our anniversary. We arrived on Saturday to a beachfront condo. On Sunday morning, we did a "sharpening" workout of 8 x 400m on the track with 200m recovery jogs. Luckily, there was a track in close proximity to our condo which we had run on during previous trips. It was 78 degrees with high humidity, so we were thankful that the prescribed pace was 10K effort increasing to 5K effort by the end: 1:39, 1:40, 1:39, 1:38, 1:39, 1:37, 1:37, 1:37.

On Monday morning, we ran short and easy: just 40 minutes. Thank goodness for that because once again we were faced with 78 degree weather and high humidity. Of course we had all day to recover and I was really good about drinking plenty of water + UCAN Hydrate every day. Not only did we sweat off pounds of water during our runs, but laying on the beach in the sun is also dehydrating.

On Tuesday, we did a short set of 3 x 200m strides just to get the legs moving, plus warm up and cool down. And then we were ready for race day!

Before the Race
We woke up at 5:40 and I had my standard English muffin with peanut butter. We packed the car with a cooler of ice, water, and towels for afterwards. Greg unfortunately forgot his Garmin, which we realized about 3 minutes into the drive. We could have possibly turned around for it, but then we would have been cutting it very close. He decided to run without it.

When we got to the race, I picked up our bibs and searched for my Instagram friend Heidi. We met nearly two years ago on Instagram and we just happened to both be in the Outer Banks on vacation. It was really

cool to see a friendly face and get to know her and her family a little bit. I took a gel about 20 minutes prior to race start and did a very short warm up of only 0.6 mile, which included strides. My coach had advised to keep the warm up short (although he probably meant more like 1 mile) because it was hot.

Officially it was 79 degrees with a "real feel" of 90 due to the humidity. And sunny! One of the hottest races I have ever run. I can only think of one that was hotter, and that one was not as humid. I totally did not care. I was just happy to be racing. I didn't have a time goal - I was going to try and win an award of some kind. There were no age group awards but there was a Master's award and then the top 3 men and women.

The race had about 150 runners. I had looked at the results from past weeks and it was competitive for a vacation race. It seemed as if families came out with their cross-country high schoolers and college students. If I recall correctly, nearly all of the races had been won in 19:xx for the women. I knew that sub 20 would not be possible in these conditions, so I was going for the Master's win or maybe third place.

The race was delayed by 8 minutes so that runners could finish packet pickup. They started the runners in waves containing about 30 people each. I lined up in the first wave because the awards would be based on gun time, not chip time. Greg was in the second wave.

Mile 1: 6:56
The race started on grass but we quickly transitioned to pavement. Most of the race was on a concrete sidewalk. This wasn't ideal, but whatever- I will take what I can get! The race was mostly flat with a few inclines/declines. Interestingly, there was another small race series in a different part of the Outer Banks (Nags Head) that was canceled due to COVID. This shows that there are not hard-and-fast rules about racing in these times. Some race directors and/or town officials are canceling races while some are holding races with safety modifications. It really just depends on who is in charge.

Anyway, I ran this mile based on effort and I slotted into 3rd place pretty early on. I hoped to maintain that position for the entirety of the race but I knew Heidi was behind me, and she was fast. Greg blew by me and I knew he'd end up having a really strong race.

Mile 2: 7:00
I was not using the Garmin to pace myself-- I glanced at it a few times to know how far I had gone because the race was starting to hurt pretty badly. The sun was beating down on me and I had to exert so much effort just to run at a pace that is slower than my half marathon pace from March! At the turnaround point, the female leader cheered me on and I did the same for her. I also realized that the 4th and 5th place females were tailing me pretty closely. Darn it- this meant I had to work hard to maintain my position!

Mile 3: 7:04
This mile was all about hanging on and not backing down. There was no way I could give anymore (see heart rate below). I told myself to hold steady and maintain my position no matter what. The 2nd place female was visible but there would be no catching her. Finally we reached the grassy area and I sprint toward the finish line. (6:24 pace for the last bit). I was actually surprised at how fast that was for being on the grass. I never run on grass.

My max heart rate was 200. I actually didn't think that my max heart rate was that high. I think the highest I have ever seen it in a race is 193, and that was at the July 4th 5K from last summer. So even though my paces were slower than my half marathon pace, it was clear that I was redlining based on my heart rate data.

After the Race
As the 3rd female, I wasn't sure if that would be my prize or if I'd win the Master's award. They ended up giving me the award for 3rd female and Heidi won the Master's award. It really doesn't matter anyway because all of the awards were the same: a medal. That was fine with me. I didn't need a prize, I just wanted the glory of winning an award of some kind.

I was totally gassed at the end and thank God for the icy cold face towels they gave us at the finish. That towel felt AMAZING on my blazing hot face.

The female winner introduced herself to me as someone who was reading my book, Boston Bound! Wow!

What a small world. In fact, she had the book at her beach house! We instantly bonded and ran our cool down together. It was a longer cool down than warm up, which wasn't hard to do given the warm up was only 0.6 of a mile! We chatted about all things running and it's amazing how much two strangers can connect when they are both runners. Her daughter was the 2nd female finisher, and was happy to race given the cancelation of cross country.

This is what I love about racing. It's not just about the competition and the time on the clock. It's about the community, sharing experiences and making connections.

Greg ran a blazing fast 19:27 which won him the Master's award for the men (he was the 4th male overall). Once the temperature starts to drop below 60 and we can find a 5K, I can see him breaking 19:00. So exciting!

After the awards ceremony we said goodbye to Heidi and Jenny and made our way to Duck Donuts for a celebratory treat!

Final Thoughts and Key Takeaways
Greg and I were happy to get our race "fix" in during vacation. It was a really relaxed experience as all the runners were pretty much on vacation. The energy was positive and many people hadn't been able to race since February. This was my first 5K since January, and I typically run about six 5Ks per year.

I'm pleased with my effort level and based on my heart rate there is no question that I gave it my all. Given that I typically run 21:xx when it's in the low 70s, it was encouraging that I was able to do that in the high 70s with a real feel of 90!

Greg and I officially celebrate 10 years of marriage today! It's been a wonderful vacation with great weather, great running, and great food. I'm looking forward to the next 10. 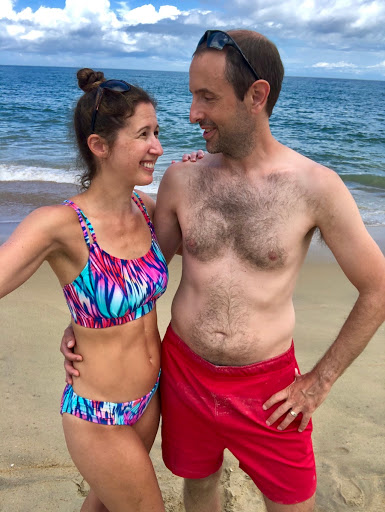