What to do about a fall marathon?

Plan "A" was to take a trip to Africa during the last two weeks of August and then begin training for the Rehoboth Beach marathon, occurring the first weekend in December. The trip got postponed, which meant I would want to postpone the late fall marathon with it. (I'll run Rehoboth Beach in 2021 to correspond with the 2021 Africa trip, since I'll need a late fall marathon next year). Bring on Plan B.

When that was canceled, I moved onto Plan C, but also devised a Plan D, E, and F. All of which I tracked in a spreadsheet, because this was getting complicated. Plan C was to run the Harrisburg Marathon in Pennsylvania on November 8. I registered, told my coach about it, and mentally adjusted to that being my race. As of now, Plan C is a go; more on that in a bit.

Plan D was to run the New Jersey Marathon, which was later canceled. Plan E is to run the Rehoboth Beach Marathon (not yet canceled), since I'm already registered for it. That's one month later than my target but I can adjust my training to stay in shape for it. Plan F is to run a small marathon in Maryland, near the Baltimore area the last weekend of November. I have a spreadsheet of others, too, but those are the top contenders. If all else fails, my last resort is the Richmond Marathon, which they are having on a USATF course, but you can run it any time over a period of about two weeks. And you get an official time with your bib/chip. Greg is planning to run the Rehoboth Beach Marathon with Richmond as his backup.

As of now, Plan "C" is happening: The Harrisburg Marathon in PA. A few days ago, the race director announced that they had received approval from city officials to hold the race. They are altering the course, but they are submitting that course to USATF for official certification so it will be a Boston Qualifier. This same organization just successfully held a half marathon on this same course (it will be doubled for the full) last weekend, so there is no reason to believe they would cancel the marathon. COVID counts would have to go way up within the next seven weeks and the city officials would have to get cold feet. Neither of which is out of the question.

The state of PA just ruled it unconstitutional to shut down businesses. You could look at a race organization as a business (I don't know the legality of how this particular race is set up) but as long as safety measures are in place, it's unconstitutional to keep a business shut down. Remember, races and other events were initially canceled for the primary purpose of not overwhelming the hospitals. COVID counts were on the rise. We didn't have enough PPE for hospital workers. We knew very little about how the virus was transmitted. It made sense to cancel events and have everyone stay at home.

We are now in different place. Numbers are lower, the death rate is down, hospitals are not being overwhelmed, large outdoor gatherings have occurred without causing major outbreaks, and yet some government officials (like the ones in my county) are still making decisions based on circumstances from March/April. Why couldn't you hold a 300-person 5K that went off in waves of 30 people every 5 minutes? But you can have more than 30 people in a restaurant in closer proximity for longer? It doesn't make sense.

In any event, I am thankful that this Harrisburg Marathon has received government approval to take place and I am looking forward to getting back out there.

Training Update
Training has been going really well. Typically, the entire month of September is still very warm and humid with temperatures rarely falling below 60. But this past week has been unseasonably cool and I was able to log 69 miles while still feeling good. Here's a snapshot of the past few weeks: 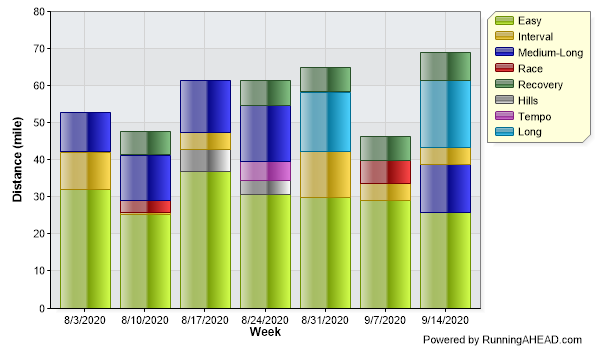 I would like to be above 70 miles per week for the remainder of the cycle, except for the week that a taper for and run a half marathon. As for long runs, I ran 18 miles yesterday and 16 miles two weeks ago (last weekend was the 10K race). I tend to believe that volume is more important than running a ton of 20-milers, but I will be running some 20-milers over the next month.

I've been strength training regularly with a coach over Zoom. We have a weekly 1-hour session which can be pretty intense, and then I do a lighter session on my own one other day per week. We focus on balance, alignment, core strength, hips and glutes. All of the exercises are compound exercises requiring balance, stability, and coordination. I think this strength training could bring me to the next level. I have been doing it since early May, but since the weather has been so hot, I don't really know how fast I've gotten. I can say that my legs do not tire as easy at the end of long runs and I feel like I have more power.

This whole COVID thing has me more motivated than ever to train really hard and "go the extra mile". You never know when you'll have the opportunity to race and when it will be taken away, so you'd better be as prepared as possible for the limited chances you get. If I actually get to race my marathon on November 8, I want to be able to say that I was really well prepared and that I absolutely crushed it. I always want to say that, of course, but it's more important if you realize you might not race a marathon again for a long time.

My goal is to run around 3:10. Of course I would like to squeak under that, but it's too soon to be able to tell if that is in the cards. It's more likely to happen if I wear the Nike Vaporfly, but considering I got injured from that shoe during my last marathon, I don't know if it's worth the risk. The most important thing is showing up to a live race and giving it everything I have.