A real, live half marathon!

Yesterday I ran the Hanover YMCA Runfest half marathon. Hanover is about two hours from my house, which means it's closer than most half marathons I run. I had heard about this race on Facebook. I was

looking to run a live half marathon this fall, before my full marathon, so the timing of this one worked out 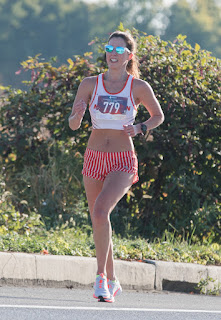 I knew in advance that the course would be hilly and challenging. It wouldn't be a PR attempt, but beggars can't be choosers when it comes to live races. You take what you can get. And in this case it was a race with twice the elevation gain of the Richmond half marathon, over 500 feet. Due to the elevation profile, my coach advised me to run this as a workout and therefore gave me less of a taper than I am used to.

Before the Race
Greg and I stayed at a hotel that was less than a mile from the start line. Packet Pickup was done via drive through. They had all the bags setup under a tent outside and you simply drove through like how you would do curbside pickup at a restaurant. It was quick and efficient and the goody bag had actual goodies in it, which most races had stopped doing years ago (a water bottle, nerf football, keychain, pack of mints, a pen).

We then decided to drive the course. When you are driving, hills don't look nearly as steep as when you are running. I thought to myself, this isn't all that bad! There were quite a few turns and you never ran straight for more than a mile. About 1.5 miles of the course was on a gravel path and we obviously were not able to drive on that to check it out. After the course preview, I thought to myself that maybe I could set a PR after all! The hills didn't seem that steep.

We had planned to eat dinner at the local Olive Garden, but due to the wait we opted for the Longhorn Steakhouse next door. I had salmon and rice (a common pre-race dinner for me). Greg had a steak.

I slept well the night before the race. The advantage of driving to a race vs. flying is that I get to bring my own pillow. The pillow makes all the difference and my pillow is a firm memory foam one.

I had been debating my shoe choice all week. The contenders were the Nike Vaporfly Next%, the adidas Adizero Adios, and the adidas SL20. With my Achilles being tender and this not being a PR course, I decided it wasn't worth the risk of using the Vaporfly Next%. So then it was down to the two adidas shoes. I ended up going with the SL20, a shoe that I had never raced in before. It's just a tad heavier than the Adios (which I wore at One City last spring) but it has more spring. I chose the SL20 because I wanted my legs to feel as peppy as possible.

Race morning was pretty straightforward. I had a bagel with peanut butter, went to the bathroom a million times and got dressed. 45 minutes before the start, I drank 3/4 of a serving of UCAN. Since vomiting post-half marathon has become a thing for me, I decided to back down on my UCAN serving size, but bring a caffeinated Maurten gel to take at mile 7.

We left the hotel at 7:30 and warmed up to the start line and then ran around the start area. It was 40 degrees and sunny. About 5 minutes before the start of the race we got into the corral with our masks on. The race organizers told us that we needed to wear masks while in the corral, but we could throw them off once we started running, and they would pick them up. I personally wouldn't want the job of picking up used masks, but maybe they had those trash picker-upper-stick things.

Weather Analysis
The start temperature was 40 degrees but that rose to 52 by the end. I wore shorts, a crop top, sunglasses and gloves. I was comfortable the whole time and never felt too warm or too cold. I tossed the gloves during mile 4. My app said 1 mph wind, but there were portions of the course that felt somewhat windy, maybe 8-10 mph which is just enough to be annoying. On my official race weather scale, I give this a 9 out of 10. In order to get a 10 we would have needed more cloud cover. I am obviously not complaining and frankly we lucked out for an October 3 race. Low 50s would have been more seasonable so we got abnormally cool weather.

Miles 1-4
The race started and everyone threw off their masks immediately. It felt awesome to be in a real, live race setting! I knew that the big hill would be the third mile with some elevation gain the the first two miles. I went out at a pace that I thought was rather conservative for a half marathon: 7:13. My PR pace is 6:55 and my pace from One City this past spring was 6:59. After the first mile, the crowd thinned out. Greg got ahead of me and I had him in my sights for the first 3 miles, but then I lost him.

I knew that the huge hill would happen during the 3rd mile, and it was even harder than expected. According to the elevation profile, we climbed 167 feet in just 1.3 miles (from 1.5 to 2.8). The big hill was immediately followed by a short downhill and then two 40-feet hills that only lasted 0.1 each, which means they were very steep. And then a quad-burning steep downhill. So by the time we reached mile marker 4, we had climbed a steep long hill and two steep short hills and then run a steep downhill.

On the downhill section, I managed to pass the woman who was leading me up the hills for most of the way. I'm an excellent downhill runner but I struggle to run up hills, so this is not uncommon for me. My hope was that she would not in turn pass me when the next hill arrived.

Miles 5-8
Now that the worst of the hills was over, I expected to get into a groove, hit a 7:00 pace and stay there for the rest of the race. My legs were not on board with this plan, though. Imagine running 250+ feet of

elevation in 2 miles at a hard effort and then running a 9-mile race. It's not going to go well unless you are a seasoned trail runner or you live in the mountains and that's your thing. But I still had hope and I was going to try for that 7:00 pace.

The course did get easier during these miles and I coasted. But as I said above, my legs were not having it and this section still had hills to contend with. Another challenge was the abundance of turns. Every time I felt like I might be hitting my stride and getting into a rhythm, a turn would come and maybe a strong breeze with it. I did not pass anyone during these miles and no one passed me. I had no idea how many women were ahead of me but I wanted to win the Master's award.

I had my gel 50 minutes into the race, but it didn't seem to give me any extra pep.

Miles 9-12
As you can see, miles 5-8 got progressively slower and I vowed to end the vicious cycle. Since the 8th mile had a lot of elevation gain, I knew that the coming miles had to be easier. I was right in the sense that we were coming to a downhill section, but any hopes of it being easier were squashed by the loose gravel surface. We ran on a gravel trail during miles 9 and 10. Shortly after getting onto the trail, I was passed by a guy who told me that I had been pacing him the whole race. Wow! That felt great to hear. Even when I was not having my best day I was still able to be steady enough to pace other runners. We exchanged a few words which made me realize I was not running at full effort. It was way too easy for me to gut out a sentence during the 9th mile of a half marathon.

He passed me but I vowed to keep him in my sights for the rest of the race. It would be helpful to have someone in front of me to follow because otherwise, I was simply following the arrows and the volunteers, which were not always 100% clear.

I was able to keep him in my sights all throughout the gravel, which was nice because the gravel path was full of twists and turns so it was good to see ahead of me what would happen. This gravel was not the firmly packed gravel of the Rehoboth Beach Marathon-- it was looser and harder to run fast on. I thought to myself "too bad the fast downhill section is all gravel" but then I realized that if it has been in uphill it would be far more painful, so I decided to be thankful for what I got!

Every time I thought the gravel was ending, it was just to cross a road and then get back on the gravel. We ended up spending nearly two full miles on the gravel and I was so happy to be done with it.

Just like at mile 5, I vowed to run the rest of the race at a really fast pace now that the gravel was done with. BUT. . . my legs would not cooperate and I could only squeak out a 7:30 pace. I saw Greg during the 12th mile at a turnaround and he looked so strong!

Mile 13 and the finish
At least I was steady. And I still had that guy in my sights. I did not feel like I was running full race effort until the final mile, and that's because I just didn't have it in my to give that kind of effort. I was able to pick up the pace for the last mile (7:13) and ran the uphill bit to the finish line at pace of 7:06. 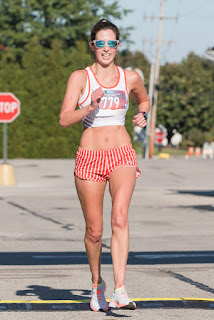 I was so happy to be done! My official time was 1:37:47.Shortly after crossing the woman who I had passed came up to me and told me I had been pacing her the whole race. I had no idea! And boy was she close behind too, finishing just 15 seconds after me. Greg finished in 1:30:20, which was very close to his PR.

It turns out that there was no Master's award, but I would have won it if there had been. Instead, I won my age group (40-49) and was awarded with a HUGE tin of UTZ snacks, individually wrapped. Greg won second place in his age group and won a tin of UTZ chips that was almost as large as mine. For those of you who don't know, Hanover is the home of UTZ.

I was the 4th overall female, and it felt good to place so highly. My coach had told me to focus more on my placement and less on my time, due to the nature of the course.

After the Race
Greg and I walked back to our hotel, which was no easy task carrying the huge bins of UTZ snacks. After showering, we drove to Gettysburg for lunch and then we visited a small zoo on the way home. The zoo had a safari ride where you got to see three zebras up close! We definitely made the most of the weekend.