I registered for the Marine Corps Marathon. While the naysayers are convinced that this race will ultimately be canceled, I remain optimistic. Here is the race director's stance:

"Many other large events have cancelled but our Marine instinct is to lean in and fight for the possibility of hosting a live marathon in Arlington, VA on October 25, 2020. This means a major overhaul of how the MCM looks and operates so social distancing considerations may be incorporated. In short, our working solution is to break the 45th MCM up into 24 waves that will start over an expanded window of time on event morning. This plan will necessitate a smaller field of in-person participants."

To reduce the field size, they have offered a virtual option, which is particularly attractive to those who would have to travel by air, and they have stated that you have to run a 12 minute mile or faster. They have not provided an update yet on the actual size of the new field, but they said they might have to reduce the time requirement even further if the field remains too large.

It sounds like they are doing everything in their power to take precautions so that the race can be held as planned. After all, they are the marines, and at some point a large race needs to set the precent for how they can be done safely. A vaccine is not a guarantee in 2020, 2021, or even longer. If race directors and government officials can't find a way to resume racing, then many races will go out of business.

I'm not a scientist, but we've had many mass outdoor gatherings over the past two months and none of them have been attributed to causing a spike or hotspot. Hotspots arose early in the pandemic from enclosed spaces, like that medical conference in Boston, nursing homes, and the Diamond Princess cruise ship. Once again, I am not a scientist, but I have done quite a bit of reading on this and I haven't seen any evidence of large outdoor mass gatherings causing a COVID 19 outbreak.

So even though many people think the Marine Corps Marathon will not happen, I choose to be optimistic. I'm also registered for Rehoboth Beach, which is about six weeks later. The race director recently emailed registrants telling us that it was too soon for them to know what would happen. As of now, they are still planning to proceed. I imagine we'll get more information in early fall.

My MCM History
Even though the MCM is my hometown marathon I have only run it once, back in 2006. It was my second marathon ever! I ran 4:24. I had a blast and I loved it so much. I ran the associated 10K in 2007 and 2012. The reason I haven't run the marathon again is because I have wanted to experience other fall races.

Plus, an October marathon requires long runs in August and that's not ideal with my heat sensitivity issues. But now that I have a treadmill, I think I can make it work. Lately I have been doing hybrid treadmill-outdoor runs. I run on the treadmill for 30-50 minutes and then immediately head outdoors for the remainder. Race day weather for MCM is hit-or-miss. It's been crappy the past few years but it had a streak of great weather the years before that. If it turns out to be too warm, I'll simply back off the pace and target Rehoboth Beach for a PR.

I'm also super excited about the charity I am raising money for. My donations website is currently broken, and once they fix it, I will announce what charity it is. It's an organization that I am passionate about supporting.

So, what's the plan?
July is an easy/recovery month and marathon training will officially begin in early August. Now is the perfect time to dial back the mileage and lay off the long workouts so I'm fresh when it's time to start the training cycle.

I have now done quite a few hybrid runs of treadmill/outdoor combo and it really works for me. The hotter it is, the longer I stay on the treadmill. If it's insanely hot then I simply do the whole thing on the treadmill. With the hybrid approach, I stay acclimated and reduce the risk of injury from 100% treadmill running. Having my own treadmill has been such a lifesaver!

Also, I should mention that I ended my running streak on Monday. I made it to 181 days. I think six months is a solid achievement and I could tell my body needed some rest days due to how high my heart rate was getting during easy runs. I only logged 31 miles this week, but I feel really good today, so the days off did their job. Now I just need to get through a few more weeks of very slow running in the heat and on the treadmill before I start training for Marine Corps! 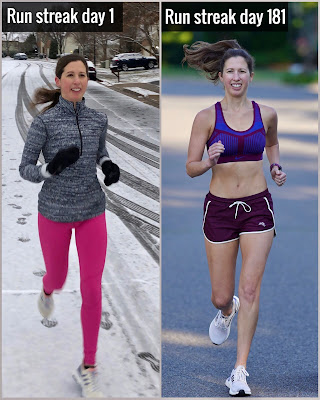