I ran my first LIVE race this morning since March 1st! All of the races I had been registered for after March 1st were canceled, but the Loudon Street Mile marked my return to real racing. The race had 193 finishers, and was run in six waves that were spaced apart by 10 minutes.

Background
This race typically occurs on Memorial Day, but they moved it July this year. I had heard really good things about it from fellow runners but I had never tried it. The race takes place in Winchester, VA, which is about an hour away from where I live. It was definitely worth spending two hours in the car to run a live event. In fact, one of the participants traveled all the way from North Carolina.

The race attracts a competitive field with top five females all finishing faster than 5:12. The master's winner ran 5:15. There is prize money for the top finishers, so it makes sense that the speedy runners would come out.

Having run 3 mile time trials on the track and the Virtual Indianapolis Monumental Mile also on the track, I was ready to take on a road race. I had never raced a mile on the road so I wasn't sure what I was in for. I knew to expect a hill for most of the first half, and I'd never run mile pace up a hill like that.

The race was originally scheduled to start at 8:00, but about two weeks ago, they pushed it back to 9:00. They wanted to allow more time for packet pickup. Originally, my wave (women under 7:00 pace) was scheduled to start at 8:00, but with the new plan, the fast men started first at 9:00 and then the fast women at 9:10. After that, the next fastest men and women combined, followed by the rest of the field. This meant Greg was in the 3rd wave, which started at 9:20.

Before the Race
I woke up naturally at 4:30, obviously excited about the race. I ate an English Muffin with peanut butter at 6:30 and we were out the door at 7:00. I had a dream last night that I forgot my race shoes. And what do you know, three minutes into the drive I realized. . . I had forgotten my race shoes. Thankfully we weren't too far from home and we didn't lose my time going back for them.

Speaking of race shoes, this is the first race ever that Greg has worn a lighter shoe! He's never raced in anything lighter than his daily trainers (Brooks Adrenaline and Mizuno Wave Inspire), but I convinced him to get a pair of the adidas SL20, which I had recently gotten and determined they were the perfect entry-level speed shoe. I wore the adidas Adios 4, which are lighter than the SL20 but have a nice spring to them. Also I should note that I much prefer the Adios 4 to the newer Adios 5 mile, which I find to be stiffer and less comfortable.

After our hour-long drive, we parked near the packet pickup, which was setup outside of a running store. There was only one other person picking up their packet at the same time as us. I know that packet pickup is a safety concern for many races, and one of the reasons they cancel. But if you allow runners to pick up their packets in advance and keep the field size small, and hold it outdoors, it's not an issue.

We then drove one mile to the start line so we'd have access to our cooler of ice beforehand. We parked, used the porta potties, and I took a caffeinated Maurten gel. I find that caffeine really helps in these short, hard efforts. Then we started our warm up. I saw a few friendly faces and it was so nice to be out in the community again! I noted that the course started on a downhill for the first 0.2 mile, and then was uphill to just after the halfway point. Then downhill, and then a flat finish through a brick-surfaced town center. No turns-- just a straight shot!

After the warm up, I put some ice in my sports bra and in the sides of my briefs. I poured water over my head. And then I did some strides before heading into the corral. It was 76 degrees with a "real feel" of 78. Humidity at 86%. Ouch. But thankfully it was only a mile. If this had been a 5K I would have deemed these conditions unsafe for me to go all out. Given my heat sensitive issues, I would have held back a little. But with (hopefully) less than 6 minutes of work, I figured my body could handle a full-out effort regardless of the heat.

My goal was sub-6:00. That doesn't seem very lofty given that my PR on the track is 5:52. But this race had a hill and I wasn't sure if asphalt, followed by brick, would be as fast as the track surface. Plus, when I ran the 5:52 it was only 55 degrees and not humid. My strategy was simply to run as hard as possible and see if I could squeak under 6 minutes.

The Race!
The gun went off. There were about 35-40 runners in my wave, all female. It's very rare that I am running with all women so this was a novel experience. Most of the runners flew out of the gate at lightening speed, but I held back a little bit. According to my Garmin data, I ran the 0.2 downhill at a pace of around 5:40, but as soon as the up hill started, I slowed to around 6:30.

As I was running, I tried not to look at my Garmin too much. But I did notice that whenever I did my average race pace kept slowing down. I think that by 0.4 I had averaged 6:13. Yikes! Sub 6:00 was not at all looking good.

Note: I uploaded my raw Garmin data to Strava to analyze my race, since Garmin is down.

We kept climbing the hill and as we approached the top, I started to pass other runners. Someone called out a time of 3:03 for the first half, which put me on track for 6:06. And then I just started tearing through the field. I sped up dramatically on the downhill and I felt like I was flying. I was passing people left and right. Here are some Garmin data points for "current pace": 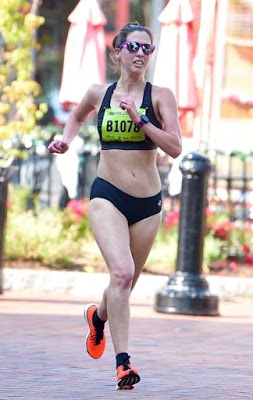 I could see the finish line and even though I was totally red lining and making all kinds of noises, I just pushed and pushed and pushed. It was hard, it hurt, and it felt amazing! I love that kind of pain that you only get as you approach a race finish line. This cannot be replicated in a virtual race when there is no finish line or people cheering for you, or other competitors.

For those of you who doubt Garmin accuracy, I had my auto lap set to one mile. My Garmin auto-lapped at exactly 5:57.6 which is the same as my official time. Without weaving and turning, GPS devices are highly accurate!

After the Race
It took me about two minutes to feel normal again after the race, but once I did I was so happy. I briefly chatted with some other runners before walking back a little ways to see Greg finish. Greg looked really strong and it was so cool to be able to cheer for him. He clocked in a 5:41.4. This was his second fastest mile.

Once he recovered, we chatted for a little bit and watched other runners come in. And then we jogged back to our car near the start line. There was no awards ceremony to prevent people from gathering together, but they will mail the awards.

I ended up winning first place in my age group, 40-44. I did not win the Master's Race, which was won in 5:15 by a 45-year old woman. For those of you unfamiliar with how age group awards work, if you win the Masters race (age 40+), you are not eligible for an age group award. This is how I was able to win my age group. My award will be mailed to me. We then drove an hour home, both very pleased with how the morning went.

Final Thoughts and Key Takeaways
I'm really happy with how well I ran. I did not expect to beat my 5:52 track PR, which was on a flat surface in cooler weather. That said, I wish I had gone out faster. I have said this about every one of the mile time trials I have run. I don't think it's a matter of needing time to get the legs going; I think
it's a confidence thing. The "start slow, finish fast" mentality has always served me well, which makes me fearful of gunning it early in the race. Even though the first half was uphill, I still think splits of 3:03, 2:54 indicate that I could have run a faster overall time if I had started quicker.

I wish I could try running this course again next weekend! Unfortunately I will have to wait until Memorial Day 2021. I love the idea of racing a mile in the summer because I don't have to restrain myself for fear of passing out or getting sick. The fact that I had ice in my sports bra and that I poured cold water into my hair beforehand really helped, too. Next year I will target closer to 5:50!

I cannot stress enough how amazing it felt to be out on the race course again. This experience confirmed how much I love racing and how badly I want races to come back. The race director set an excellent example of how a race can be put on safely in the midst of COVID, and hopefully set a precedent for road races occurring in Virginia.