This morning I ran the Pike's Peek 10K in Maryland. This is one of the larger and more competitive 10Ks in the Washington DC Metro area, but I had never run it. Approximately 2,500 runners 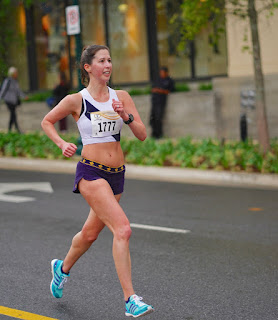 I had always been turned off by the fact that this race was net downhill, and didn't think it was a "fair" course. Most people who had run Pike's Peek set PRs there due to the downhill profile. However, in recent years they changed the course so that it now starts uphill and the final mile is also net uphill (whereas it use to be a steep downhill). Looking at Strava data and reading race reports, I determined that the newer course was "fair" and I should go check it out.

Note: the course is still net downhill, but there are more uphills now to make up for it. Instead of a Revel race, think Boston or CIM.

Before the Race
The week leading up to the race did not start off well. For whatever reason, I was having trouble sleeping and I only got 5 hours of sleep both Monday and Tuesday night. I attempted to run a track workout on Wednesday, but I was so tired and it was 69 degrees, so I bagged it after only doing half of the reps. I think it was the right decision given how I felt and the fact that I wasn't even running close to my target pace.

But things started to turn around once my body remembered how to sleep. On Friday night, I had one of the best nights of sleep ever! I was super exhausted after work and I went to bed 7:15, but slept until almost 5:00. I also slept pretty well last night. Given that, I was optimistic about the race.

In general, I had a good feeling about the race. The weather was looking okay, although not ideal. But I figured the net downhill course profile would counteract any slowness caused by the temperature being above 50 degrees!

Greg didn't run this race so he played the role of race photographer. We left the house at 6:00am and
arrived at the start at around 6:45. The race start was scheduled for a 7:50 start time. Packet pickup went smoothly with no lines, and the race had plenty of porta potties. I drank my UCAN and started my warm up. Since this race is point-to-point, Greg drove to the finish line to take photos.

After finishing the warm up, I got into the corral with about 5 minutes to go before the race start. As we all waited at the start line, it began to rain. I was thankful for the rain because it would help cool me down. Since it was humid out, I figured it might as well be raining. I also noticed that my stomach was vibrating. It felt okay, and I had gone to the bathroom many times that morning. But for some reason, it was not happy.

The announcer told us that the police had not cleared the course yet, so there would be a delay. I figured it wouldn't be more than a minute or so, given that this race is very well organized, and has been going for over 20 years. But we waited, and waited, and waited some more. I was simultaneously worried about being both too warm and too cold! Too warm because the temperature would quickly rise between 8:00-9:00am, and too cold because I had warmed up so long ago, and was now getting rained on. I know- I'm such a Goldilocks! I realized the situation was not within my control, so I needed to just accept it and wait.

Miles 1-2
The race starts on a steep uphill. I had lined up all the way to the left because I thought we made a left turn at the top of the hill, but it ended up being a right turn. So I basically ran a diagonal line up the hill. It was steep and crowded so I just relaxed and figured that once I got to the top I could gun it.  But then the road was narrow and it was still crowded so I couldn't run as fast as I wanted. I told myself to be patient and not worry about my pace for the first mile. I ended up running a 7:02.

Of course then I thought back to Cherry Blossom, when my first mile was 6:50. Not a good thought! But I knew the rest of the course would be net downhill, so there was plenty of time to make up for it. I thought the best approach would be to not look at my Garmin. I typically fly down hills and I didn't want my Garmin pace to freak me out. I decided I run by effort and just feel my way though the course. During the second mile, I was able to pass quite a few people and make my way closer to the front of the pack. My second mile was 6:30. I saw this and didn't flinch and was optimistic about what the rest of the race would hold. 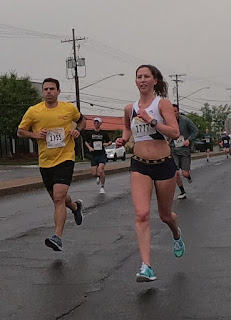 The race started to get hard somewhere around mile 2.5. I had basically been cruising up until that point and now it really felt like work. Which was good- but also hard! I passed a few more people during these miles and nobody was passing me, which felt great. I tried to use the competition to my advantage, focusing on passing people and pushing hard. I ran 6:41 and 6:44. I didn't want to think too much about my average pace or my PR potential. I just wanted to focus on pushing and running to the best of my ability. I wasn't feeling great, but I was feeling ok.

Miles 5-6
I was very pleasantly surprised to see my friend Anna handing out water during the 5th mile. It really perked me up as I was hurting a lot at that point. I was trying to fly down the hills as fast as possible, but that made the up-hills feel twice as hard, so I just tried to maintain the effort level there. I was closing the gap on a woman ahead of me, and I thought I was going to do it, but she got a second wind in the last half mile, just as I was getting close. I knew from studying the elevation profile that mile 6 would be slightly net uphill and that I would have to really push hard to not slow down. Mile 5 was 6:45, and mile 6 was 6:55.

The last 0.2
I started looking around for Greg before making the final turn, but I didn't see him. After turning, however, I saw him. I didn't have much left in me at that point, but I ran as hard as I could into the finish, at a pace of 6:26, which is kind of disappointing. Usually with just 0.2 to go I can kick it under 6:00 pace, but that didn't happen today. 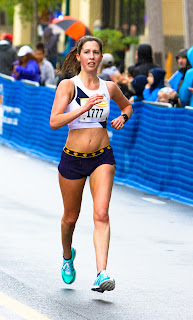 I crossed the finish line, relieved to be done with the race, in a time of 42:20.

My sports psychologist taught me to find the joy and happiness in every race, no matter what. But my first reaction was a big fat MEH. Not horrible: I didn't bonk like I did at my previous 10K. But not great: I was 29 seconds off my PR when I considered myself to be in shape for 30 seconds faster than my PR.

After the race
I was pleasantly surprised to see my friend Meredith at the finish line. And she told me she ran with our friend Kathy. I hadn't seen either of them at the start. It would have been nice to have them to talk to during that long wait. And also, Meredith and I currently running similar times, so it would have been good to run near her.

Greg, Kathy, Meredith and I ended up going to the Starbucks at the finish line. I didn't cool down because I prioritized hanging out with my friends. And I'm fine with that! Meredith had run this course several times in the past and said that she didn't think it was as fast this year as it had been in the past. Her PR is on this course and she wasn't entirely pleased with her finish time today either. At least there was someone else in the same boat as me! If all the other runners had been saying "perfect weather, super fast course, I got a PR" I would have felt worse about my situation.

I was surprised that I didn't walk away with an age group award, but I guess this race is very competitive.

Reflections
I'll start with the positives:

There are a number of reasons why I didn't run this race as fast as I expected and hoped. It's probably a combination of these:
No matter what the reason, I am now super motivated to train harder and get faster. So even if I am having an off day, my fitness can compensate for that. The bad news-- it will soon be time for me to back off training! I can't exactly chase that goal until September. I'm hungry and eager to work hard NOW, but my body needs an off season, which will pay off in the long run. Just like you have to run slower to run faster, you need to take breaks to make breakthroughs.