As the title of this post indicates, I had a good morning at my 4th consecutive Semper Fi 5K. Unfortunately, this race will not be put on in future years, so it was also my last. Here's some history:

I didn't have a lot of confidence going into this race. Even though I have been running well on cool, non-humid days, the humidity has been killing me on other days. I ran 19 miles last Saturday in very 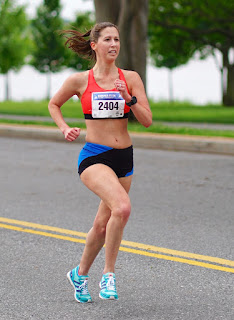 humid conditions, and it resulted in me feeling completely drained for the next three days. I had to take off work on Monday because I felt so tired.

I did not run at all on Monday, ran a very easy 4 miles on Tuesday, and was feeling better again by Wednesday for 8 miles. But after that, it was time to taper down for the 5K. Suffice it to say, I went into this race very well rested and recovered. I got plenty of sleep this week and did not run very much.

Yesterday morning, I was still unsure of how I would approach the race. I was seriously paranoid of getting sick again by over-doing it in the humidity. But, the forecast was calling for 75% humidity, which isn't that bad. My coach suggested that I race it full out and see what I could do. So I told myself, okay, go ahead and race it!

Before the Race
I woke up at around 5:00, had my usual bagel and peanut butter and headed out the door with Greg at 7:00. Greg did not run this race because he's resting up for a marathon next weekend. (I'm running the same marathon, but wanted to do the 5K anyway. More on that later!)

Our plan was to meet up with Cheryl at 7:45 at the start line, but fortuitously she ended up driving directly behind us on the highway! She followed us to the parking lot, where we prepared for the race. The parking lot is almost a mile away from the start line, so we jogged there for our warm up, and I drank my Generation UCAN along the way. At the start line, we met up with some other friends and then continued the warm up. All in all, I warmed up for 2.5 miles. Then, I did some drills: high knees and B skips. As I was doing the drills, I told myself that while I was running, I needed to focus on quick turnover and pushing forward.

At the start line, I started to size up the competition. In 2017 and 2018, I was third place female. This year, it looked like it would be hard to keep that title. It seemed like a lot of fast women were lined up near the front. In particular, a woman named Kimi, who I met a few months ago, who I knew was running 5Ks really fast right now. I didn't have a goal time in mind, but I wanted to push myself hard, and I figured I would be happy with anything in the low 6:30's for a pace. It ended up being 64 degrees with higher than forecast humidity, so I thought a PR (sub-19:58) would be unlikely. Plus, the sun was coming out and warming things up. That wasn't supposed to happen!

Mile 1: 6:31
The race started and I started to recite a mantra immediately: Relax and push forward. I hadn't
planned on using this mantra, but during my warm-up drills, the idea of pushing forward really struck a chord with me. So I recited it over, and over, and over again. Kimi was about 5 seconds ahead of me, and I wasn't surprised. She had recently set a few 5K PRs so she was a fast one!

I learned from the Pike's Peek 10K last month that I definitely DO want to monitor the Garmin. In fact, when I do my training runs, I sometimes speed up during the last 0.1 of each mile, just to get that mile split down to "look" better on paper and give me confidence. I saw my friend Allison cheering for me, and that really pepped me up.

At 0.9 into the race, I told myself to push a little harder to get that first mile split down. Doing this allowed me to catch up with Kimi, so that at mile marker 1, we were right next to each other. My Garmin beeped 6:31 which I was thrilled with, because up until that point, my average pace had been around 6:35. My strategy worked.

Mile 2: 6:37
I passed Kimi and continued to tell myself, relax and push forward. It was hard, but I felt strong and I felt like I still had a lot to give. I told myself to just get to the turnaround running strong and then the way back would be mentally easier.

At the turnaround, I was able to see that two women were ahead of me. The first one was way ahead of me. There would be no catching her. The second one was about 10 seconds ahead of me, wearing a long-sleeved shirt. I don't know how people can race in long sleeves when it's 64 degrees out. I figured I might be able to catch her, but I wasn't going to make a move quite yet. She was still a good bit ahead of me, and I'd have to speed up a lot.

This mile was fun because a few of my co-workers were running the race, and they all cheered me on from the other side of the course as they were running out. I also saw Allison again shortly before mile marker 2.

Once again, at 1.9 miles, I told myself to push a bit harder to get the split time down, and it worked: 6:37. Previously, I had been around 6:40. Mile 2 is always the slowest mile of this race, so I wasn't worried that it was slower than the first mile. Particularly since I still felt good.

Mile 3: 6:30
This last mile is when it started to get really, really hard! I kept repeating the mantra: relax and push forward. Every time a negative thought would creep into my head, I replaced it with the mantra. Racing is much more fun when you have a mantra instead of visualizing yourself stopping! Of course
the urge to stop is strong in every race because I am always pushing hard and hurting.

With about half a mile to go, I realized I was closing the gap on the woman with the long-sleeves. I didn't want to surge too soon, so I told myself to simply stay strong because I was closing the gap at my current pace. With 0.3 to go, I was still uncertain if I was going to be able to pass her. With 0.2 to go, I made my move. I sprinted as hard as I possibly could. I told myself I could slow down later if I had to but as I passed, I wanted to do it so quickly that she would not try to come with me. And it worked. I passed her right before mile marker 3 and she didn't attempt to follow.

I was soooo happy to have finished second! And my time was faster than expected too! I saw Kimi come through and then I met up with Greg to watch Cheryl and Kristin come through. I also met up with a few co-workers, as I was officially part of my company's team. Then we cooled down for just over a mile before the awards ceremony.

Final Thoughts and Stats
If you read my Pike's Peek report, I listed a few things that I learned that I wanted to improve upon for next time. And thankfully, I took those learnings to heart and ended up running a race I was happy with today:

Using the McMillan calculator, this 20:21 is almost the equivalent of the 42:20 10K I ran at Pike's Peek. But, Pike's Peek was 7 degrees cooler and the course was net downhill. And I didn't feel like I ever truly dialed into race mode at the 10K. Today, I was "on" and I had the fire!

Up Next
I'm running the Sugarloaf Marathon next weekend! I originally registered for it last October as my goal race for the spring, but then I pivoted to Shamrock. So it's not my goal race, but I am going to race it and see what I can do. Right now, the forecast shows the race being 57 degrees and sunny by the end (which is why it wasn't my goal race) but hopefully it gets cooler between now and next Sunday.