I haven't blogged about my racing plans for the rest of the spring, but I do have them! With only 4-6 weeks of potentially cool mornings left, my coach and I decided I should sign up for some shorter races. Today, April 20, had the potential to be cool given that it's still early spring. So I had registered for a 5K. But alas, it was 67 degrees and humid as hell.

A few weeks ago, I registered for the BEST Kids 5K-- a race that two of my friends were running. This is a small race that I have won in the past on a very fast course. As the race approached, the 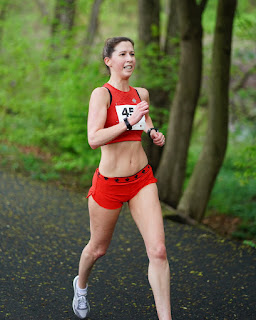 forecast started to look worse and worse. On Thursday I determined that it would be too warm and humid to race it at full effort, given my immune system issues. I have struggled with a mono-like virus for 3 out of the past 6 summers and I am almost positive the virus comes on as a reaction to racing in the heat. So I made the decision to run it as a tempo run, and I figured I still could potentially win the race at that.

Which race to run?
The evening before the race, my friends and I realized that the course was flooded. There had been no word from the race director about cancelling the race, but it seemed suspect. One of the two friends, Cheryl, decided to sign up for the PVTC Easter Classic 5K, just 10 minutes away from the original race. So, I followed suit and registered for it too. This race does not offer on-site registration, so we needed to sign up the night before. The other friend, Allison, decided to stick with the BEST Kids race no matter what. She said she would come cheer for us if it was cancelled.

When I woke up this morning and checked my weather app, there was a flood warning for the exact area of the course. It sounded like the course would not be run-able based on the description in the warning. But yet, we hadn't gotten a cancellation email from the BEST Kids race director. So, about 90 minutes before the race start, we finally decided to run the PVTC Easter Classic. We would meet up with Allison for brunch afterwards.

Before the race
Once Cheryl and I settled on PVTC via text message, Greg and I drove down to Arlington. Greg would not be running the race, but cheering and taking photos. Once we arrived, we found Cheryl and began the warm up. Cheryl, Allison, and I all had the exact same running outfits so we all matched. It was too bad Allison wasn't there, but Cheryl and I represented the red shorts with rabbits along the waistband. Perfect for easter!

These PVTC races are small and not chip-timed, but sometimes they can be competitive. I thought I could still potentially win, but I obviously wasn't sure. This was a crowd of "runners" who run races often, whereas the other race was a charity event that was most participants' only race of the year. I decided I would still try to win, unless some woman or women went speeding ahead of me at the beginning.

We warmed up on the course, which was the W&OD trail. I was familiar with it, as I had run this portion of the trail before work one morning back in January. On that day, the roads near my house were covered in snow and ice, but just 15 miles closer to the city, on this section of the trail, it was clear for running.

My hope was that I could win, run under 21:35, and get negative splits all while running no harder than tempo effort, to protect my fragile immune system.

Mile 1: 7:02
The race started and I decided to ease into it. I ran right next to Cheryl so that Greg would be able to snap photos of us in the same shot. He was standing about 1/4 mile past the start line. Once we passed Greg, I turned on the gas a little bit. I knew that the first half of the race was net uphill and the second half was net downhill. I wanted to conserve my energy for the second half so I could run a negative split and feel good running faster. This is not my normal 5K approach as I typically go out hard.

Mile 2: 6:55
After the first mile, I was already feeling the impact of the humidity. I felt suffocated and like I wasn't breathing clean air. I guess allergies are really bad right now, too, with several types of pollen and ragweed out. And we were running on trail surrounded by trees. At the turnaround, I saw that Cheryl was in second place and nobody was tailing me closely, so I continued to run conservatively. It was mentally a relief to be heading back toward the finish, knowing the second half was mostly downhill.

Mile 3: 6:50
My original plan was to really gun it and try to be around 6:40 or faster, but as I was doing it, I saw no need! I was working hard, I was winning, and I was by no means "comfortable". I was running solid tempo effort so I knew this workout would help in future races.

Last bit: 6:17 pace
As I approached Greg and the finish line, I sprinted in with a big smile on my face. 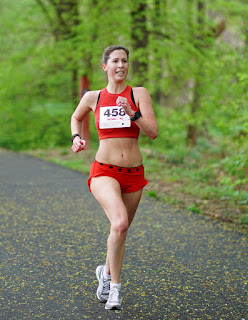 I watched as Cheryl finished in second place, looking really strong! After we recovered, we cooled down for about a mile and a half.

My official time was 21:33, so I officially met all my goals. The good news is that this race felt much better than New Year's Day-- although I was on the verge of getting sick on New Year's and I started out much faster there. My award was a chocolate Easter bunny!

After Cheryl and I gathered our awards, we (plus Greg) met up with Allison for brunch. We celebrated with mimosas, like we usually do. Allison ended up winning her race, and we were thrilled for her!

Next weekend I will be running the MUCH more competitive Pike's Peek 10K. At this point, I am going to try and run a PR because the weather is looking decent (mid 50s). My 10K PR is my oldest PR and I think I can beat it if the weather is favorable. I'll take on the 5K distance again in May! 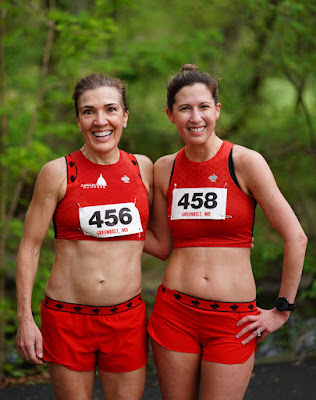