The trail run in Ketchikan, Alaska was the last official event of the Great Alaskan Running Cruise. The cruise ship was "at sea" the following day (Thursday) with no stops or excursions.

The cruise winds down
Just as these running events were winding down, my body decided it was a good time to get sick. It all started with a mild sore throat on Tuesday evening but after finishing the trail run and getting back onto the ship, I began to experience all the traditional cold symptoms: cough, sore throat, pressure behind the ears, and waves of being hot or cold. Thankfully, the ship had a medical station which was well stocked with cold meds.

Because of my previous experiences with mono, I take illness seriously and I'm very careful not to overdo it. I assume I got sick because of the time zone change, lack of sleep, being on an airplane, the movement of the ship, and participating in several strenuous running events. Taking Thursday off was a no-brainer, especially since it would have meant running around the cruise ship deck again, which wasn't exactly the most fun thing in the world. My marathon isn't until November, so I'd rather take a little bit of time off now than regret it down the line.

This running cruise was an incredible experience. I would highly recommend it to anyone who enjoys running, traveling, and meeting new people. Everything was extremely well organized by our hosts Jenny Hadfield and John "The Penguin" Bingham. There were no surprises and we knew exactly what to expect. Greg and I really enjoyed meeting other runners from around the world. Most people were from the U.S. and Canada and had run numerous races all over the country.

The cruise ship, named The Radiance of the Seas, is one of the older Royal Caribbean boats, and while it was nice, it didn't impress me nearly as much as the ship from our 2010 Royal Caribbean cruise, or the Viking River cruise. The food was mediocre, which kept us from overeating, but the room was relatively comfortable, given its small size. For a trip like this, the cruise ship's main purpose is transportation, lodging, a viewpoint for the Alaskan scenery.

So what did we do on Thursday with no port stops? Jenny Hadfield invited me to be a guest on her podcast! She had her equipment with her, so we found a quiet area of the ship and recorded it. We mainly talked about my book and all the struggles I went through to qualify for Boston. After the podcast was over, we chatted for awhile longer about running, careers, and life in general. I really connected with her and it seemed like we had a lot in common. The podcast should be live within the next week or so.

Vancouver
The ship arrived in Vancouver, British Columbia early Friday morning. Greg and I made our way to our downtown hotel and checked in. Our hotel suite felt like a mansion in comparison to our ship stateroom. Physically I felt better than I had on Thursday, but I was still coughing, experiencing bouts of hot and cold, and my nose was running more than I usually do! Once again, it was a no-brainer to take another day off from running. I was thankful that the illness held off until all of the official events were complete, and now it was time to focus on enjoying Vancouver and relaxing.

The weather was ideal for walking around: 70 degrees and sunny with no humidity. One of the best things about this vacation was being able to escape the Washington, DC heat and humidity in late July. We walked from our hotel to Granville Island, which earned me about 12,000 steps on my FitBit. I love exploring new places, especially when the weather is nice and there are so many beautiful and interesting things to see.

We had lunch there and walked around the Granville Island Public Market, which is a massive food hall filled with fresh foods. The fruits and vegetables looked incredible, but of course we ended up with the fresh doughnuts! We took a cab back to our hotel and spent the rest of the afternoon relaxing and napping until it was time for dinner. We had dinner at the Water St. Cafe, and the seafood was unlike anything we typically get back home. I had a halibut dish, and Greg had sockeye salmon.

Stanley Park Running
Our flight on Saturday wasn't until 12:45 in the afternoon, so we had time to run through Stanley Park. I had a two-hour long run on the schedule, but I still wasn't feeling all that great. That said, there was no way I was missing out on this run. I had heard amazing things about running in Vancouver and it was one of the things I had been most looking forward to. I decided I would go out and see how it felt. If I felt horrible, I could always turn around and come back. I figured that two full hours was probably not realistic, but hopefully I could manage at least 5-6 miles.

We had to take a five-minute walk through the city to get to the water where the path started. One of the coolest things about running in Stanley park is that there is a dedicated path for runners and walkers, and a separate path for bikers. And no cars allowed!

When we started, it was about 58 degrees and sunny. I can't even describe the views, so I'll let the photos do the talking: 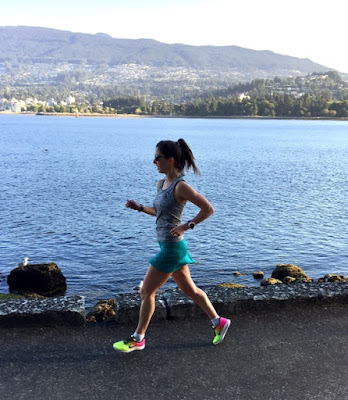 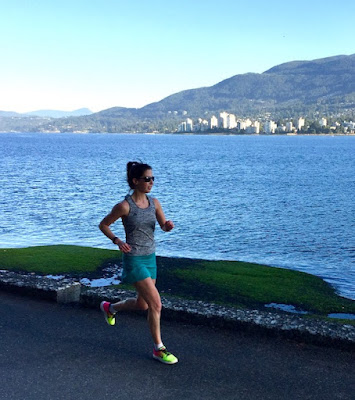 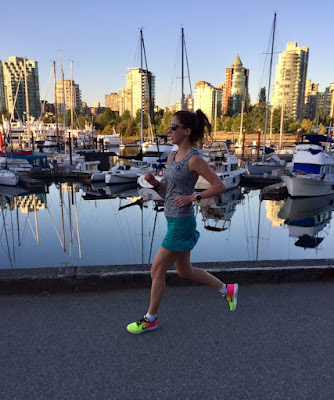 This run was amazing and I was thankful to be healthy enough to enjoy it. I didn't enjoy it as much as I would have if I hadn't been sick, but you take what you can get. We decided to turn around after 4.5 miles, making it a 9-mile run. I figured that was plenty long, and we were able to see over half of the park. We kept the pace easy and stopped several times to take photos and videos.

After we finished, it was time for the long journey home. We had a direct flight and we were back in our house by 9:30pm eastern time.

Today I am feeling pretty good except for some pressure behind my ears and some mild dizziness. Greg is also feeling dizzy, and we think it could have something to do with the flight and time zone change. I was able to get out for 6.5 miles this morning, and it felt decent. I ended up logging 31.8 miles this week, which is really low for me. But given that I was sick and on vacation, it's actually a decent amount. Hopefully I'll wake up feeling 100% tomorrow morning and ready to resume normal training and life!

For more information about the Great Alaskan Running Cruise and other running cruises visit www.runningcruise.com.