Alaska Half Marathon: A Run to Remember

The Great Alaskan Running Cruise has officially set sail! This vacation has been amazing in so many ways. 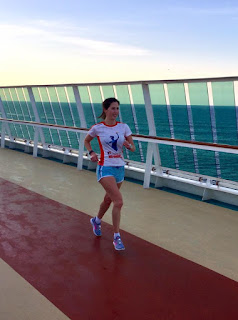 On Saturday, the ship was at sea all day long. I woke up feeling dizzy and I realized that the boat was rocking quite a bit-- more so than previous cruise ships I had been on. Nonetheless, Greg and I started off the day by running on the ship's deck. The ship has a running/walking track with 6.3 laps equaling one mile. My coach had prescribed a 45-minute easy run, so that's what we did. The boat was noticeably moving the entire time and it was not easy to adjust to. In fact, my Garmin logged over 1,000 feet of elevation change! It was a beautiful morning and we were able to watch the sunrise, and so the awkwardness was worth it.

Because our bodies were still on east coast time, we were up bright an early and running before 5:00am. As it got later, several people from our running cruise group joined in. Of course there was always the treadmill option, but I try to avoid those if possible.

After our run, we attended a race briefing and talk from the race organizers. This running cruise is put on by John Bingham, aka "The Penguin," who was a columnist for Runner's World and his wife, Jenny Hadfield, who also writes for Runner's World and has her own podcast. Jenny Hadfield gave a course preview along with some general tips for racing well and staying mentally strong.  John Bingham gave a humorous talk about the running boom and the rise of "back of the pack" runners. Both talks were fantastic.

The Hubbard Glacier
The highlight of the day was viewing the Hubbard glacier. The landscape was unreal! We spent nearly two hours looking out at the glacier and the surrounding scenery. It was unlike anything I had ever seen before, and is a contender for the most beautiful landscape I've ever seen.

We lucked out and had a perfectly clear day for viewing, which apparently is rare. I guess this makes up for when Greg and I went up into the Swiss alps and it was so cloudy that we couldn't see a thing. Words can't do it justice, so here are a few photos: 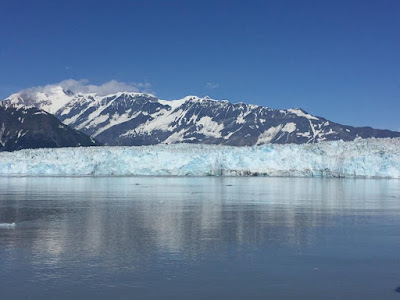 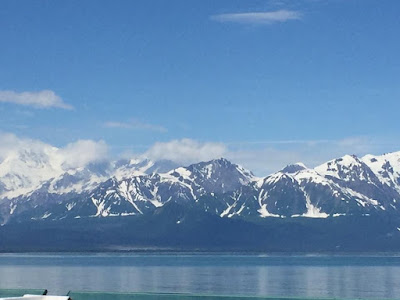 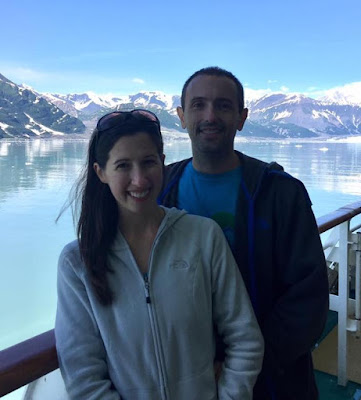 The Glacier Half Marathon: Race Morning
The next morning, our running cruise group ran a half marathon in Juneau. There was also a 5K option, but most people did the half. We had a special breakfast set up for our group which included anything a runner could possibly want pre-race. I had my go-to bagel with peanut butter and banana with peanut butter.

The race directors told us how the day would unfold, including calling out the two runners, male and female, who were expected win the race. Both of them were on cross country teams, and the female had just graduated high school. They also called out the people who were completing their 50th state of the 50 States Half Marathon challenge. And finally, they recognized a woman who was running her 100th half marathon.

The ship docked at 8:45 and we immediately got off of it and onto four busses. It was a 20-minute bus ride out to the race start. The race would be held on a highway that was open to traffic, but that wouldn't have many cars. The course was an out-and-back twice, with one substantial hill. The hill was just over a 100 ft climb and we would run over it four times (out, back, out, back). Upon arrival, Greg and I drank our UCAN, which would be our only fuel for the race.

The race was hosted by the local high school's cross country team, and the only participants were those in our running cruise group-- it was not open for public registration. The cross country team did an excellent job with their aid stations and their cheering. They were very excited to be hosting us. The weather was close to ideal: upper 50's, overcast, and 100% humidity. Apparently it rains most of the time in Juneau in July, so we lucked out with no rain.

My coach advised me to run this at my goal marathon pace for the fall to see how it felt. I have no idea what that will be, but I put a 7:25 pace out there, which would probably be the best case scenario. My PR pace is 7:41, so I don't think it's unrealistic to try and shave about 15 seconds per mile off of that. But once again, this is just an estimate since the race is still over three months out-- it will really depend on how training goes.

My strategy was to run the race as a progression run. Without a warm up, I knew it would be hard to hit a 7:25 pace right out of the gate. I also didn't know how I would feel given the time zone change, my lack of sleep, and my body's reaction to the boat's movement. I also thought it would be nice to pass other runners instead of having them pass me. Greg was on board with this approach, and we planned to run together, at least through mile 10.

Miles 1-5
The race started and the two young cross country runners took off at lightening speed, immediately creating a wide gap between themselves and the rest of us. I was not in any hurry to be running fast,
and I considered mile 1 to be our warmup. We were passed by two women and about five men within the first three minutes. I made a note of it, as a progression-style race usually leads to passing other runners in the later miles. I had three targets to motivate me, but my main objective was to stick to my pacing strategy.

We reached the first hill toward the end of the first mile. Based on my Strava data, it was just over a 100ft and it was about 2/3 of a mile long. It was a longer hill than I am used to running, but I was able to handle it just fine. The water and the glacier were to our left. Greg was capturing everything by wearing his GoPro on his head. It was such a peaceful race with only 150 participants and just the three aid stations. Everyone was having a blast and cheering for everyone else.

Miles 6-9
During the sixth mile, we picked off the first of three women. We had already picked off one or two of the men during the first five miles. The hill in mile 6 seemed much more difficult than it did on the way out and it seemed to go on forever. I had to really increase my effort but I knew I'd be able to recover once we got over it.

We then ran down the hill and it wasn't long before we had completed the first out-and-back and were at the turnaround. I could tell that the gap between us and the cross country girl had shrunk, but she still had a solid lead, probably by about 3 minutes. We passed the woman who was in second place while going back up the hill during mile 8. I was feeling strong. Our pace felt easier than a tempo run, but at this point, a little bit harder than marathon pace. Which was to be expected, as this marathon goal pace probably won't feel like marathon pace until a few weeks out from the race.

Greg and I were having the time of our lives. The scenery was gorgeous, the other runners were spirited and the 58 degree temperature felt amazing in comparison to what we've been training in for the past two months.

Miles 10-Finish
As we approached the turnaround, I realized that this course would end up being longer than 13.1 miles. I actually didn't care because this was a training run for me, and Greg noted that it would actually work in my favor because it would give me more time to close the gap with the cross country runner.  At this point, she was maybe 1-2 minutes ahead of us.

Once we turned around, I could tell Greg had a lot of energy left to give so I told him to go ahead. I wanted him to try and pass at least one of the men that was ahead of us, and I actually prefer to run alone when putting out a hard effort. It's almost like I need privacy because I am so focused and I don't want anyone "breathing down my neck" so to speak.

Based on how quickly I seemed to be closing the gap with the cross country girl, I thought I could catch her by simply sticking to my race plan. Greg caught up to her and she asked "where's that girl" and Greg replied "she's coming!" This made her surge, so catching up to her wouldn't be as straightforward as I expected.

The final hill came and I really powered up it, giving it everything I had, putting only about 20 seconds between the girl and me. Greg had already passed her. The runners who were coming in the opposite direction kept telling me to catch her! They were telling her that I was close behind, which probably motivated her to kick it up a notch as well.

I consider myself to be a strong downhill runner, so I surged down the hill, making the gap tighter and tighter. As we approached the finish line I was almost nipping at her heels. I crossed just a few seconds after her, and we high-fived it.

After the Race
I reunited with Greg and we chatted with the local cross country team for a bit. The runners who had completed the 5K were cheering everyone in, and it was exciting to watch the finishers. We then boarded the bus which took us back to our cruise ship. We spent the rest of the day exploring Juneau and visiting the Mendenhall Glacier. More on that to come in the next blog post.

All in all, this was one of the best race experiences ever. I had fun, I saw gorgeous scenery, I connected with other runners, and I got a good workout in. I'd be lying if I said I wasn't a little bummed about not catching that girl, but at the same time, that really wasn't my primary goal. My average pace was 7:27, which is pretty much on target considering Indy Monumental is flat and this race was hilly. I haven't seen any official results yet, but I was 1:42:02 for 13.67 miles according to my Garmin. I ran the first half an an average pace of 7:40, and the second half at an average pace of 7:16.

From a training perspective, I think I already have a solid speed and endurance base from which to build. I just need to survive the August heat and humidity and I'll be ready to go for the fall racing season. Today my legs feel mostly recovered and ready for the next running adventure in Skagway.