Greg and I flew across the country from Virginia to Alaska yesterday to take part in the Great Alaskan Running Cruise. What is a running cruise? It's a normal cruise, Royal Caribbean to be specific, that includes special running excursions and events. Not everyone on the cruise is part of the 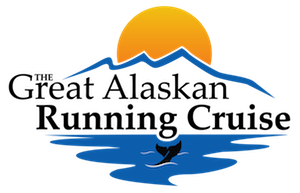 running group; there are about 150 of us. The cruise departs from Seward, Alaska and finishes in Vancouver, Canada.

We booked this trip back in February. It was actually my Valentine's Day gift to Greg because I knew that he had always wanted to go to Alaska. We actually got in off of the waiting list, as this cruise booked up about nine months in advance.

Alaska Bound!
We arrived in Anchorage yesterday afternoon and we will board the cruise ship this afternoon after a three-hour bus ride to Seward. We had some weather delays yesterday because we flew through Chicago, which had severe thunderstorms. We boarded the first plane, and then deplaned, and then boarded it again, and arrived in Chicago about two hours late. Thankfully, our connecting flight was also late. We got a nice tour of O'Hare International Airport as they changed our gate number several times (picture us booking it from concourse to concourse). Ultimately, we flew out of a gate that was very close to the gate we flew into, so we got some extra exercise yesterday.

Once we were on board the flight to Anchorage, everything went smoothly. Of course, everything was made much more tolerable with our first class tickets, which we got for a steal. I had never flown first class before because it's usually prohibitively expensive and I don't have any sort of status to qualify for free upgrades. But for 8+ hours of flying to only pay $300 more-- we thought it was totally worth it. Especially since it included free checked luggage and we needed to check two bags.

Speaking of bags, packing for this trip was quite the challenge. We each needed three outfits per day (four if you count pajamas). A running outfit, a daytime outfit, and a dressy dinner outfit. Cruise ship dinners require that men wear long pants, collared shirts, and dress shoes, so planning for that took up almost half our luggage space. Furthermore, the weather in Alaska in July ranges from the low 50's to the upper 60's, and it could be rainy or sunny on any given day. It's kind of like packing for a marathon, a wedding, a beach vacation, and a touristy vacation, and you're doing each of those things every day.

Anchorage Welcome
We arrived only one hour late, which was pretty incredible due to all of the delays. We had about an hour to get situated in our hotel and then we were off to the packet pickup and welcome meeting. The Skinny Raven running store was just two blocks from our hotel, and it was the largest running store I had ever seen! It was probably five times as big as the running stores we have in northern Virginia.

We met the other people who would be on our cruise. As expected, it was a diverse group with a wide range of ages. We were given a name tag and three bibs: one for each of the timed events. The first event would be a 5K fun run, which wouldn't be timed, followed by beer and pizza. This started about an hour after we received our packets.

I had informed my coach of all of the planned running events on the cruise and he wrote me a
schedule that included them. For the welcome 5K, he suggested that I run it as a tempo, and then run 10 x (1 minute hard, 1 minute easy) afterward if I had time. Because Alaska is four hours behind the eastern time zone, it already felt like 8:00pm, and my normal bedtime is around 9:00! Plus, we had been traveling all day.

Greg and I decided to get the 1-minute intervals out of the way first because we had about 30 minutes to spare before the welcome 5K. And once we were done with the 5K, we would want to eat dinner and get to bed pretty quickly. We warmed up for one mile, and the began the 1-minute intervals, We ran up and down the residential streets near our hotel, staying close to where we'd meet back up with the group for the 5K. I felt pretty good, considering I had been traveling all day long.

The Moosehead 5K
Once we were done with our short workout, our group headed down to the water, where we ran on the Tony Knowles Coastal Trail. The 5K fun run was simply an out and back on the trail. The views from the trail were amazing! And at 68 degrees with low humidity, the weather felt heavenly.

Our focus during the 5K was to soak it all in and enjoy the experience. We knew we'd be visiting the trail again the next morning, when we would stop for photos and capture everything. We had gorgeous views of the water, the mountains and the forests. Our splits were 7:42, 7:27, 7:04, and 6:45 for the last bit, which yielded a 22:57. It felt really invigorating to run fast on this trail and we were both really excited to finally be in Alaska. Especially after having spent 8+ hours on a plane.

After the run, we all went back to the running store where we had pizza and beer. I was starving. It 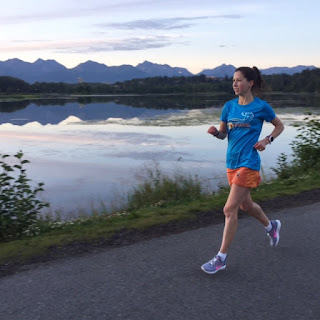 was after 10:00 my body time! I finally got to meet fellow blogger Zenaida, whose blog I have been reading for over five years! We didn't stay very long because we were so exhausted. It felt really great to finally get some sleep.

Easy Run Along the Coast
This morning, Greg and I had some time before our transfer to go running. Of course, we woke up at around 3:00am, and the sun rose really early. We were out on the trail by 5:00 and it was pretty much deserted. This time, we went for an hour-long easy run. We went father on the trail than we had the day before and it was absolutely stunning. And at 51 degrees, the air felt marvelous. We're used to it being in the low 70's with insanely high humidity!

After our run, we went to a small coffee shop for breakfast. What a perfect way to start the day.