The July 4th Race that Wasn't 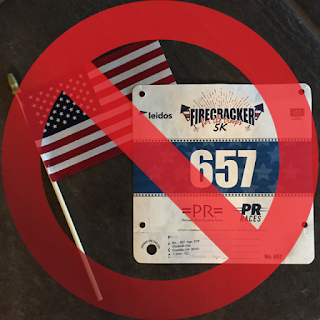 Today I was supposed to run the Reston Firecracker 5K. I've registered for this race every year since it began in 2010, but I've missed it almost as many times as I've actually run it due to illness or injury.

In 2012, I came down with mono two weeks before the race. I didn't realize it was mono at the time, though, and I was feeling recovered enough to run, so I took the race at an easy pace of about 9:00. A few days later, I relapsed into mono full-force.

In 2013, I was in excellent shape and ready to totally crush the race, but then I got injured just three days beforehand with a stress reaction in my shin.

After over two years of not being sick, I came down with something nasty on Thursday. I had not been sleeping well for the past week, averaging only 5-6 restless hours a night. I knew this was a problem, but I seemed to be having enough energy for my workouts and I felt fine during the workday. I had been waking up in the middle of the night with a raw throat, but I had chalked that up to allergies. Everything else felt fine.

I ran 50 minutes on Thursday morning and I felt amazing. The temperature was unseasonably cool at around 60 degrees, and my normal "easy" pace (which is run by effort level and  heart rate) dropped down to an 8:42 pace. I felt amazing and my heart rate didn't indicate any issues. But three hours later, at work, my throat started to get really sore and a fatigue came over me. Almost instantly I knew I had to go home and sleep. I cancelled my plans to meet a friend for lunch, drove home and slept for over an hour. When I woke up, I felt weak and I knew I was full-on sick.

Of course I was hoping this was just a cold that would pass within a day or so, but my body doesn't work that way. I seem to be an all-or-nothing person, and when I get sick, I usually get really sick. So since then, I've been extremely weak with body aches, a mild sore throat that comes and goes, pressure behind the ears, and general fatigue. I was optimistic that things were improving on Saturday because I took a shower, dried my hair and went to the grocery store with Greg. But then on Sunday, I was back to square one again, and today nothing has improved. Obviously this meant no Firecracker 5K. At least the decision was made for me, and I am not left wondering if I could have possibly done it. There's no way I could do it- not even walk it. I'll go to the doctor tomorrow if there continues to be no improvement.

It's days like these when I need to draw on all the mental toughness skills I learned over the past four years. There's a voice inside of me that wants to scream and cry and say that I did all those hot summer track workouts for nothing. That voice says this is so unfair, and now all that fitness is lost and I'm going to be way behind when I start running again. It says that this is a repeat of my mono, and it could last a month or more. I'll be in bed all summer and by the time the cool weather comes around, I'll be totally out of shape.

But I've gotten really good at shutting that voice up and just focusing on getting better. I've been sleeping a ton (I actually napped while Greg was running the race), drinking loads of fluids and eating really healthy food. The hardest thing is to not speculate about how long this will last and to try and stay positive. Usually viruses like this do not last as long as my mono did and I should be better within 1-2 weeks. I have to remind myself that I will run again because when I feel this weak, I couldn't even imagine running. 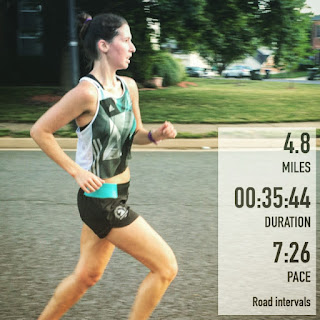 The 1-minute intervals were supposed to be at slightly faster than 5K pace, and they averaged around 6:30-6:35. The 30-second intervals averaged around a pace of 6:10. What made this workout hard was two things: first, it was not on a flat course, it was gently rolling hills. Second, the recovery jogs were prescribed to be "brisk jogs" not just easy jogging. So those were around a pace of 8:50-9:10. Usually recovery jogs are anywhere from 10:30-11:00 per mile.

The great thing about this workout is that I realized I had done this exact workout before. I looked back in my log on February 2, and I had done this workout on a 32-degree day, on a flat course, with truly easy recovery jogs. Instead of logging 4.8 miles, I only logged 4.4!  So now that it's hotter and hillier, I'm able to run faster than I did back in February. Once again, an indication that my fitness is at an all-time high.

On Friday, June 24, I ran a really challenging track workout that I had never done before: 7 x 800m at 5K pace with only 30-second rests. 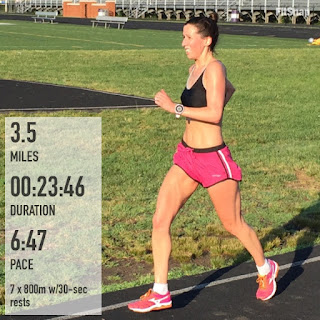 Typically when running 800m intervals, I run them faster than 5K pace. But I also get at least 2 minutes to recover. So this workout basically had me running at 5K effort for longer than a 5K, with very short rests along the way. It was 73 degrees, sunny and humid.  My splits were as follows:

Given that the race weather ended up being about 8 degrees cooler than this workout and overcast, I am pretty confident I could have run this pace, even with the hills. Let's just say I could have done it!

I really hope I wake up feeling dramatically improved tomorrow and that I don't have to go to the doctor. This just really scares me because it feels exactly like mono, and I know there are different strains of the mono virus. Greg has been amazing throughout all of this, doing all of the cooking and cleaning, and making me my special "potion" of warm water, honey, and apple cider vinegar. He ran the race in 21:01! He's been doing these workouts too and they've made him noticeably faster.

Fingers crossed for a speedy recovery.