Believing in My Book, My Message, and Myself 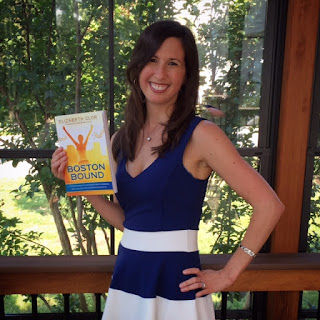 In spite of all the struggles and mental barriers that I had to overcome to qualify for Boston, I never gave up. Even when others told me that maybe the marathon wasn't my thing, I still kept trying. I held this same attitude about my book.

As I was finishing my book last winter, I did quite a bit of research on how to get it published. I decided that I would first send it to agents and publishers and try to get a publishing contract. This would mean handing them the manuscript and letting them format it, design the book cover, edit it, and market it, leaving me with a very small percentage of the royalties. It was the most traditional route and I thought it would result in maximum exposure for my book. However, I knew that agents and publishers received thousands of book submissions each month and could only accept a small number of them, so I was prepared for rejection.

I sent my book pitch to about 25 agents and 3 publishers. Of all of these, there was one particular agent and one particular publisher who I thought were really great fits for the book. I decided to wait until I had received feedback from the other agents and publishers before sending to these last two, so that I could incorporate any feedback I received. I wanted to make sure I was putting my best possible foot forward when I reached out to these two organizations.

It wasn't long before the publisher and the agent replied back with rejection letters. The publisher was rather vague, saying that the book did not fit into their lineup. The agent, however, sent me a very detailed response. The agent had run the Boston marathon herself (which is why I thought she would be a great fit) and based on her feedback, I realized that if I wanted the book to be published, I would have to do it myself.

So I published the book myself, not really knowing what to expect. After all, what was the worst that could happen? Well, maybe nobody would buy the book and I would lose the money I spent on getting the book cover designed. Oh well, at least I could say I published a book! And the best case scenario would be that people would buy the book and they would find it helpful in their own journey. I had no idea if the book was objectively good since the only people who reviewed it were friends and family. But as I said, what did I have to lose? The book was already written.

So I put it out there on May 15th.  And the feedback I've gotten from readers totally goes against the feedback I received from the agent.

"I'm afraid this is not something I could successfully represent. I think pretty much any even mildly competitive runner is aware of the negative role that over-stressing can play in their racing. So I'm not sure there's enough of a take-away in your personal story."

Many readers have expressed that they "took away" a great deal from this book: 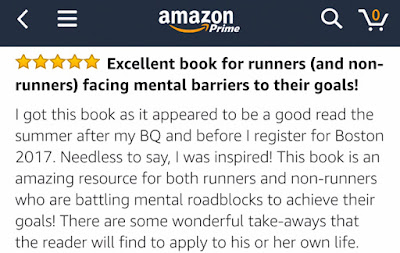 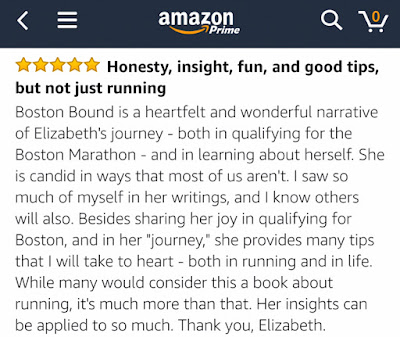 "When an acquiring editor is evaluating a project s/he looks to see what the story/message boils down to and whether s/he feels this will sustain the reader's interest for 300 pages. . .  a project really needs to have a stand out hook and be something that just keeps the reader glued in their seat because they can't stop turning the pages."

I agreed with the agent on this point-- I did not think Boston Bound was a "page turner."  I did not expect readers to be glued in their seats. After all, self-help books are not supposed to be page-turners-- people read them because they want to get something out of it. Much to my surprise, countless readers have said that they could not put the book down. 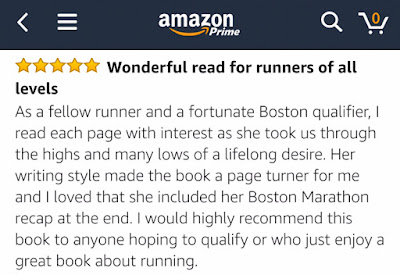 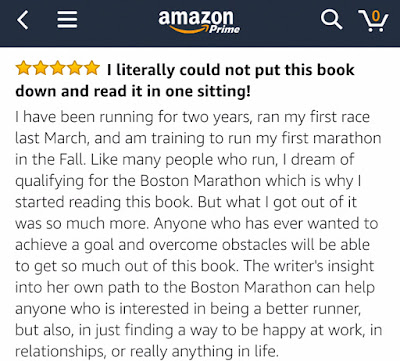 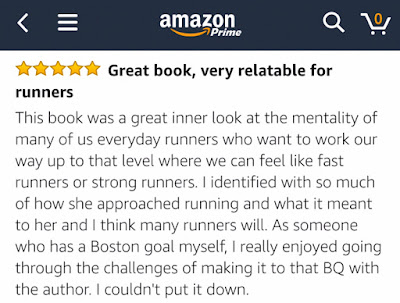 "As more and more people get into running, there are more and more running book projects circulating and editors have become incredibly picky. They are all looking for the next "Born to Run". Elite runners can usually get a deal. But nothing much else impresses them."

This made no sense to me. If there are already so many books out there about running, written by elite athletes, wouldn't a book written by a non-elite be a refreshing change? Can everyday runners and readers relate to olympic athletes? I think that part of what makes a book good is the ability for the reader to relate to the main character or narrator. 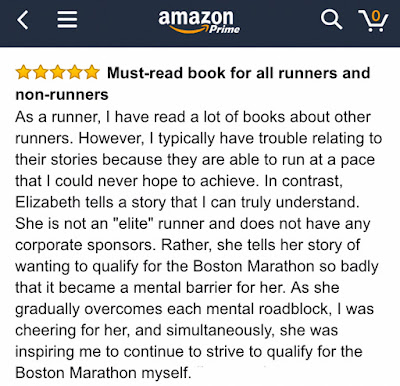 I've also received numerous messages on Facebook, Instagram, Twitter, and even LinkedIn from readers telling me that the book helped them, they couldn't put it down, and/or that they found it relatable because it wasn't written by an elite runner.

Lesson learned, if you truly believe in something, make it happen. I honestly wasn't sure if the book would be a success or not, but I figured I had nothing to lose.

Book sales have already exceeded what I ever thought possible, and it seems to have a life of its own. Initially, it was up to me alone to get the word out. But now it seems like people are hearing about the book from all sorts of channels! I will likely blog more about the book in the future and my "journey" in getting it on the best-seller's list for the "Running and Jogging" category!