Harder Than Running: Not Running

Yes, running is a challenging, tiring and difficult sport. But you know what's harder than running? NOT running! 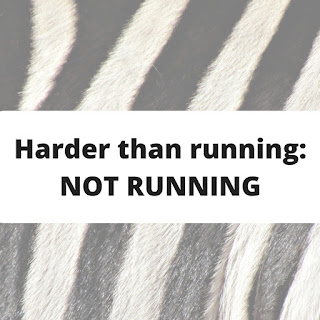 This morning, Greg returned to our house soaking in sweat from his humid hill sprint workout. "That was so hard!" He exclaimed repeatedly. I was instantly jealous that I, too, didn't have that "I worked really hard" feeling first thing in the morning. After having not run since June 30, I miss that. But I quickly shifted my mindset. Because what I'm dealing with is hard work. It's very hard work.

People tend to work hard at the things they are good at. If you're good at your job, you'll naturally want to work hard at it. But people tend to shy away from things that they aren't good at, and therein lies the big challenge. While I think I'm relatively "good" at this mental toughness thing, it doesn't come easy to me. I have plenty of room for growth still.

Right now this newfound mental strength of mine is being tested. I have to truly be "ok" with not running. Optimistic, even, that I will eventually return to my former running self and regain all the fitness that I've lost. That said, what's going on with my health?

As I discussed in my previous blog post, an illness of some sort came on very suddenly while I was at work on June 30. It felt suspiciously like mono, and I went to the doctor on July 5th and they ran a bunch of tests, saying it was probably "a viral infection" and I would get better soon. I have not felt well enough to run yet. My initial symptoms were extreme fatigue, sore throat, and weakness. My lingering symptoms are on-and-off fatigue, pressure behind the ears, occasional dizziness and overall weakness. When I say "weak" I mean that I cannot walk at my normal pace. I do not feel like my normal self. I know from having mono four years ago that I should not run when I feel weak.

I took off the last week from work entirely, and went into the office Monday and Tuesday of this week. Today, I had a doctor's appointment scheduled for 11:00, so my plan was to work from home in the morning, go to the doctor's and then into work. 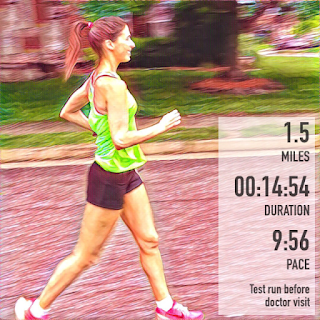 Given that I felt mainly human for most of the day yesterday, I figured that I could give running a shot this morning. The main reason was so that I could "test it" and report on how it felt to my doctor. I decided I would do a 15-minute run at a very easy pace. I figured this should not be a strain on my system at all, given that I was used to running so much longer/faster every single day. Energy-wise, I felt pretty good. It was nice to be out running again. But as soon as I started, the outside of my knees felt really odd. They ached. And then a few minutes into it, my lower back/upper butt area started to feel really sore. As if I had done some really tough workout there.

Even though I felt reasonably energized during the run, when I got home, I had to sit down with my head in my hands for a minute or two. And then suddenly I realized I felt much worse than before I ran. Not a good sign. Shortly after, Greg returned from his hill sprints and I had to fight the urge to start crying and throwing a pity party.

11:00 rolled around and I met my mother at the doctor's office. The original plan had been for her to drive me, but I've been well enough to drive (not dizzy) for the past few days. I saw a different doctor at the same practice. The doctor I saw on July 5th was the person who was staffing the walk-in clinic. The doctor I saw today was their sports medicine doctor. I wanted someone who understood the role that exercise was playing here, and would be able to tell me when I could return to running. The doctor spent over 30 minutes with my mother and me. He told me that my lymph nodes were swollen and that the areas that felt sore during my run were joints. That was joint pain- the upper butt/lower back area of soreness is the sciatica joint, and the knees are obviously joints.

He looked over my test results and ruled out Lyme disease, thyroid issues, and a number of other things. The test results did indicate that I had mono in the past, the Epstein Barr Virus (that causes mono) never goes away in your body once you have it.  He said that the virus can mutate just enough so that your body is no longer immune to it, and it can re-activate in the body, causing an entirely new round of sickness. The virus doesn't show up in blood tests until 3+ weeks after the initial onset of the infection (June 30). So, it's still too soon to know for sure. But, this doctor was pretty sure it was mono, and if it wasn't mono, it was something very similar to it, based on all of my symptoms- swollen lymph nodes and extended fatigue in particular.

My history with these types of viral infections is interesting:


So the commonalities of 2008, 2012, and 2016 are that each time, it was triggered by pushing myself in warm weather. I had been running very intense workouts in the heat throughout the month of June.

The good news
Looking on the bright side, here is the good news. I am not suffering from "overtraining" because that tends to come on gradually and usually does not include a sore throat, etc. This means that once I make a full recovery, I can still train at the same intensity. I just need to be careful in the heat to keep my immune system strong.

I should make a complete and total recovery. Although it seems like I'm doomed in the summer of 2020, I should be perfectly fine between the time I recover and then! Also on the good news side, this is not Lyme disease, MS, cancer, or the host of other things I was worried about it being.

The bad news
I will probably not feel 100% recovered for eight weeks, and that's IF I'm smart about easing back into things. This puts me at late August.

I had planned to run the South Lakes 10K in late August and then the Rock 'n' Roll Philadelphia half marathon in mid-September so those are both out. My fall marathon may be at risk, but I am still hopeful I can run that, even if it's not the 3:20 I was originally going for.

Now for the really scary part. The doctor told me that the joint pain and weakness I was feeling in my legs was the result of Immune Complex Syndrome. I did not have this issue when I had mono in 2012-- this is new. Immune Complex Syndrome is when your immune system doesn't fully shed the virus from its cells, and it ends up in your joints. This could mean joint pain and the feeling of arthritis for up to six months. So even if I am feeling 100% recovered by the end of August, the aches that I felt on today's run could be my new normal until January.

Needless to say, I left the doctor's office in tears. I had such high hopes for the fall racing season, and now I have to re-evaluate everything. My mother was happy with the outcome because the doctor did say I would make a full recovery. But all I could hear was "the joint pain can last up to six months." He told me I could take anti-inflammatories for it. We'll see if that helps. 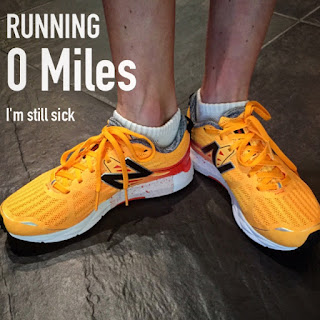 off completely. Aside from my 15-minute jaunt this morning, I've almost made it through two weeks. So, I should be able to return to running on Friday, July 22. That said, this is just general guidance- every person is different. I definitely don't want to spend three months with mono like I did in 2012, so I need to really be cautious and wait even more if I don't feel ready by the 22nd.

The first week back should be "easy"-- no hard workouts, no long runs. Just short, easy stuff. Then the doctor said I can add in more intense stuff on the 4th week. So back to semi-normal training on July 29th. Somehow I feel like this is too optimistic. It took me WAY longer in 2012 to recover. But then again, I kept pushing it in 2012 when I should not have been.

Finally, he said I probably wouldn't feel 100% until the end of August, so while I can train through August, it will need to be a scaled back version of what probably would have otherwise been 50+ mile weeks.

I kind of see all of this as "best case" scenario. Having been through it before four years ago and NOT having this joint pain/ Immune Complex thingee was difficult enough. On the plus side, my initial sore throat and initial sickness was not nearly as bad as 2012. I honestly felt like death in 2012 and my throat was so sore I wanted to remove it from my body. Things were more mild this time, but the lingering fatigue is almost identical. As for my non-running life, I will likely work from home or do half-days at my job for the next week, until I am at that point when the doctor said I can resume "light activity."

Back to it being "hard work." It's really difficult to follow people on social media who are training for fall marathons saying: "This is week three, day 5 of training" and their marathon is one the same day as mine! I guess at this point I will be lucky if I'm healthy enough to run the marathon. I really do not want to drop down to the half, as the Indianapolis Monumental Marathon has been on my bucket list for several years now.

So, I need to stay mentally strong. Focus on drinking a lot of water, taking vitamins, eating healthy, getting plenty of rest, and not getting stressed out. And if I still feel like crap on July 22nd, it's okay. Marathons are not going anywhere- I need to be patient. Very, very patient.