How I Ran the Boston Marathon 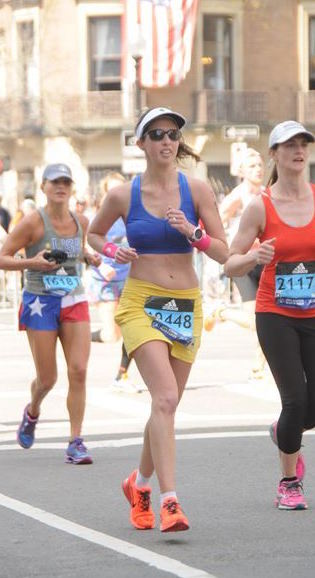 I wanted to write this post about a week after the Boston Marathon, but I was on vacation at a resort in Mexico. The Saturday following the race, Greg and I flew to Mexico and spent a week doing nothing but relaxing: eating, drinking, reading, sleeping, and soaking up the sun. It was just what I needed, both mentally and physically. We purposely planned this vacation for right after Boston as somewhat of a celebratory trip, and so that I wouldn't be training for a race while we were there. It was also a great opportunity for me to take a step back from the Boston experience and truly reflect on it.

As I was running the race, everything felt surreal. It was hard to believe that I was actually running THE Boston Marathon after all these years. And it was hot! And even though I've DNF'ed several marathons due to the heat, I actually embraced the heat and found myself determined to enjoy the race no matter what. What a difference from my former self!

This may sound a bit cheesy, but it almost feels like I was somehow changed by the Boston Marathon-- "initiated" into the world of Boston Marathon runners. Between the time that Greg said goodbye to me at the busses in Boston Common and the time I saw him again in our hotel room, I felt like a different person. Of course, I was the same person, but now I was on the other side. In my book I talk "the haves" and the "have-nots" of marathon running, and I had always seen myself as a "have-not." Of course, that was not a healthy attitude, but now that I was a "have" it kind of felt different.

Another topic I discuss in my book is separating myself as a person from myself as a runner. I, Elizabeth Clor, am not defined by my running or anything I do for that matter. I'm definitely by how I do things. How did I run the Boston Marathon?
I've been asked by several people why I don't try and qualify for Boston 2017 by running another marathon by early September. My response is that I want to spend the summer focusing on getting faster at shorter distances so that I can really crush a marathon in the fall. I'd rather run a really solid fall marathon with a proper training cycle than jump back into marathon training so soon to try and run an early September marathon. I don't want to get injured or burned out, and I find it difficult to do long runs in the heat.

Plus, I've already achieved my goal of running Boston, now I want to try and run a really fast marathon-- somewhere in the 3:20-3:25 range. I think I can do it if the weather is right, but not in early September temperatures. So, I have registered for the Indianapolis Monumental Marathon in November. It's been on my list for awhile and some of my friends are doing it, so I figured it would be a great year. Part of what I loved about training for Boston was "meeting" other local runners on Strava and virtually training with them. We encouraged and supported each other and it will be great to have that for Indy in the fall, too.

Having the vacation immediately after the race and then launching my book prevented there from being a "low" after the race, thankfully! I might not run Boston again for two more years, but there are a lot of wonderful things to enjoy and achieve in the meantime.
at 11:55 AM