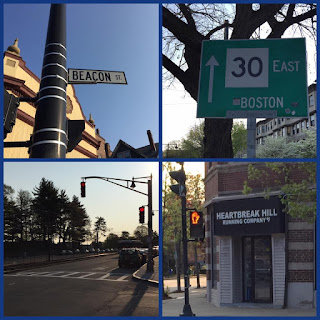 About three weeks after running the Boston Marathon, I returned to Boston for a business trip. I was honored to be speaking at a marketing conference on the topic of social media, and my hotel was enticingly close to the Boston Marathon course. So instead of opting for the hotel treadmill, I took a short Uber ride to Newton-Wellesley hospital, which on Marathon Monday is better known as mile marker 17.

My training plan called for a 60-minute run, and my original plan was to run for 30 minutes, turnaround, and end back where I started. I figured I would get to run most of the Newton hills that way. I brought my phone with me, which was a first, mainly so that I would be able to Uber back after I was done. But a nice fringe benefit was being able to take photos and video. And I actually relied pretty heavily on the Boston Marathon app, which offers a map of the course, complete with a "blue dot" that indicates where you are. I would have probably gone off course if I hadn't had that.


I started my run at exactly mile marker 17 according to the app. That way, I could compare my splits to what they were when I ran the actual marathon. It was a gorgeous day in Newton. It was sunny, 50 degrees, and no wind at 6:30 a.m.--  much cooler than on race day. However, I think it got up to 70 degrees by 11:00am, so the day didn't actually tease me with better racing conditions! There were very few cars on the road, and thankfully the entire route had wide sidewalks that were suitable for running.

Miles 18-19
I began running and was loving the fact that I was back on the course. I definitely remembered the way the course twisted and the small-town feel of the surroundings. Mile 18 was the second of the Newton hills and mile 19 was a downhill. My times were 8:54 and 8:35. In the actual marathon, my times for these miles were 8:23 and 8:16. So, I was actually in pretty good shape still at this point in the race. One of the many things that I was pleased about with my Boston performance was that I got through the first two Newton hills without slowing down too much. According to my coach, most people really slow down on the first one, but I stayed strong.


Miles 20-21
Time for Heartbreak Hill! As I expected, this hill was not incredibly steep, it was just kind of long. Her's a video of me running up it. You'll want to turn your speakers on to hear my narration!


It was nice to be running up that hill without hurting! And, I ran it faster than I had done during the marathon, because I didn't have 20 miles of hot running on my legs. My paces for these miles were 8:48, 9:08 and during the marathon they were 9:10 and 10:06. Even though I don't plan on running Boston again for another two years, I think this run helped give me perspective. And now I know which hills I train on are most similar to Heartbreak.

My original plan had been to turn around, but I couldn't resist-- I had to keep going and see what was ahead. I figured I could just take an Uber back from wherever I finished.

Miles 22-23.7
As I started running these miles, I realized that I had zero recollection of this part of the course. I had been in so much pain, that all I could focus on was moving forward and telling myself to keep pushing. So, this seemed like an entirely new experience. Here's the video!

I really didn't want to stop-- I wanted to run all the way to the finish line! But my plan only called for 60 minutes and I had the conference to get to. I was able to see the tall buildings of the city off in the distance when I stopped at 23.7, but I wasn't officially in Boston. 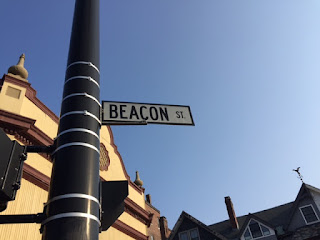 I really love that I was able to re-visit this course so soon after the race itself. It's crazy that 364 days out of the year, the course is a relatively quiet two-lane suburban road. On Marathon Monday it's completely transformed into something almost magical. I had actually expected to see more runners out at 6:30 a.m. but I only encountered 3 or 4 of them.

During my flights to and from Boston, I took the opportunity to do one last review of Boston Bound. I had a prototype copy and it was surreal reading my own book, called Boston Bound on a plane to Boston. Now that the book is published, it's an entirely different feeling. But I'll save that for a separate blog post.