The actual name of this race is the Semper Fi 5K, but I took the creative license to change it to Semper Five K in the blog title for the fun of it. I had never run this specific race before, but I had run this course a number of times. It's an out-and-back course that's pancake flat with no other turns aside from the turnaround point.

One of the reasons I chose to run this race was because I wanted to run three locally "ranked" races before the end of June, and prior to the Boston Marathon, I had not run any. Three races in the first half of the year is the minimum requirement to be officially ranked by Washington Running Report. The first of these was the  Mother's Day 4-miler just two weeks ago.

It was a very, very, VERY wet morning in Washington, D.C. Rain was coming down in buckets and at only 55 degrees, it felt more like early April than May 21st. My race weather so far in 2016 has been a bit extreme:


By contrast, almost every race I ran last fall had perfect weather, so I can't really complain- I was due for some weather-related challenges!

Before the Race
The parking for this race is about 3/4 a mile from the race start, so Greg and I couldn't just wait in the car for the race to begin. We needed to get our bibs and warm-up, and I made the mistake of leaving the car too early. The race started at 8:30 and we left the car at 7:40, which meant 50 minutes of being out in the pouring race before we even started. Even though Greg and I both had light jackets for the warm-up, they didn't really stand up to the heavy amount of rain that was falling.

We ran to the starting area, got our bibs, and then ran for another 20 minutes. This resulted in a 3.1-mile warm-up, which is longer than I usually do for a 5K. However, it was necessary to keep moving to avoid shivering in the cold. During the warm-up, I decided that my goal was to run the race at a pace of around 6:40. My PR pace is 6:42 from last fall and is on a hillier course. Given that this was a flat course and I was still in excellent shape from my Boston training, I thought I had a shot at shaving a few seconds off of my PR. During my training for Boston, I had done a workout of 4 x 1600, and all of those miles were sub-6:42. So, naturally I thought that in a race, a 6:40 pace was reasonable.

Mile 1-- 6:40
Thankfully, the race started shortly after our warm-up so we didn't have to wait around too long. I noticed at the start line that it looked like a competitive field. Last year, the female winner ran a 22:04, so I assume that some of the faster runners saw that result and showed up in an attempt to win. This year, over 10 females ran faster than last year's winner!

Anyway, I placed myself toward the front of the pack and as a result, shot out at a pace of around 6:10. It didn't feel like I was running that fast so I had visions of crushing my PR right from the beginning. But I backed off the pace after realizing how fast it was. Greg, on the other hand, did not back off the pace and ran his first mile in around 6:27. This first mile felt really good and I was optimistic about how the rest of the race would go.

Mile 2-- 6:50
I maintained the effort, I was pushing really hard, and was therefore surprised to look down at my Garmin halfway through the second mile to see that I was running a 6:55 pace. I run tempos at
around a 7:00 pace, and this felt way harder than that! Once I saw that number, I pushed harder and harder but I realized that my body couldn't go much faster and I started to feel tired. I didn't have the same amount of energy to push as I did in the 4-miler two weeks ago. I realized that I was less peppy and no matter how much I told myself to push and that I knew I was capable of faster, my body just wasn't cooperating. I was able to pick it up to the extent that I ran a 6:50 for the second mile, but I was definitely off of my goal. I was able to close the gap between Greg and me slightly, I had him in my sights the entire time, and he was about 10 seconds ahead of me by the end of mile 2.

Mile 3--6:47
I felt like I was really out of gas during this mile. I was giving everything I had in me, but my Garmin just wasn't showing the paces that I thought would have corresponded to that effort level. I really wanted this last mile to be faster than mile 2 so toward the end, I made myself hurt even more than I thought possible and I think I ran the last quarter of that mile at around my 6:40 target pace.

Last 0.13-- 6:18 pace
I could see the clock at this point and I really wanted to break 21:00. I've only ever broken 21 minutes once before, and that was my PR race. Based on where the clock was and where the finish line seemed to be, I was certain I would do it! But I guess I mis-judged things because the clock turned 21 just seconds before I crossed. I have to admit I was disappointed.

After the Race
I wasn't my typical happy self after this race. It was harder than expected to run the paces that I did, I was wiped out, and I was miserably cold and soaking wet. Because I knew there were quite a few fast 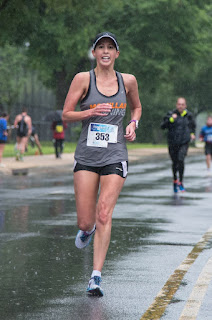 women ahead of me I decided not to wait around for the awards. I wanted to get out of there ASAP and into the warm car and dry clothes. I think I had gotten my hopes up about how fast my time would be, given that it was a flat course and cool weather, and thinking about how fast I had run while training for Boston.

When we got to the car, I looked at the official results on my phone, and it turns out that I had won first place in my age group! Most of the fast women ahead of me were in their 20's. That made me wish I had stayed to get my award, but I definitely didn't want to go all the way back there in the cold rain.

In terms of the positives, this race was great practice in pushing myself. Looking at the Garmin and seeing slower-than-expected paces made me push myself harder than if I had run without looking because I have a good idea of my fitness level. I did run my second-fastest 5K ever, and won first in my age group. I also checked the box for another "ranked" race. Also, I wasn't really that far off of my goal. I just didn't think it would be so hard to run a 6:44 pace for three miles.

My plan for the next few months is to work on my speed. My coach has prescribed some tough
workouts that involve very short, quick intervals and I don't think it will be long before my speed is back to where it was during Boston training.  My next two races are ones that I ran last summer, so it would be really fantastic to set some course PRs on those.

In other news, my book has done really well during its first week on the market! Believe it or not, my very first sale came from the U.K. without me even having promoted it. If you have no idea what I am talking about, visit the Boston Bound website to learn more, or "like" the book's Facebook page. 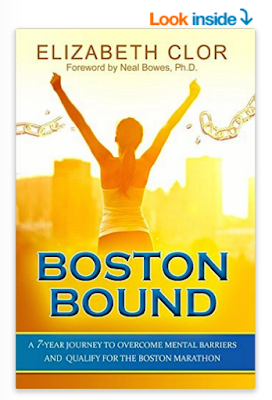