The Houston Marathon is one week away. Yikes, how did we get here so quickly? 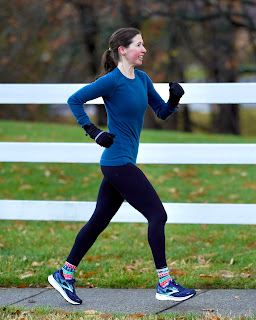 2022 was a pretty good year for running. Not my best in terms of yearly mileage or a PR-setting, but after dealing with Covid and an SI Joint issue in the first half of the year, I gained major momentum starting in June. Working with Greg McMillan has introduced a new training approach and by the end of the year I was feeling WAY stronger and fitter than at the beginning. My biggest highlights were:

I ran 2,298 miles in total which is more than 2021, although not as much as 2019 or 2020. With Covid in January, the SI Joint problem in April, and the Africa trip, I had my fair share of breaks from running.
Houston Training: Mileage
Now, onto Houston. Looking at my training log, my mileage for this cycle was on the lower side for me. But, given that I have been marathon training since late August, it was definitely a long cycle. Not running Indianapolis meant no extended break in November, although I did take a few down weeks around that time. 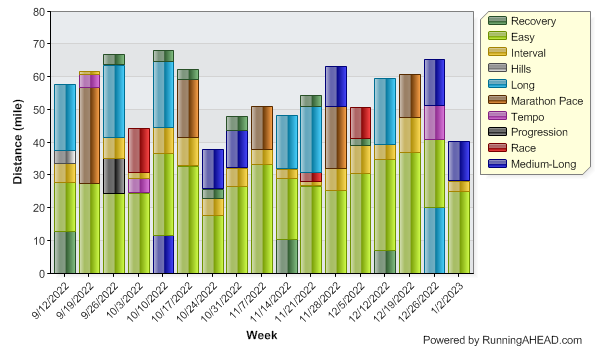 Just looking at the graph objectively, it seems that I didn't train all that hard for Houston. Typical marathon training cycles for me include multiple weeks in the 70s and I didn't hit 70 even once. I only went over 65 three times! But mileage is just part of the story. In exchange for this mileage I ran some really intense workouts and I'll share what I consider to be my best four.
Top Workouts For Houston
When I was training for Indianapolis in September and October, I was discouraged because I didn't have any workouts that made a PR (sub-3:15) seem realistic. I was putting in the work but my paces were slower than I would have liked. And then there was the Hartford Half marathon, which was anything but confidence building! But once the weather was cooler on a more consistent basis, starting in mid-November, things started to change.
It all started with the 19:41 I ran at a Turkey Trot in late November. That race indicated that I was faster than I had realized, and it motivated me on future runs. I ran a 20-miler a few days later and once I hit mile 20, I felt like I had plenty of gas left in the tank. My legs had so much pep at the end of that run. And then, throughout December, the quality of the workouts increased significantly.
9 x 1000m with 90-second recovery jogs (Nov. 29)
My coach gave me this workout because I had been struggling with this effort level in previous workouts. I had done this workout in September and in October, and both times I wasn't thrilled with my speed. I decided to get off the track and take this workout to the roads. With that 5K PR behind me, I decided to really push on this one, and my splits were very consistent around 3:59-4:01 which is a pace of 6:25-6:28. During prior sessions on the track, I had been around 4:09-4:10.
19 Miles with 12 at marathon pace (Dec. 2)
This run was 5 miles easy, 10 miles at marathon pace, 2 miles easy, 2 miles hard. The 10 marathon-pace miles averaged 7:12. WOW. But even more of a surprise were those final two miles which were 6:58, 6:48. Running a 6:48 mile at the end of 19 was huge for me! If only the marathon had been on December 2nd, with that perfect weather in the high 20s. I definitely think I could have run a PR marathon that day, even un-tapered.
6 x 2 miles at marathon pace with 2:00 recovery jogs (Dec. 22)
For whatever reason, I was more intimidated by this workout than any other workout of the entire cycle. Two-mile repeats just sounded hard, and there were a lot of them. Plus, I did this workout on a Wednesday which was before a work day. Splits were 7:30 | 7:26, 7:18 | 7:12, 7:22 | 7:11, 7:13 | 7:10, 7:10 | 7:06, 7:10 | 7:06. Yes- the last two sets were the exact same! Once again, if the marathon had been on December 22 with temps in the 20s, I am pretty confident I would have PR'ed! 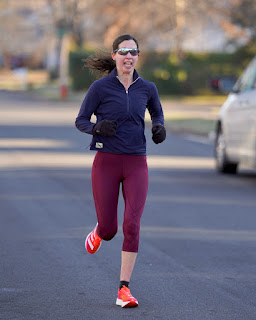 3 x 5K at Half Marathon Pace with 5:00 recovery jogs  (Dec. 29)
This was another intimidating workout, so I told myself not to focus on pace - just effort. I ended up running the 5Ks in 22:11 (7:07), 21:32 (6:56), 21:34 (6:56). With this workout I was most proud of my ability to stay strong during that final mile when I was sooooo ready to stop! This was a killer workout and I handled it well, both mentally and physically.
In addition to these workouts, I did many 20-milers. I think it just feels like more 20-milers than normal because I ran my first 20 in September and I continued on with them through the end of December. I'm mentally burned out on the long runs, at this point and I don't think I could do another one unless it was the actual race!
Houston Goals
If my workouts are any indication of goal race pace, I'd be targeting 7:12. But adding a bit of realism onto that, I'd bump it to around 7:18. The marathon is always harder than training. Adding even more realism, we have the weather forecast, which is problematic as of right now. If this forecast holds, it will be 55 degrees at the start and 65 at the finish. With a good amount of humidity to boot.
I'm committed to running this race and finishing it, no matter what the weather is. But I'm not willing to risk my health and I must do so safely. So goal pace for me is looking like 7:50-7:55 (3:28 finish time). It may seem like I'm selling myself short, but I know what happens to my body when the temperature gets above 55 in a race and it's not pretty. So I will be thrilled if I can finish that race in under 3:30, without risking my health to do so.
Am I bummed about the weather? Yes and no. Yes - for obvious reasons. I won't be able to showcase the fitness I have worked to build over the past four months with a new PR. But no because I'm excited just to get to the start line healthy, knowing that I crushing this training cycle. That's really what's most important and as long as I stay healthy and finish the race I will have a good day. I won't be running another marathon this spring, so I'll need to embrace whatever the day gives me.
I don't train for marathons and build fitness for the sole purpose of setting PRs. I train so I can test my limits, practice mental toughness, and get fitter - no matter what the time on the clock ends up saying. I know that I am in the best marathon shape of my life, or at least the equivalent to what I was in March 2021. And at 44, that's a major accomplishment. 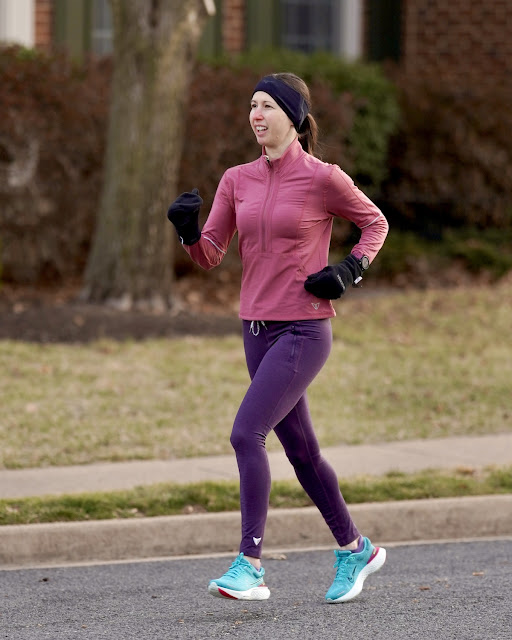