The Turkey Trot is Sacred. 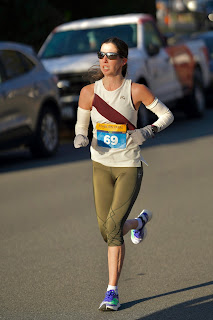 Aside from tradition, the Turkey Trot is sacred because it almost always has good weather. I have only experienced "bad" Turkey Trot weather maybe twice. My ideal racing temperature is around 35 degrees, and late November mornings in this area average around 35 degrees. In addition to good weather, I am usually coming off of a marathon training cycle so my fitness is sharp. Nearly all of my 5K PRs have been set at Turkey Trots, and I rarely expect to PR that distance outside of a Turkey Trot.

This year, I didn't run my goal marathon due to abnormally warm weather. That meant that my fall goal race was actually the Turkey Trot.

The first mile of this course is uphill. The middle mile is mostly flat. The last mile is downhill. It's fast if you know how to pace it properly.

Because I ran this race in 2019, I had Strava data to refer back to. My splits back then were 6:35, 6:41, 6:12. And I had just run a half marathon PR two weeks earlier in 1:30:58. So my strategy was to try and make that second mile faster and keep the first and third mile the same. That middle mile is basically flat, but I ran it slowly in 2019 because of a sustained 20mph headwind. Without the wind, I had a decent chance of being faster there.

Before the Race
I had a Maurten Solid about 2 hours before race start along with some water. I didn't have insane urges to keep going to the bathroom like I normally do on race morning. I went once, and that was enough. Maybe it was because I felt pretty chill about this race, I didn't have "butterflies" in my stomach.

We left the house at 7:10 and arrived at 7:35.  The race started at 8:25. I started my warm up at 7:55, with a plan of running for just over 20 minutes. I took a caffeinated Maurten gel at 8:10 (15 minutes before the race start). My feet were going numb during the warm up and things felt a little stiff. But after some faster running, everything started to feel decent.

I wore my adidas Adios Pro 2 shoes. I had been wearing the ASICS Metaspeed Edge for my summer 5Ks due to the lower stack height and that close-to-the-ground feel. But I noticed that those shoes make me heel strike while watching a video of a track workout. They also don't feel as bouncy as the Adios Pro 2. Another option was the New Balance Super Comp Pacer. I wore this shoe for the track workout I mentioned above. Clearly they weren't doing me any favors and the fit was sloppy around the heel. I did enjoy the ride and the lightweight feel, but I needed something more locked in for racing.

After the warm up, I put my jacket in the car and headed to the start line. Greg is recovering from his groin injury, so during this time he was figuring out the best place to take pictures. At the start line, I said hi to my friends Hannah and Cheryl.

Weather
On my race weather scale, this gets a 10 out of 10. I would actually give it an 11 if I could. And I can because it's my scale, so it gets an 11 out of 10. I couldn't dream up anything more perfect. 35 degrees, partly sunny, no wind. Not even a hint of any kind wind. I wish I could put this weather in a bottle and save it for all races!

Mile 1: 6:34
I had studied this mile closely in my Strava data from 2019 and I had run it during my warm up. As I said above, this course can be very fast if you pace it properly. I went out very quickly, probably around 6:15 because I knew that once the hill started, I would be slowing down. About a quarter mile in, it was time to run uphill. I kept my effort level hard and powered up that hill. I focused on engaging my glutes swinging my arms, and getting to the top. It's not a very steep hill, but it does last for most of the first mile. I kept telling myself that the race would get much easier once I was at the top.

Mile 2: 6:29
I should mention that I was not at all focused on where I was in the field of women. I saw my friend Hannah at the start line and knew she was ahead of me but other than that I wasn't sure how many women were ahead of her. There was even a turnaround point and I didn't even think to look at the runners on the other side - I just stayed focused on pushing really hard.

I told myself that this was the most important mile because I had the opportunity to shave some time from my 2019 split. The final mile would be downhill and I would rely on gravity. But this mile- this mile required focus, the ability to push really hard and tolerate discomfort. I think many runners are afraid to push really hard during the middle mile of a 5K because you still have over a mile to go. But if you know that the last mile is going to be all downhill, you have the confidence to push super hard in the middle mile, and that's what I did. I passed a few people during this mile.

Mile 3: 6:07
At this point, I knew I was likely to PR. And I had to keep telling myself not to get emotional, not to get too excited. I still had work to do. If I let myself get too happy about this, I would coast along. And it's not a PR until you cross the finish line so I actually had to get there, and get there fast. I'm an excellent downhill runner and I flew by quite a few runners. I could really feel the shoes propelling me along too- this is where the carbon fiber plate really shines.

The Finish and Beyond
I ran the final kick at a pace of 6:07 which shows I was happy to keep things steady versus finding another gear. As a result, I didn't have to dry heave at the end. I think my dry heaving comes not from the overall effort of the race, but the fact that I go 100% balls-to-the-wall during the last few minutes and then suddenly stop. With my pace steady, didn't have the urge to dry heave.

But my first thought was "I could have run that race faster". Is that true? Maybe I could have pushed even harder on the final mile. It sort of felt easy because it was all downhill. I guess that's' the beauty of a course that starts uphill and finishes downhill. You get the hard part out of the way without killing yourself and the rest feels easier than it should for race effort.

Greg looked up my result online and found that I ran an official time of 19:41. Well, this was surreal. This was not something that should have been possible! I couldn't even run a sub 6:35 mile on the track last week. Imposter syndrome immediately kicked in. It was the shoes. It was the fast course. It was the weather. It was everything BUT me because I am not a 19:41 5K runner. Nope. That time is too good for me. Was the course short? My Garmin had 3.09 but on Strava, other people who ran the race had distances of 3.1.  And my average pace according to Garmin was 6:23, so this would still be a 19:50 at 3.1. So yes, I did PR. How did that even happen when I felt like I could have run a faster last mile!? Wow.

I guess this is what happens when you train for a marathon for 3 months and then instead of the marathon, you run the 5K. So yes, I deserve this time. Yes, I earned it. (I'm slowly starting to convince myself that this time isn't "too good" for me).

The results had me listed as 4th female, which was a bit of a bummer because there was prize money at this race. But then my friend Hannah and I realized that there was only one female ahead of her, and she should have been second. Unless we somehow missed her? This is still under investigation, but it's possible I was the third overall female. I don't care all that much, a 17-second 5K PR is enough of an award for me.

Does this make bib number 69 my lucky number?!  Maybe!!

Later that day, my friend Meredith texted me and told me she ran the Virginia Run Turkey Trot (the race I ran for 13 straight years). WHAT!? I thought that race was not being held. I'm on their email list and never received an email about it. I'm in the community Facebook group and it was never mentioned! But apparently, yes, it happened. So next year it's back to my traditional Turkey Trot race. I can't believe I broke my streak and missed it this year. Would I have run a time of 19:41? Maybe not, but there's something really special about that race.

Now for the really important part: the cake. I settled on a Dairy Queen Blizzard cake. I know it's cold out and ice cream isn't as appealing as it would be in the summer. But let's face it, I will never PR when it's warm out so if I ever want a PR Blizzard cake, now is the time. We haven't gotten this cake yet, but we plan to get it tomorrow and decorate it with 19:41.